Liberals promise not to abandon child-care 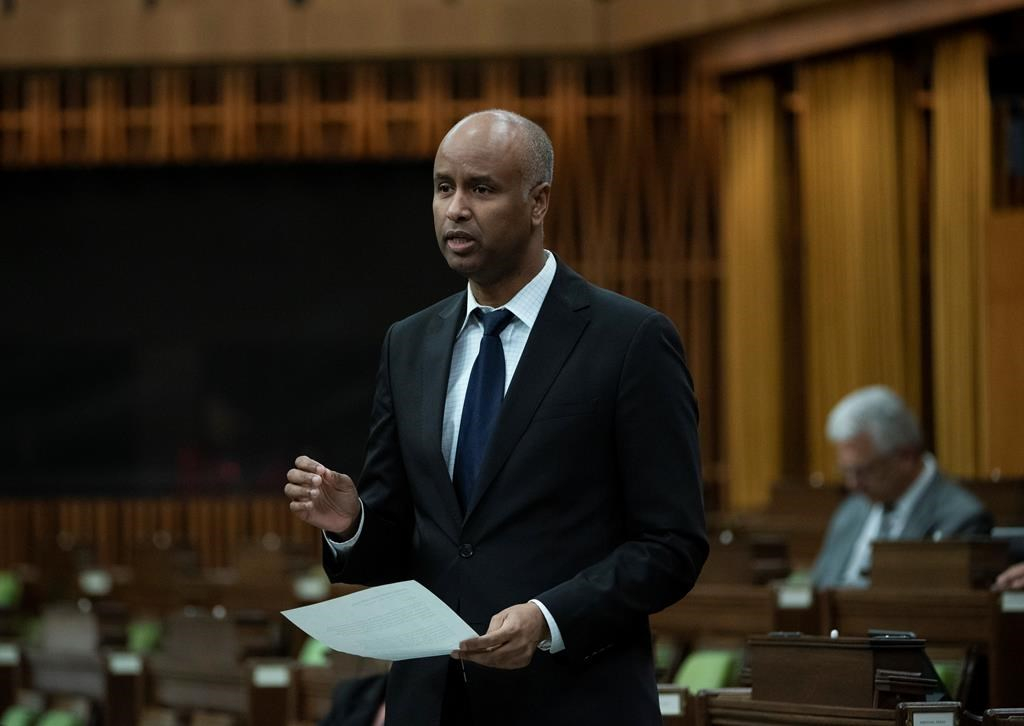 Social Development Minister Ahmed Hussen rises during a meeting of the Special Committee on the COVID-19 Pandemic in the House of Commons on Parliament Hill in Ottawa, on Tuesday, June 16, 2020. File photo by The Canadian Press/Justin Tang
Previous story

The federal minister in charge of the government's child-care agenda says the Liberals won't abandon the sector once urgent, pandemic-related funding runs out before the end of the economic fallout from COVID-19.

The Liberals promised the provinces and territories $625 million over the next six to eight months, which at the most would go to the end of the federal fiscal year.

That money is on top of some $400 million for provinces and territories this fiscal year as part of a 10-year child-care agreement that began paying out two years ago.

As daycares continue to reopen — some at a reduced capacity under public health guidelines — the provision of child care is being tied to getting many parents back on the job, especially mothers, whose job losses have been worse and gains slower than fathers.

In an interview, Social Development Minister Ahmed Hussen said the Liberals had a high ambition for the sector, and reiterated the government would follow through on a campaign pledge to create 250,000 before- and after-school spaces.

He suggested the Liberals might look to do something more in the next fiscal year.

"This is a very important sector. It's a priority for our government," Hussen said.

"There is simply no viable recovery without a strong child-care sector. That tells you that this is a sector that we will stand by and support all the way, beyond the (next) eight months."

Hussen was in the Toronto area Monday to tout a planned increase to the value of the Canada Child Benefit that kicks in this month. The maximum yearly benefit will now be $6,765 for each child five and under, and $5,708 for each child age six to 17.

The Liberals had originally planned to increase the value of the benefit to inflation beginning this week, but moved up plans two years ago under a sunny economy that was seeing regular job growth.

Now, things are much different.

The federal minister in charge of the government's child-care agenda says the Liberals won't abandon the sector once urgent, pandemic-related funding runs out before the end of the economic fallout from COVID-19.

The country is still trying to regain roughly half of the nearly three million jobs lost over March and April. A recovery to pre-pandemic levels could take two years or more based on the central bank's outlook that could change if, for instance, there's a harsh second wave or the quick emergence of a vaccine.

Along with steeper job losses than men, a report from RBC last week noted "an alarming trend" of women falling out of the labour force — meaning they lost their jobs and opted not to go looking for new work — at a higher rate than men. The report said child-care policies will be "crucial to keeping women engaged in the workforce" in the near-term.

Hussen said the funding in the "safe restart" agreement matches what provinces, territories and child-care experts pitched to help the sector manage the immediate costs of COVID-19.

He added the pandemic money will be aimed at helping daycares pay for protective gear, cleaning supplies and extra space needed to reopen safely, although exact details are still being worked out.

What the government has been hearing is a need to work out spending beyond the end of the federal fiscal year so a recovery doesn't falter by parents being unable to work due to a lack of child care.

In a report to be released Tuesday, the Canadian Centre for Policy Alternatives puts some figures on the request. The report calls for a doubling in federal funding to $2.5 billion for the restart, which would also include money for Indigenous communities.

Beyond that, the report suggests $2 billion for the next fiscal year, increasing by $2 billion annually, which would be a faster pace than what the Liberals have planned for their 10-year, $7 billion child-care deal.

"We need a clear plan to address the lack of child care and the difficulties faced by schools," NDP Leader Jagmeet Singh said in the House of Commons. "The federal government has to step up with funding to support both of those things."

This report by The Canadian Press was first published July 20, 2020.

If we actually get a

If we actually get a federally regulated daycare program(not looking good for Doug's Ontario probably) it will be a big win for ordinary working moms and dads now paying $2000 / month for daycare in Toronto and surrounds.
I will believe it the day after I see it . Been waiting 40 years to have a promise come into fruition.

More Ontario regions to start stage 3, but not Toronto — yet