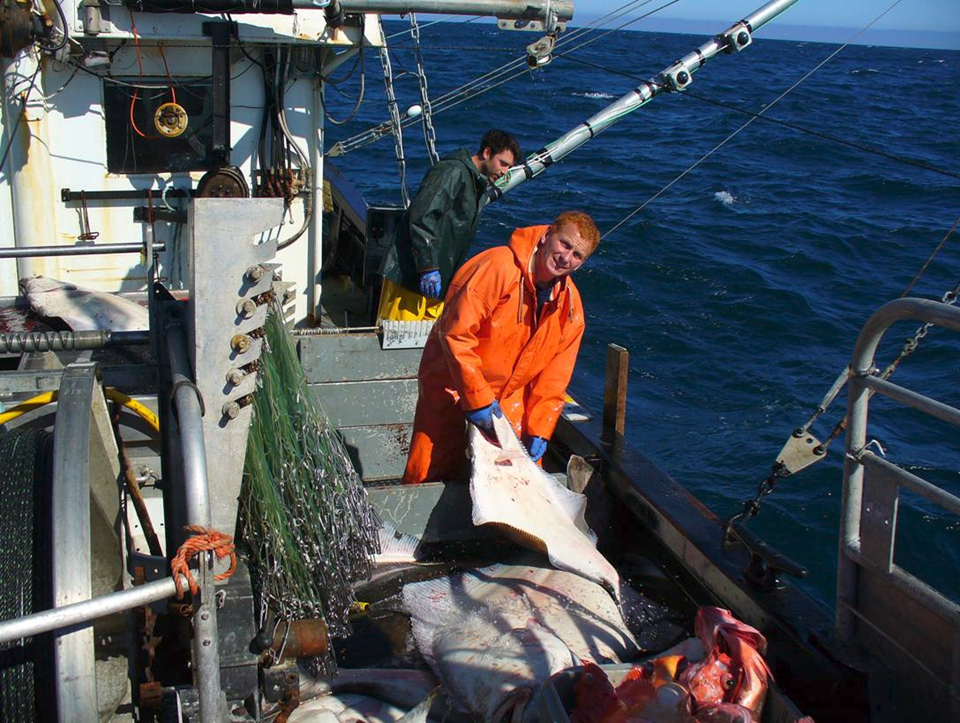 Fourth-generation fisherman Wes Erikson would like to see the government set up and enforce a system that ensures harvesters leasing quota get a fairer deal. Photo: courtesy Wes Erikson.
Previous story
Next story

Wes Erikson has spent his entire life working the waters of B.C.’s west coast, working gruelling hours on deck in some of the worst kinds of weather.

A fourth-generation commercial fisherman, Erikson started fishing on his father’s vessel at the age of five, graduating to paid deckhand by age eight. By 19, he’d purchased his first boat — and its associated halibut licence.

“Everybody who has ever been a fisherman was drawn to it because of the freedom,” Erikson said.

As a young person, the money was also big draw, and if you worked hard you could get ahead and earn a living, the 52-year-old said.

But money, freedom or even a viable living from the sea are in increasingly short supply on the B.C. coast, especially for young fishermen, said Jim McIsaac, vice-president of the Canadian Independent Fish Harvesters’ Federation.

The number of people that can fish for a living is dropping because the cost of buying or leasing the Individual Transferable Quotas (ITQs) — which grants access to fish — is so high, McIsaac said.

The federal government allows a limited amount of each type of fish to be caught.

"Slipper skippers', who have never fished a day in their lives, are leasing quota to commercial fishers who can see 85 per cent of their catch going to quota and licensing fees,” Gord Johns, NDP Fisheries critic on who benefits from B.C's fish.

And ITQs, or quota, are the permits, which attached to fishing licences, allow the holders right to catch a certain quantity of that fish. ITQs can be freely traded or leased.

The problem, McIsaac said, is that on the West Coast of Canada, the ownership of fishing licences and ITQs are not limited to fishermen.

Over time, a sizeable chunk of the available ITQs have been bought up by corporations, as well as Canadian or foreign investors, who have never worked a fishing boat, he said.

As ITQs can be bought and sold or leased, like a precious commodity, speculation and demand has driven up the price.

So fishermen, particularly young people with less access to capital, are being locked out of the market, McIsaac said.

“There are fewer new entrants coming into fisheries, and fewer young harvesters,” he said. “And part of that is because it's so tough to compete against large corporations and foreign interests.”

This decline in the number of fishers, coupled with revenue no longer staying in the hands of small independent fish harvesters, is contributing to the steady death of coastal communities, especially along the north coast, McIsaac said.

“All the well-being factors (in fishing communities) are in decline,” he said.

“Drug and alcohol abuse is up, suicide is up, but investment is down, the retention of youth is down, and the number of jobs is down.”

The federal government needs to act to ensure the social, cultural and economic benefits of fishing licences and quotas fall into the hands of independent fish harvesters, First Nations and small fishing communities, McIsaac said.

How did this happen?

The development of the ITQ system in the 1990s was to make fishing safer and promote the conservation of fish stock, said Erikson, who is also a member of the Halibut Advisory Board to the Department of Fisheries and Oceans (DFO).

“The line of the day was that there were too many fishermen chasing too few fish,” Erikson said. “We had to do something about it.”

By developing the ITQ system, fishermen with quota had a guaranteed portion of the catch, and no longer had to beat out other fishermen to get it.

With the elimination of competitive fishing, safety improved, because harvesters no longer had to head out into dangerous weather to secure as much fish as they could in a time-limited frenzy, Erikson said.

Also, ITQs — paired with stringent monitoring — stopped overfishing, and have improved the sustainability of the halibut and ground fish fisheries to the extent that they now act as a conservation model for the rest of the world, he said.

However, quota is a limited resource, with more people wanting access to it than is readily available, Erikson noted.

The ITQ system can result in a smaller, more lucrative fishery, and market demand contributes to the increased sale or leasing price of quotas.

This means that the majority of quotas end up in the hands of those with better access to capital, Erikson said.

“As a result of the law of unintended consequences, other problems arise,” he said. “Now it’s so valuable as a commodity, it's hard for young people to access the industry.”

As such, the ownership of ITQs has shifted over time.

In 1991, when B.C.’s halibut fishery began the transition to the current licensing and quota system, independent fishermen owned 90 per cent of the quota.

By 2016, those numbers had crashed: Only 15 per cent of active fishermen owned their licences and quotas, researchers at Simon Fraser University found.

This has led to a rising “investor class” of corporations, investors or retired fishermen, some of whom lease out licences and quotas that cost the majority of a fisherman’s catch.

James Lawson, a Heiltsuk fisherman in his early thirties, agreed he feels locked out of the industry.

He comes from a multi-generational fishing family and has worked as a commercial fisherman for more than a decade — yet can only afford to lease his licences and quota.

In some instances, McIsaac said, if there is a dramatic drop in the price of fish after a fisherman pays a set lease price, they actually find themselves in debt if they hit the water.

“You have a young harvester saying ... I had to dig into my own pocket to pay for my expenses and crew because the market was lower,” McIsaac said.

There needs to be a contract system in place between fish harvesters and ITQ owners that doles out the benefits and risks of leasing more equitably, stressed McIsaac.

“In B.C., 'slipper skippers,' who have never fished a day in their lives, are leasing quota to commercial fishers who can see 85 per cent of their catch going to quota and licensing fees,” said Johns, MP for Courtenay-Alberni. “It’s just fundamentally wrong.”

Additionally, there is a critical lack of transparency around who actually owns licences and ITQs in B.C., Johns said. Financial details around the sale and leasing of licences and quota is not public either, he added.

The curious thing is most problems around ITQ and licence ownership are limited to B.C., Johns said, saying the situation on the East Coast is better.

“It’s like we live in two different countries,” Johns said.

Owner-operator policy on the Atlantic Coast, and in Alaska, means people who fish — commercial boat owners — hold most of the licences and quota, Johns said. As a result, fishing communities on the Atlantic coast are in better shape than in B.C., he added.

To address the problem, the Standing Committee on Fisheries and Oceans was tasked to examine the issue and come up with solutions, said Johns, a member of the committee.

The result was a report, tabled last May, with 20 recommendations or steps the federal government and Ministry of Fisheries and Oceans could take to improve the situation in B.C.

One important recommendation called for a new system for agreements to better divide proceeds from fisheries between quota or licence holders, processors and harvesters, Johns said.

Equally important was the call to stop the sale of fishing quota and licences, which involves a national resource, to non-Canadian owners, Johns said.

“I think these are things that even non-fishers can agree on. It’s a Canadian resource and it should be in the hands of Canadians,” Johns said.

The committee also wants to see a public database developed to monitor who actually owns fishing licences and quota, and data on the sales or leasing of those items.

The committee’s report was tabled a year ago, but the Ministry of Fisheries and Oceans has yet to provide concrete steps it plans to take, or a timeline for action, Johns said.

Fisheries Minister Bernadette Jordan's response to the report was presented to the committee in a letter June 30.

Jordan stated the report will help guide the federal government to improve transparency, and revise policy to achieve social, economic and environmental objectives.

However, responding to the immediate challenges of the pandemic on the fishing sector was the ministry’s priority, Jordan wrote.

As recommended, the ministry is doing a comparative analysis of the both the West and East Coast fisheries to identify potential gaps in the Pacific management system, Jordan added.

As well, a review of foreign ownership in Canadian fisheries has been initiated, but specific tools to deal with issues that might arise haven’t been determined, the department of Fisheries and Oceans (DFO) stated in an email to Canada's National Observer on Tuesday.

“We appreciate the government’s response and that they are looking at it,” Johns said. “But it’s not enough. They need to take action and (provide resources for) this, and we need a timeline of implementation.”

Erikson thinks the recommendations outlined in the fisheries committee report are positive and hopes the government will act on them.

“I think they are wonderful. I don’t think speculators should be involved in owning quota,” he said.

“But at the same time, no one wants to go back to the type of fishing we used to do, which was a competitive, free-for-all fishery that was highly dangerous.”

Erikson cautioned throwing the baby out with the bathwater when making changes. ITQs are a valuable conservation measure, he said. And leasing quota, on either side of the equation, allows independent commercial harvesters to boost income and make fishing economically sustainable.

But new, enforceable agreements that are fair to leasers and owners of ITQ are needed, he said.

“We're looking for a way to put these in place with some legislation behind them,” Erikson said.

“What we need is some kind of way to … give these recommendations, the force of law.”

With files from Marc Fawcett-Atkinson

The oceans are dying and we

The oceans are dying and we need to STOP fishing. The supertrawlers and processors need to be stopped IMMEDIATLY and fishing phased out completely. Why are people willing to stop using plastic straws to save fish but aren't willing to stop eating fish. A Huge amount of plastic waste in the oceans is abandoned and lost fishing nets which kill millions of animals.

The only lifeline that will

The only lifeline that will work, that has been proven by ancient and current history to work - is sustainable stewardship. The current burden of humanity and its wastrel consumption of the planet's resources is clearly unsustainable,