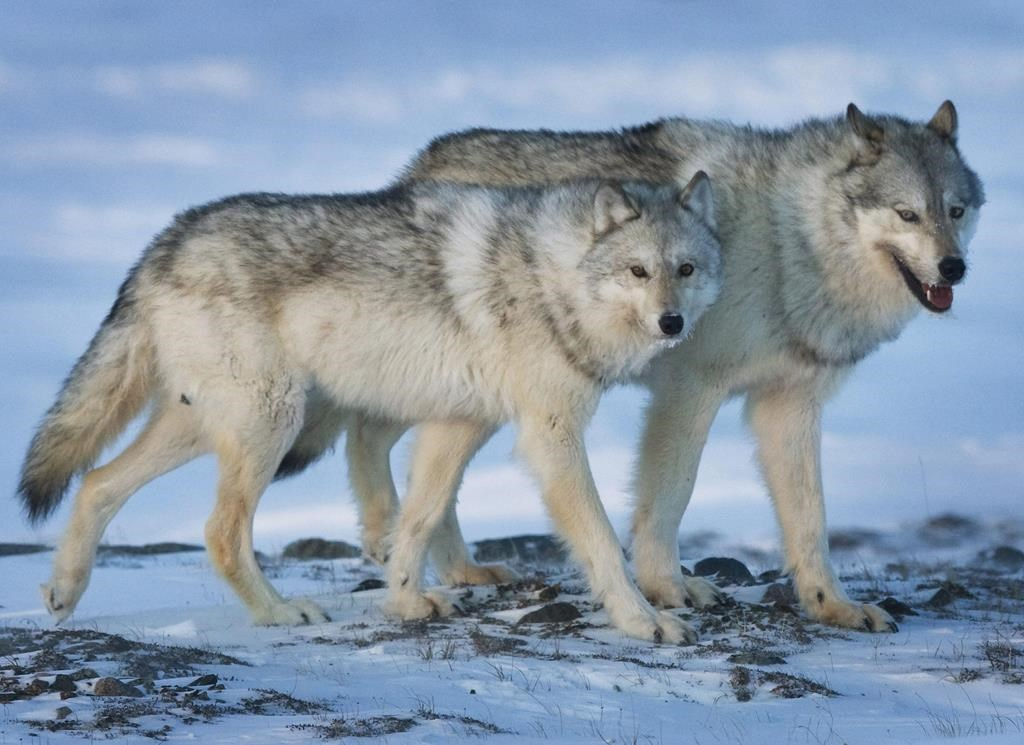 A female wolf, left, and male wolf roam the tundra near The Meadowbank Gold Mine located in the Nunavut Territory of Canada on Wednesday, March 25, 2009. File photo by The Canadian Press/Nathan Denette
Previous story
Next story

A British Columbia environmental group has launched a legal petition alleging the provincial government's wolf cull to save caribou is breaking federal and provincial laws.

Pacific Wild Alliance wants the B.C. Supreme Court to declare that the province doesn't have the authority to use a helicopter to hunt wolves under the Wildlife Act and Canadian Aviation Security Regulations.

The petition to the court, filed earlier this month, says it wants a judge to quash any permits issued for the wolf cull and to clarify the law as it applies to the killing of a vulnerable wolf population.

"It also concerns the legality of permits issued by the province for its wolf cull program," says the petition.

None of the claims have been tested in court.

A statement from the forest ministry says officials are aware of the lawsuit, but cannot comment further at this time as the matter is before the courts.

"Our government's approach to predator control is based on science and sound wildlife management principles," the statement said.

The petition says a helicopter is used to spot and track individual animals or a pack and a net gun is used to trap the wolf in order to attach a radio collar.

The collared wolf returns to its pack, revealing the location of other wolves, which are then shot using firearms from the helicopter, the petition says.

It says the case is about the government's power to allow an aircraft to be used for hunting and the legality of permits issues by the province for the cull.

A British Columbia environmental group has launched a legal petition alleging the provincial government's wolf cull to save caribou is breaking federal and provincial laws.

"The specific purpose of (the Wildlife Act) is to prohibit the use of helicopters in three circumstances: (1) transporting hunters. (2) transporting game; and (3) while on a hunting expedition," the petition says.

The document also says Canadian Aviation Security Regulations prevent a person from having a loaded firearm on an aircraft — except under limited conditions and the prohibitions — apply to a helicopter pilot and crew under contract to conduct an aerial cull.

Ian McAllister, executive director of Pacific Wild Alliance, said in a statement Wednesday that the organization is "fully prepared" to challenge the B.C. government in court.

"Hundreds of wolves are being killed each year in the most horrific fashion, at taxpayer expense," he said.

"It's disheartening to learn that on top of our legal counsel finding grounds to prove this program is likely unlawful under B.C. law, there's also now confirmation from a renowned academic publication that culling is having no positive impact for caribou recovery."

A recent study by Raincoast Conservation Foundation and the universities of Alberta, British Columbia, and Victoria said the wolf kill in Western Canada has had "no detectable effect'' on reversing the decline of endangered caribou populations.

The study was published in the international journal Biodiversity and Conservation.

This report by The Canadian Press was first published July 22, 2020