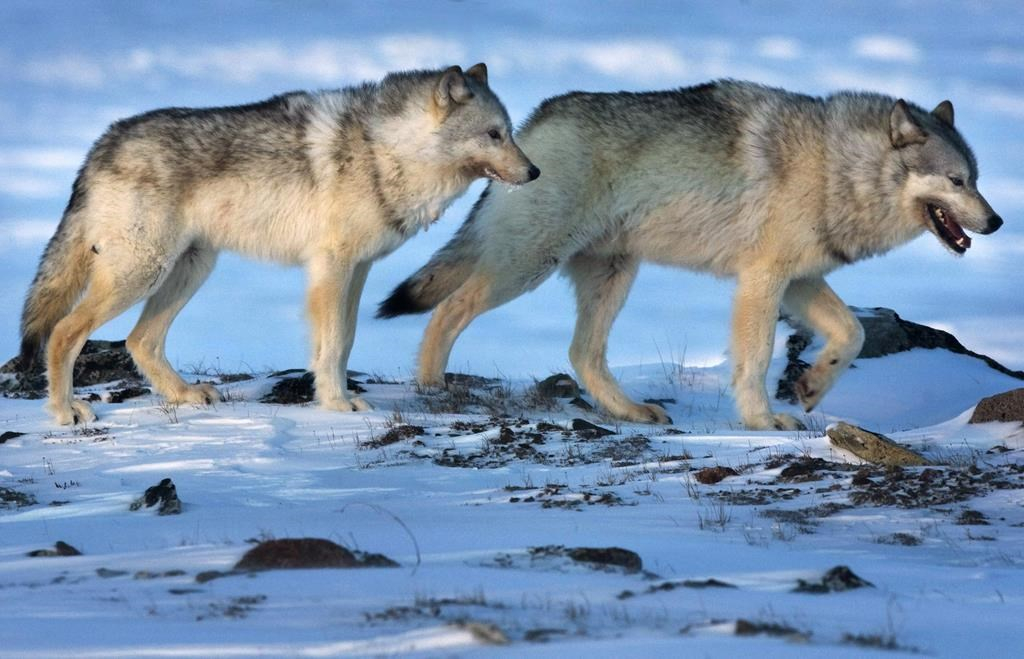 Wolves roam the tundra near the Meadowbank Gold Mine in the Nunavut on Wednesday, March 25, 2009. File photo by The Canadian Press/Nathan Denette
Previous story
Next story

A government-sponsored wolf kill in Western Canada has had "no detectable effect" on reversing the decline of endangered caribou populations, a study says.

Scientists from Raincoast Conservation Foundation and the universities of Alberta, British Columbia, and Victoria found statistical flaws in an influential 2019 report supporting a wolf cull.

The new research published in the international journal Biodiversity and Conservation found that addressing potential threats from wolves did not slow the loss of mountain caribou in British Columbia and Alberta.

Instead, it says factors affecting population decline include loss of habitat to logging, snowpack variation and snowmobiling.

Wolves and caribou have co-existed, interacting predators and prey, for millennia in western North America, said Chris Darimont, co-author on the study.

But this balance began to tip around the middle of the 20th century when industrial clear-cut logging and oil and gas development took off, said Darimont, who is also a professor at the University of Victoria and science director for Raincoast Conservation Foundation.

The cleared land and roads made wolves more efficient predators where they travelled large distances to search for vulnerable prey, he said.

"Despite not preferring caribou, many on average killed more caribou simply because there are more wolves," he said.

Another factor affecting caribou population is the availability of lichen in old growth forests, which were cut for timber, Darimont said.

"There is less food to eat," he said.

A government-sponsored wolf kill in Western Canada has had "no detectable effect" on reversing the decline of endangered caribou populations, a study says.

"Industry has fundamentally changed these ecological landscapes and relationships between predator and prey — the road systems, the apparent competition and then the decline in food supply for the caribou themselves."

The logic behind wolf culls has been "somewhat seductive and compelling," Darimont said.

If you take away most or all of the wolves, the caribou should do better, but data does not support that logic, he added.

The researchers found that culling wolves or putting pregnant caribou behind pens was no more effective than doing nothing, he said.

It is likely that the caribou population in some of those areas where wolf culls had taken place would have bounded back without that measure, he said.

The effects of the flawed 2019 study have had profound implications because the B.C. government relied on it to expand its wolf cull program, killing 463 wolves over the winter of 2019/20, the study says.

The authors pointed to one type of caribou found across Wells Gray Park and into B.C.'s Kootenay region that suffered the steepest population losses despite having few animals killed by wolves.

"Caribou responses could be better explained by random chance than by any treatment applied to those populations," Darimont said.

While wolf populations are known to rebound, they are important to the environment and have a "disproportionately large effect on the ecosystem," he said.

"They deliver many values and processes to the environment they inhabit, and many of which end up benefiting human beings, so they have incredibly important effects in ecosystems."

As for some of the caribou herds, Darimont said they have no solutions.

"It's really hard to turn that ship around. Where the landscapes have been so fundamentally disturbed and each year that has been put off has made conditions deteriorate further and further to a point at which some populations will clearly never rebound, they will blink out."

This report by The Canadian Press was first published July 14, 2020

Cities need a rescue plan. $10B proposed by the Federation of Cdn Municipalities is a good start.

Good article. Links to the

Good article. Links to the two reports referenced would be useful.

Thank you for this article. I have been watching this issue since the 90's and it is so frustrating. It seems that people and our elected leaders would rather kill wolves than look at the true cause of caribou decline-habitat destruction and the roads that come with it. Here in BC, even though the Federal Minister of Environment has issued an announcement that caribou are under "imminent threat," mandating BC to do something concrete about the decline, for the most part it's business as usual. Logging and oil and gas development continue in key habitat areas. If any caribou survive, it will be in spite of us, not because of us.