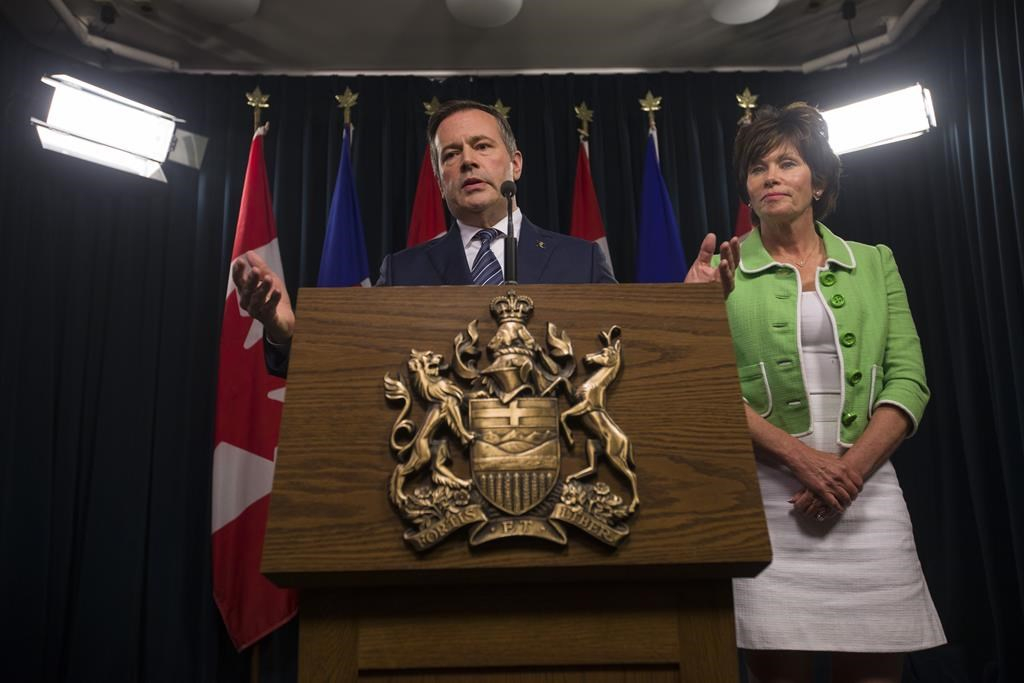 Alberta Premier Jason Kenney and Minister of Energy Sonya Savage respond to the federal approval of the Trans Mountain Pipeline in Edmonton, on Tuesday, June 18, 2019. File photo by The Canadian Press/Amber Bracken
Previous story
Next story

An environmental law group wants a court to suspend the Alberta government's inquiry into oil and gas industry critics until there's a decision on whether it's legal.

In June 2019, It appointed forensic accountant Steve Allan to head a public inquiry.

Ecojustice filed a lawsuit last November that alleged the inquiry is politically motivated, biased and outside provincial jurisdiction.

A hearing that had been scheduled for April was delayed indefinitely because of the COVID-19 pandemic.

In the meantime, the group is seeking an injunction in Court of Queen's Bench that would force Allan to halt his work until there is a ruling in the lawsuit.

Allan's report was due July 2, but the government recently extended his deadline by four months and added $1 million to the inquiry's $2.5-million budget.

"They're running this process in secret. They've added another million dollars. We believe it's for a predetermined outcome," Ecojustice executive director Devon Page said in an interview Monday.

"We really were left with no choice, particularly given the court delays as a result of COVID, but to bring an injunction application."

He said the inquiry has already done harm to environmental charities by distracting them from their missions and forcing them to direct resources toward defending themselves.

An environmental law group wants a court to suspend the Alberta government's inquiry into oil and gas industry critics until there's a decision on whether it's legal.

"What they want to do is kind of tar and feather the environmental charities," Page said of the United Conservative government.

"Environmental charities in Canada make their revenue from donations, the vast majority of which come from Canadians. So if Kenney could blacken their reputations, he could harm their ability to do what they do."

Kavi Bal, a spokesman for Energy Minister Sonya Savage, said: "Ecojustice has made it clear that they oppose an inquiry into well-funded foreign campaigns that seek to discredit Alberta and its energy sector."

The Alberta government is "committed to protecting Canada’s largest economic subsector from attack by foreign opposition, and we will see this inquiry through to it’s completion," he added.

Page said despite pandemic-related delays in the courts, he's hopeful the injunction request will be considered "in a matter of weeks."

This report by The Canadian Press was first published July 27, 2020

Maybe Kenney and the UCP

Maybe Kenney and the UCP could get that war room fired up and find out who has been spending all that money suppressing climate science. Kind of like how Big Tobacco tried to con us all into thinking tobacco smoke didn’t harm people.