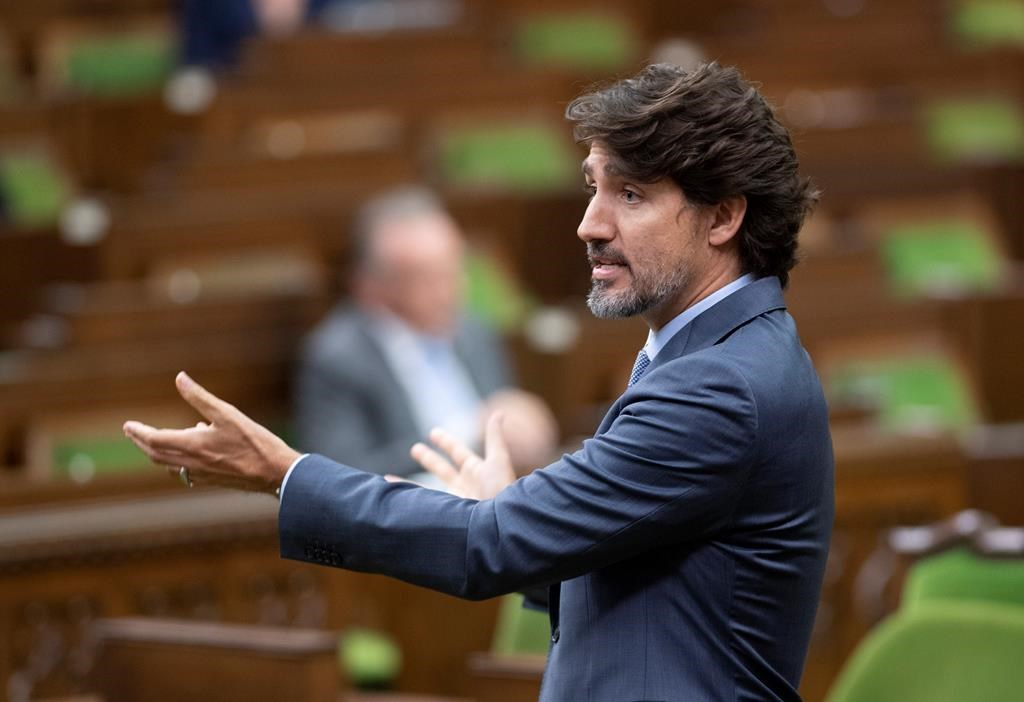 Prime Minister Justin Trudeau rises to respond to questions from the opposition during a sitting of the Special Committee on the COVID-19 Pandemic in the House of Commons on Wednesday, July 22, 2020 in Ottawa. File photo by The Canadian Press/Adrian Wyld
Previous story
Next story

Dion was already investigating Morneau and Prime Minister Justin Trudeau for possible violations of the Conflict of Interest Act for not recusing themselves during cabinet discussions about an agreement to have WE Charity run a federal volunteering program for students who couldn't find work in the COVID-19 pandemic.

Both have apologized for not doing so.

Morneau's problems grew bigger Wednesday over his repayment of $41,000 in WE-sponsored travel expenses for family trips three years ago, with Dion telling the opposition parties he would look into that potential ethics violation.

Rules prohibit ministers or their families from accepting free travel, lest it be seen as buying influence in government policy.

In letters released by NDP ethics critic Charlie Angus and Conservative critic Michael Barrett, responding to their complaints, the commissioner wrote he will look into whether Morneau ran afoul of that rule and a separate one for "failing to disclose these gifts" that could lead to a fine, albeit not a large one.

For Trudeau, the issues stem from speaking fees and related expense reimbursements the WE organization paid to his mother, brother, and wife, amounting to over $500,000 based on testimony the charity's co-founders provided to the House of Commons finance committee Tuesday.

During an afternoon news conference Wednesday, Conservatives said the new numbers related to the travel expenses also demand an additional investigation by Dion to see if the payments violate conflict-of-interest rules.

Dion rejected a call from the Tories to look into whether Morneau has failed to publicly declare previous recusals from cabinet decisions, saying they offered him no reasonable grounds to believe that had happened.

It all landed on the eve of Trudeau's own appearance at the Commons finance committee about the events that led to his cabinet to ask WE Charity to oversee a program that provides grants to students and graduates for volunteering if they couldn't find work this summer due to the pandemic-related economic slowdown.

His chief of staff, Katie Telford, is also to appear.

The two were originally scheduled to appear separately for one hour each, but opposition MPs on the finance committee voted Wednesday evening to have Trudeau appear for at least three hours and Telford for at least two — each of them alone.

The partisan barbs and rhetoric on display Wednesday set the stage for a potentially contentious and rare prime ministerial appearance.

"We want the truth, the whole truth, and nothing but the truth," Conservative finance critic Pierre Poilievre said in Ottawa.

He warned the Opposition would look to pry more testimony out of Trudeau this fall if he didn't provide detailed answers.

NDP Leader Jagmeet Singh said he wanted Trudeau to explain why the Liberals opted to have the charity run a service program when there were other, potentially easier, avenues to help financially strapped students.

"This was never about helping students," Singh said Wednesday in Burnaby, B.C.

"This was about helping close friends of the Liberal government and of Prime Minister Trudeau and that is deeply troubling."

The Liberals budgeted $912 million for the student-volunteer program, but only agreed to pay a maximum of $543 million to WE. That included about $43.5 million in administration fees to the group, with the remainder to be spent on the grants.

The program is to pay eligible students and graduates $1,000 for every 100 hours of volunteering, up to a maximum of $5,000. The government has yet to roll it out nearly a month after WE backed out over the controversy.

On Tuesday, WE co-founders Craig and Marc Kielburger told the finance committee they expected the program to cost up to $300 million because the majority would earn between $1,000 and $3,000, with few hitting the maximum amount.

They also spoke about the expenses paid to Trudeau's family members, and the $41,000 in travel expenses for Morneau and his family, which the finance minister paid back last week.

Their message to the committee was that it was their history as an organization that earned them the deal, not any political ties. Similarly, the Liberals say they acted on the advice of the non-partisan public service.

The ethics committee is meeting separately to look into the conflict-of-interest safeguards around government spending decisions.

While its members have asked Trudeau to testify there, a Conservative proposal to have cabinet ministers declare whether any of their relatives have ties to WE failed to land the necessary votes.

The Conservatives' Barrett argued opposing the motion amounted to "complicity in a cover-up," prompting Liberal MP Greg Fergus to argue the committee shouldn't be used for a political witch hunt where MPs investigate each other.

Angus, the New Democrat on the committee, cautioned against forging ahead with any probe against MPs or ministers absent a specific reason: "Fishing expeditions, I believe, are beyond the purview of the committee."