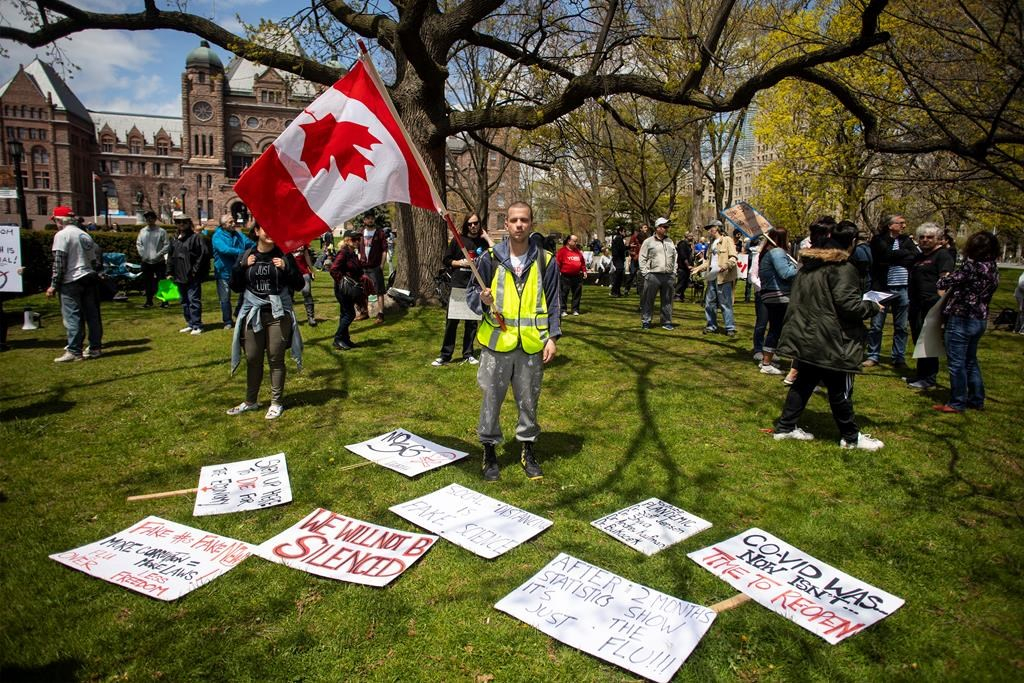 Protesters gather outside the Ontario Legislature in Toronto, as they demonstrate against numerous issues relating to the COVID-19 pandemic on on Saturday, May 16, 2020. File photo by The Canadian Press/Chris Young
Previous story
Next story

A lively crowd gathered outside Francois Legault's office in downtown Montreal in mid-July to send a message to the Quebec premier: his government cannot force them to wear masks in indoor public spaces to fight the spread of COVID-19.

"Long live freedom without a mask," read one sign at the rally, which drew several dozen people. "My body, my choice" read another, alongside a drawing of a medical mask with a line across it.

The anti-mask movement is not unique to Quebec, nor are masks the only source of conflict in the country when it comes to public health directives around the novel coronavirus. But the issue is one of several at the heart of a growing online movement of disinformation around the COVID-19 pandemic in Canada.

Researchers say conspiracy theories about COVID-19 are spreading at an alarming rate across the country — and they warn misinformation shared online may lead to devastating consequences and push Canadians to shun important safety measures.

"I think that people should be enormously concerned," said Aengus Bridgman, a PhD candidate in political science at McGill University and co-author of a study published last month on COVID-19 misinformation and its impact on public health.

The study found the more a person relies on social media to learn about COVID-19, the more likely they are to be exposed to misinformation and to believe it, and to disregard physical distancing and other public health guidelines. About 16 per cent of Canadians use social media as their primary source of information on the virus, Bridgman said in a recent interview.

For example, a Facebook group called "Against mandatory mask-wearing in Quebec" has over 22,000 members to date, while another group with a similar mission has nearly 21,000 members.

The posts on these pages vary, from questioning the science behind wearing masks and lambasting Horacio Arruda, Quebec's public health director, for the mandatory mask rule, to accusing the World Health Organization of bias and Microsoft founder and philanthropist Bill Gates of creating the virus.

Another study published in May at Carleton University indicated 46 per cent of Canadians believed at least one of four unfounded COVID-19 theories: the virus was engineered in a Chinese lab; the virus is being spread to cover up the effects of 5G wireless technology; drugs such as hydroxychloroquine can cure COVID-19 patients; or rinsing your nose with a saline solution can protect you from infection.

A lively crowd gathered outside Francois Legault's office in downtown Montreal in mid-July to send a message to the Quebec premier: his government cannot force them to wear masks in indoor public spaces to fight the spread of COVID-19.

Bridgman said the speed at which these conspiracy theories circulate online makes it difficult to verify where they originate. And while some right-wing groups in Canada are pushing these falsehoods, Bridgman said people across the political spectrum are vulnerable to them.

"This is a Canadian challenge," he explained. "People across levels of education, across age groupings, across political ideas, all are susceptible to misinformation online. This is not a phenomenon that is unique to a particular community."

Protests have taken place across Canada since the provinces put COVID-19 lockdown measures in place earlier this year, from Vancouver, to Toronto and Quebec City, where hundreds rallied at the provincial legislature July 26 against mandatory mask-wearing.

Alexandre Barriere was among dozens of protesters denouncing the mask rule on July 19 outside Legault's Montreal office.

He compared mask-wearing to a dog muzzle and said he didn't believe the COVID-19 pandemic exists. "We live to be free. We're not in the world to be controlled like animals," the 29-year-old said in an interview.

Another protester, 65-year-old Antonio Pietroniro, said the pandemic was "bogus" and warned that, after making masks mandatory, the government would force people to get vaccinated against the virus.

"They're going to say you have to take the vaccine even though it hasn't been proven to be safe," he said, echoing the anti-vaccination movement that has gained prominence in Canada, the U.S. and other countries in recent years.

Alison Meek, a history professor at Western University, said there are similarities between COVID-19 conspiracy theories and the anti-vaccination movement. Misinformation intentionally spread about COVID-19, she added, is also comparable to the conspiracy theories that circulated in the 80s and 90s during the HIV/AIDS epidemic.

"When you're scared, when you're frustrated, you want someone easy to blame... We want to point to somebody and say, 'Aha! You're the one — there's a bad guy here that did it,' as opposed to, 'this is just how these pandemics actually work,'" Meek said in an interview.

Governments have had to adapt their public health directives to keep up with rapidly evolving science about the virus.

Public uncertainty around the scientific process, combined with mounting frustrations with lockdown measures and a struggling economy has created a perfect storm in which conspiracy theories can flourish, Meek said.

"All of those things are coming together right now to make these conspiracy theories a real public health crisis that's getting more and more difficult to deal with."

She said conspiracy theories need to be countered with facts and evidence, adding that people should be encouraged to think critically about where they are getting their information.

Both she and Bridgman lauded social media companies such as Twitter and Facebook for removing videos and other posts that spread misinformation about COVID-19 — but both academics also said more needs to be done.

"People are dying because of these conspiracy theories and we've got to stop them," Meek said. "We've got to somehow figure out how to challenge them."

This report by The Canadian Press was first published August 3, 2020.

Here's what conspiracy theorists really don't want you to know.

Conspiracy theories flourishing along with COVID-19