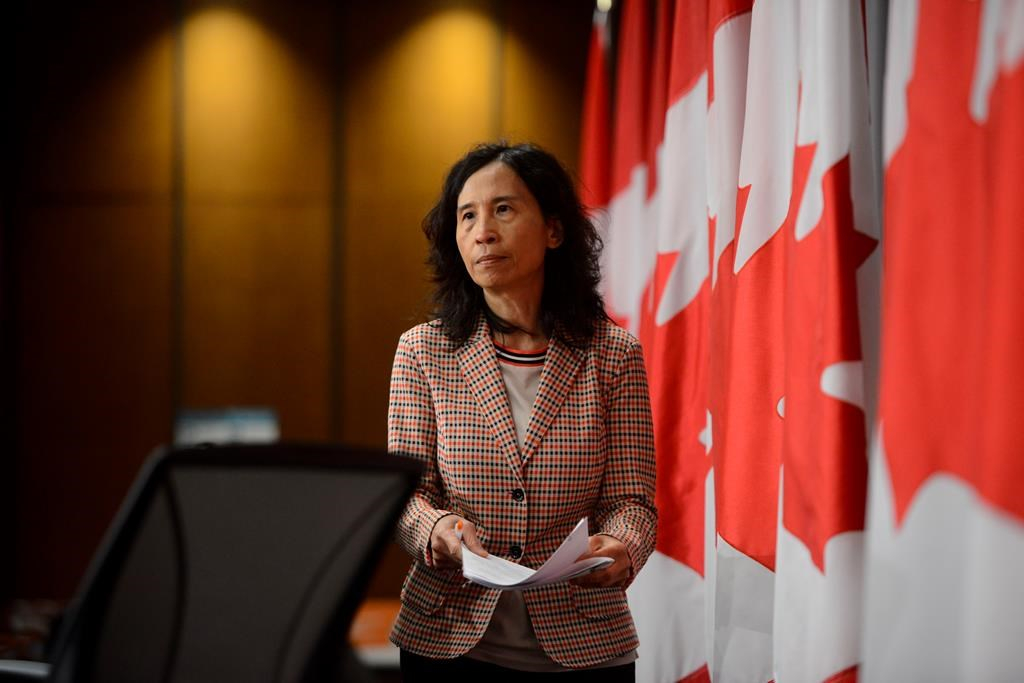 Canada's top public health doctors warned Tuesday that vaccines in development for COVID-19 provide hope but will not mean an immediate end to the pandemic.

Dr. Theresa Tam said the Public Health Agency of Canada is planning to be responding to the pandemic for at least a year and more likely two or three.

"I would say that a vaccine is a very important aspect of the response going forward but we can't, at this stage, put all of our focus in the hopes this is the silver-bullet solution," Tam said at a national briefing on the COVID-19 situation in Canada.

"It is a very important solution if we get a safe and effective vaccine but I would say the public health measures that we have in place, the personal daily measures that we take, is going to have to continue."

There are more than two dozen vaccines for COVID-19 in clinical trials around the world, and in the best-case scenario, one or two might be approved for widespread use by the end of the year. But approval is only a step in the process, and it will take time to then produce, distribute and administer billions of doses of vaccine around the world.

Dr. Srinivas Murthy, a critical-care specialist and pandemic researcher at the University of British Columbia, says the world has never attempted a vaccine program at this speed or scale before.

"We have no idea how this is going to work," he said.

He said once a vaccine is approved, then the questions become who gets it first, will people feel comfortable taking it, and how do you get it into them.

Volker Gerdts, CEO of the Vaccine and Infectious Disease Organization at the University of Saskatchewan, said he wants Canadians to know that even as the timeline for developing vaccines is accelerated, speed is not coming at the expense of safety. He said Health Canada will not approve a vaccine that is not safe or that cut safety corners to get through faster.

In 2009, when the H1N1 flu virus was declared a pandemic, there was a wide-scale vaccination effort but that illness did not have the same impact as COVID-19, and the development of the vaccine was different because flu vaccines are developed every year.

Canada's top public health doctors warned on Tuesday, August 4, 2020, that vaccines in development for COVID-19 provide hope but will not mean an immediate end to the pandemic.

Murthy said the world knew it should have a specific coronavirus vaccine because a pandemic like this was predicted, but nobody ever got as far as making one, so the research was starting much further behind where H1N1 was when a pandemic was declared. COVID-19 is also wider-spread and more lethal than H1N1 was.

"The whole world wants this one at the exact same time and that is something that is going to require unprecedented amounts of co-ordination and collaboration across the world," Murthy said.

The World Health Organization says vaccines must be effective in at least 50 per cent of the population for any chance of approval, and closer to 70 per cent is better. Once a vaccine developer declares a vaccine is both safe and effective, nations can begin the work to approve its use on their citizens.

Here that falls to Health Canada, which is already working with the provinces, through the National Advisory Committee on Immunization, to determine how approval, manufacture and distribution will work. The committee is expected to announce before the end of the summer which segments of the population will be prioritized for getting the vaccine.

During the H1N1 pandemic, which was found to affect children more and seniors less, priority groups included the very young, health workers, remote communities and people with chronic illnesses under the age of 65. This time the expectation is that older Canadians and front-line workers may be among the priority groups.

Statistics Canada reported that about two in five Canadians were vaccinated in the first six months the H1N1 vaccine was available. Supply of a COVID-19 vaccine may be more difficult, with such high demand. Canada is also, at the moment, limited in its ability to produce a vaccine at home and may rely on international manufacturers to help.

University of British Columbia pediatric infectious disease specialist Dr. Manish Sadarangani said people should see the goal as "controlling" the pandemic rather than "ending" it. He said realistically, a vaccine will only slow the spread of the novel coronavirus at first: it often takes years, if not decades, to eradicate a virus entirely.

Measles, mumps and polio all have vaccines, he notes, but they still exist and spread, often because of a lack of vaccinations.

However, he added, we don't have to vaccinate everyone to control transmission because reducing the number of people who can get or spread the virus will cut down on the infection rate.