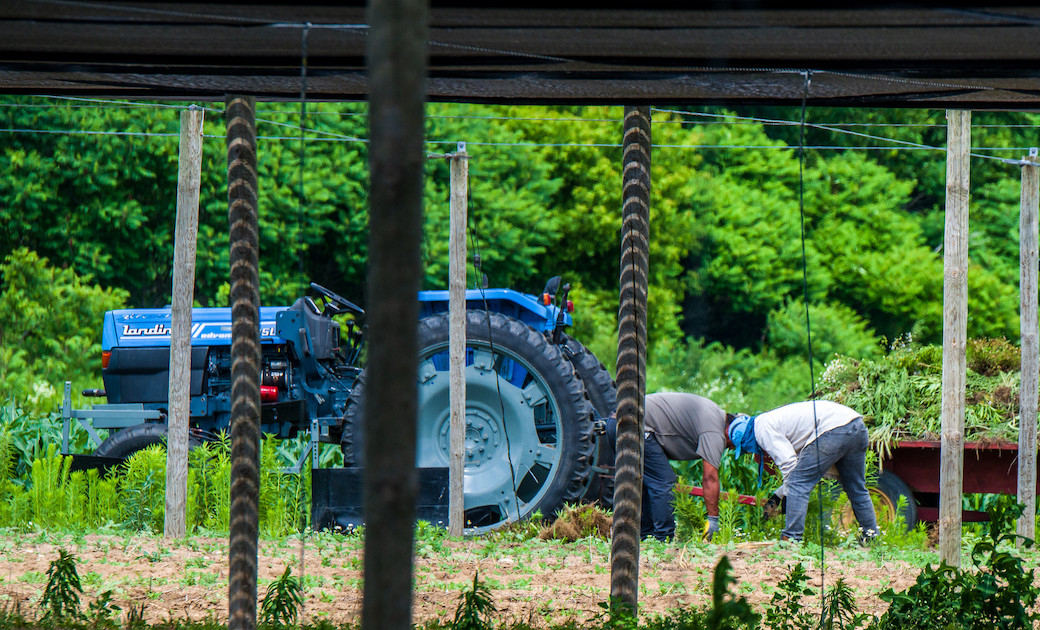 These personal pharmacies reflect workers’ concerns they won’t have access to adequate health care in the province, despite working in one of B.C.’s most dangerous — and essential — industries. It’s a situation advocates say puts farm workers at risk despite government assurances the system is working.

“They bring everything because they know the first three months, it’s going to be hard to access health care,” said Byron Cruz, who advocates for migrant workers’ rights with the Vancouver-based organization Sanctuary Health. “It’s crazy.”

About 50,000 to 60,000 temporary foreign workers come to Canada each year to work on farms, in food processing, and in the fisheries.

Close to 18 per cent of those working on farms come to B.C., where they’re essential to an industry that supplies about half the province’s food. All are eligible to sign up for provincial health insurance, or MSP, after a three-month waiting period.

That waiting period was temporarily waived on March 1 due to the pandemic; workers arriving in the province with visas for six months or more could receive B.C. health care upon arrival. It was a change recommended in a 2015 report by the Canadian Center for Policy Alternatives on the gaps migrant farm workers face accessing health care, and one Cruz and other advocates had been calling for for years.

Despite their opposition, the three-month wait was reinstated July 31, the Ministry of Health said in a statement.

Meanwhile, the Seasonal Agricultural Worker Program (SAWP) is based on bilateral agreements between Canada, Mexico and 11 Caribbean countries and lets Canadian companies hire workers for up to eight months. Most migrant farm workers are Mexican, come to B.C. through this program, and have their whereabouts tracked by the Mexican government. They almost exclusively are covered by private insurance co-ordinated by the Mexican government, which exceeds the provincial standards, explained Hugo Velázquez, a consular official with the Mexican Consulate in Vancouver.

In 2019, 46,707 workers came to Canada through the Seasonal Agricultural Worker Program; 73 per cent of them were from Mexico.

Both programs require that employers offer their migrant workers health insurance, either through the provincial government or a private insurer. That choice is made by the employer, and most opt for private insurance, Employment and Social Development Canada, the agency responsible for managing the programs, said in an email.

Every summer, thousands of migrant farm workers flock to B.C. bearing painkillers and antibiotics. These personal pharmacies reflect workers’ concerns they won’t have access to adequate healthcare in the province.

On the surface, it’s a fail-proof system that ensures migrant farm workers can access health care when they’re in Canada. But reality is more complex, said Cruz, the migrant farm-worker advocate.

A 2015 report by the Canadian Centre for Policy Alternatives found that only eight per cent of migrant farm workers eligible for provincial health insurance had been signed up for the program by their employer. That leaves them exposed to issues associated with using private insurance in a public health-care system, he said.

Some clinics refuse to charge the private insurance company directly, forcing workers to pay for treatment and claim reimbursement later.

“It is not uncommon for a single consult to cost $100, and lab bills to be in the several hundred dollar range. This is a large financial barrier,” Amy Cohen, a volunteer with the advocacy group Radical Action with Migrants in Agriculture Okanagan and a professor of anthropology at Okanagan College, wrote in an email.

“Reimbursement is slow, and by mail so often once a reimbursement cheque arrives, it is months later or the worker is back in Mexico or the Caribbean.”

Cruz also cited cases of migrant workers avoiding treatment because of language barriers, fears they might lose income, and out of concern for retribution from employers.

The 2015 report echoed Cruz’s concerns, noting that 69 per cent of workers avoided reporting health concerns when they were injured or ill for fear of losing hours or impacting future employment prospects.

“Farmworker advocates stated that a common employer response to illness and injury among migrants was firing the individual and arranging his/her deportation,” the report notes.

Many will try to avoid treatment altogether, relying on their personal pharmacies instead.

Still, Velázquez, the official at the Mexican Consulate, said some of the problems described by Cruz — migrant workers paying for care upfront, for instance — are, for Mexican workers in the country through the Seasonal Agricultural Worker Program, primarily due to bad communication.

“We all realized three years ago that not everybody knew the whole aspects of the (private health insurance) program,” he said.

That pushed the consulate to facilitate communication between migrant workers, employers, private insurance providers, clinics and hospitals, and advocates like Cruz. It’s an approach Velázquez said has been successful. Cruz also acknowledged the situation has slightly improved recently.

Still, Velázquez can only help Mexicans arriving through the Seasonal Agricultural Worker Program. Other migrant farm workers coming through the Temporary Foreign Worker program or from other countries — many Guatemalans and Filipinos also work in B.C.'s fields — are in a trickier position, Cruz said.

“The debate around ‘sustainable agriculture’... has not focused enough, if at all, on the issue of sustainable and safe employment for agricultural workers,” the 2015 report by the Canadian Centre for Policy Alternatives noted. “A food system that depends on precarious workers cannot be viewed as sustainable.”

It’s a perspective echoed by Cruz and other advocates for migrant farm workers. And eliminating the three-month waiting period to receive provincial health care was a step in the right direction they would like to see maintained. That would help eliminate the financial barriers facing migrant workers who seek medical care with private insurance, and fill the gaps left by the private insurance provider.

“Ultimately, we have deemed these workers essential,” concluded Cohen in an email. “They deserve to be covered by provincial health-care coverage from the moment they arrive in Canada.”

On July 31, the Prime Minister of Canada unveiled nearly $59 million in support for migrant workers based on Canadian farms, with money going to more inspections, emergency relief and improved living conditions for those workers. The federal government also is working on improving the oft-maligned Temporary Foreign Workers program. “This includes measures like developing mandatory requirements and better living conditions for workers,” Trudeau said. https://biv.com/article/2020/07/trudeau-pledges-transition-cerb-recipien...

“Ultimately, we have deemed

“Ultimately, we have deemed these workers essential,” concluded Cohen in an email. “They deserve to be covered by provincial health-care coverage from the moment they arrive in Canada.”

It is beyond shameful the above statement even has to be uttered.