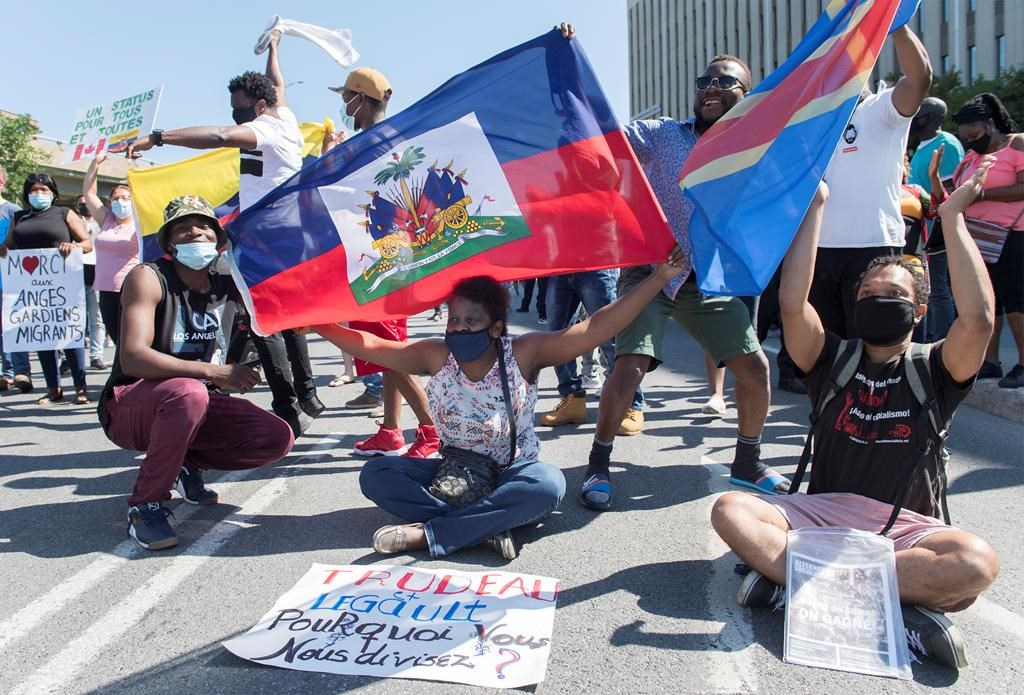 People take part in a protest outside Prime Minister Justin Trudeau's constituency office in Montreal, on Aug. 15, 2020, where they called on the government to give residency status to all migrant workers and asylum seekers. Photo by The Canadian Press
Previous story
Next story

The asylum seeker from Ivory Coast works as a security guard in hospitals and long-term care homes in the Montreal area, where he watched many of his colleagues stop coming in as deaths linked to COVID-19 began to mount this spring.

But while Nguessan Bi kept working, he said he found out Friday that he would be excluded from a new government program to fast-track the permanent residency applications of some asylum seekers working on the front lines during the pandemic.

"Why (not) us? We who gave our hearts and our love... Why are we abandoned?" he said in an interview at a protest camp across the street from Prime Minister Justin Trudeau's Montreal riding office Saturday. "What did we do to deserve this?"

Ottawa announced Friday that asylum seekers working in specific jobs in the health-care sector would be eligible for permanent residency without first having to wait for their asylum claims to be accepted, as is typically the process.

Immigration Minister Marco Mendicino said the move came in response to public demand for so-called "Guardian Angels" — many in Quebec — to be recognized for their work.

"They demonstrated a uniquely Canadian quality in that they were looking out for others and so that is why is today is so special," Mendicino said in an interview Friday afternoon.

But asylum seekers and their supporters say Ottawa's plan excludes thousands of workers without permanent status in Canada who have laboured on the front lines during the pandemic, often at great personal risk to themselves and their families.

That includes security guards and janitorial staff, factory workers, and farm labourers, among others.

"I have friends who worked with me in security that abandoned (their posts) because they were afraid of getting infected. But I stayed," said Nguessan Bi.

He said he wants Trudeau and Quebec Premier Francois Legault to do something to help asylum seekers who are not eligible for the new program.

Several dozen people rallied in front of Trudeau's office on Saturday to demand permanent residency for all asylum seekers.

"It's an act of recognition. They deserve status," Joseph Clormeus, a member of Debout pour la dignite, a Montreal advocacy group that organized the rally, told the crowd.

Anite Presume, a Haitian asylum seeker who came to Quebec in August 2017 from the United States, was among the protesters.

She works in a medication factory, and said she kept working during the pandemic despite the risks.

"To take the bus, we were all stressed, but we still went to work because it was essential. They needed medication for the hospitals," she said in an interview.

She said she has not received a response yet to her application for asylum in Canada, and lives under a cloud of uncertainty and stress about her future.

"It's a feeling of rejection," Presume said, about not being included in Ottawa's regularization program. "They rejected us as if we did nothing."

To apply for residency under the new program, applicants must have claimed asylum in Canada prior to March 13 and have spent no less than 120 hours working as an orderly, nurse or another designated occupation between the date of their claim and Aug. 14.

They must also demonstrate they have six months of experience in the profession before they can receive permanent residency and have until the end of August 2021 to meet that requirement.

The program was the result of negotiations between the federal government and Quebec, who have had a strained relationship on the question of immigration, and in particular the asylum claimants, in recent years.

Public support has been building for asylum seekers' demand for permanent residency after it was revealed that refugee claimants were among those toiling in Quebec's long-term care facilities, which were hard-hit by COVID-19.

This report by The Canadian Press was first published Aug. 15, 2020.

— With files from Stephanie Levitz in Ottawa

Thousands of lives on hold as immigration system stalled out