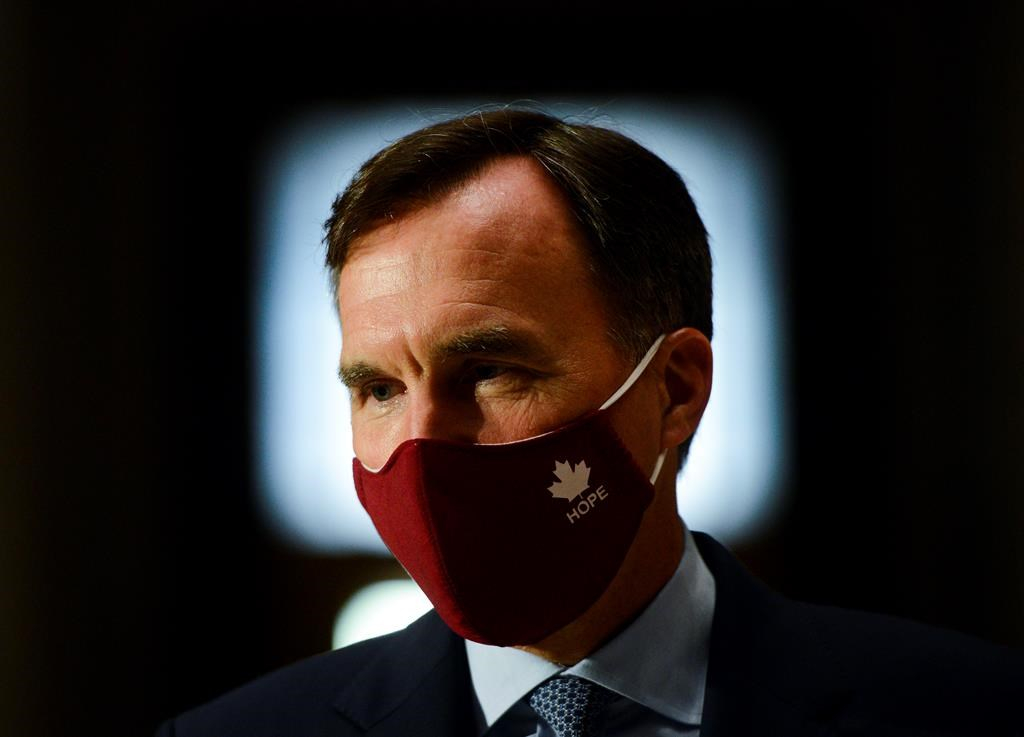 Federal Finance Minister Bill Morneau resigned his cabinet position and his seat in Parliament Monday evening as rumours swirled about tension between him and the prime minister amid the WE scandal.

Morneau, who had been the only finance minister in Prime Minister Justin Trudeau's cabinet since the prime minister was elected in 2015, made the announcement at a hastily called press conference Monday evening. His resignation comes as Canada faces ongoing threats from COVID-19, which has caused an economic downturn worse than the Great Depression.

“I had been thinking about this for a period of time,” Morneau said.

Morneau said he handed in his resignation Monday morning. He said Trudeau had not asked for him to leave, but that “we both recognized the necessary vigorous debate that comes between a finance minister and a prime minister.”

Last week, the Globe and Mail reported that Trudeau wasn’t committed to keeping Morneau as finance minister as the two were clashing over the government’s response to the economic fallout of COVID-19.

At the time, Trudeau said he had “full confidence” in Morneau, and Morneau said he had no intention of leaving politics. Meanwhile, Trudeau had begun tapping former Bank of Canada governor Mark Carney as an “informal adviser” on economic matters, Bloomberg reported.

Trudeau and Morneau had also clashed in recent days over the size and scope of environmental measures in the government’s economic recovery plans, and the country’s soaring deficit, Reuters reported Sunday.

Opposition Conservative Party Leader Andrew Scheer said the move is “proof of a government in chaos.”

“At a time when Canadians are worried about their health and their finances, Justin Trudeau’s government is so consumed by scandal that Trudeau has amputated his right hand to try and save himself,” Scheer said via Twitter.

Bill Morneau’s “resignation” is further proof of a government in chaos.

At a time when Canadians are worried about their health and their finances , Justin Trudeau’s government is so consumed by scandal that Trudeau has amputated his right hand to try and save himself. 1/3

Morneau said Monday that he intends to put his name forward as a candidate for secretary-general of the Organization for Economic Co-operation and Development (OECD), an international economic organization. In a statement, Trudeau thanked Morneau for his “leadership, advice and close friendship.”

Rumours have swirled about tension between Morneau and Prime Minister Justin Trudeau after the WE scandal. His resignation comes as Canada faces ongoing threats from COVID-19, which has caused an economic downturn worse than the Great Depression.

The Prime Minister's Office did not hint at who might be Morneau's successor, though there has been plenty of speculation, including Deputy Prime Minister Chrystia Freeland, as well as Mark Carney.

"I'm confident (Trudeau will) have a positive choice in that regard," Morneau said, referring to his successor.

Morneau also said he did not intend to run for office again during the next election.

"We need a finance minister that's going to be there for the long term," he added, referring to the long economic recovery Canada now faces.

The resignation also comes as the Liberal government is still reeling from the WE scandal; the Conservatives had been calling for Morneau to resign because of his perceived conflict of interest.

Morneau has been under significant pressure since he revealed last month that he had repaid WE Charity for $41,000 in travel-related expenses. The federal ethics commissioner is investigating whether Morneau and Trudeau — who both have close ties to the charity — broke ethics rules when awarding WE a federal contract.

One of Morneau’s daughters works for the organization, and several of Trudeau’s family members had taken money from WE for speaking fees or travel. Both have apologized for not recusing themselves.

“I wish that, in hindsight, that we had done things differently around the WE Charity,” Morneau said Monday.

NDP Leader Jagmeet Singh accused Trudeau of forcing “someone else to take the heat.”

Canadians need a government that is focussed on helping them

Not on their own scandals

In the middle of a financial crisis, Justin Trudeau has lost his Finance Minister

Every time he gets caught breaking ethics laws, he makes someone else take the heat

On Monday, Morneau also called his time in Parliament the "work of a lifetime."

This story was updated to include additional context and reaction from opposition party leaders.

I’m sorry but “His

I’m sorry but “His resignation comes as Canada faces ongoing threats from COVID-19, which has caused an economic downturn worse than the Great Depression.“ is hyperbolic to say the least. The Canadian economy is already starting to recover with even forecasted growth by the time 2020 is over.

It’s bad enough building a “news” story from tweets from the two most idiotic politicians in Canada, but to insinuate Morneau left the economy in tatters is just plain bad reporting.

"forecasted growth by the

"forecasted growth by the time 2020 is over" is a ridiculously misleading claim. There is certainly going to be nothing resembling a time "before 2020 is over" in which the economy has grown relative to the previous year. Relative to earlier in the year, sure--that happened all the time in the Great Depression, too. The economy is starting to come back a bit, I wouldn't go so far as to call what's happening "dead cat bounce", but it's pretty minor so far compared to how far and fast things plummeted earlier. The fact is that COVID-19 did genuinely create a faster and steeper drop in both GDP and employment than happened in the Great Depression, so there's no hyperbole there. We hope it has less lasting basis, but that depends somewhat on government policies.

Not that any of it is Morneau's fault, but I don't think the article insinuated that. As we try to move towards recovery, though, it's probably better to have Trudeau's big-spending instincts in charge than Morneau's preference for financial conservatism. I think Morneau has also been one of the more determinedly pro-fossil-fuel voices in this government, and the pro-fossil-fuel lobby has been responsible for many of Trudeau's worst policies. For those and a few other reasons, I'm glad he's gone. Plus I never liked the rich bastard.

Who cares what Andrew Scheer

Who cares what Andrew Scheer 'thinks'.

To Singh who said " Every

To Singh who said " Every time he (JT) gets caught breaking ethics laws, he makes someone else take the heat. " Um...hey Singh...the guy taking the heat also committed ethics laws. Duh.

I'm sorry but does no one

I'm sorry but does no one realize what the Bloc said previously? Morneau has to go.

Why is it every time a woman

Why is it every time a woman finally gets some major role I find myself thinking "Great! But couldn't it have been some OTHER woman?"

While I think Mr. Morneau did

While I think Mr. Morneau did a good job as Minister of Finance, he lost all credibility in the role of trusted senior Minister with his behavior vis a vis the WE fiasco. It is too bad he wasn't able to acknowledge his mistake and accept the necessity to resign for his honour and the good of the country. We still are in need of greater acceptance of the need for our senior politicians to behave constantly with high ethical standards, despite the shenanigans going on in other countries, and that includes our prime minister.

And now Chrystia Freeland is

And now Chrystia Freeland is our new Finance Minister - a new first for Canadian women =) !

The Morneau story is fascinating entertainment to this politics amateur, prompting this too-long screed.

Canada may end up pretty well out of this WE kerfuffle, now with Mark Carney as economics advisor with Trudeau's ear, strong Cabinet voices for green recovery+ in Wilkinson, McKenna & Guilbeault, and (maybe) Freeland in Finance. (I'm a perennial optimist - so sue me.... =)

Yes, IMHO the proximate cause for Morneau's resignation is his obliviousity (is that a word?) to his privilege as a rich white male with deep Bay Street ties. Slippery Trudeau only has room for one 'ethically-challenged' Liberal, and any Minister who publicly admits that he forgot a $42,000 vacation debt for 3 years is an obvious political liability. If Morneau really was the main obstacle to just, clean, green recovery & policies beyond, his absence from Cabinet is a good thing.

The question remains: will Ms. Freeland will see the value of systemic just, green clean federal spending first for COVID recovery, and thereafter for the climate & wealth inequality crises, or is she a climate-denying deficit hawk at heart? Her books shows that she is aware of deep wealth inequality & the capacity of the uber-rich for wrongheaded and even evil behaviour, but I see little evidence of a desire or strategy to fix this, nor deep concern about the climate crisis. Her economic ideology (neolib, Keynesian, MMT, Doughnut, etc.) is also unclear.

Quoting Scheer is a bit akin

Quoting Scheer is a bit akin to quoting Trump.
I don't understand why media gives either of them a platform. It's hardly as though what he says counts for anything but disinformation.
Let's not forget that his own party decided he wasn't fit to lead the opposition, let alone the country.

When a government makes a bad

When a government makes a bad decision and later recognizes it, it is necessary to get a new Minister to reverse the decision. I am hoping that this applies to the Trans Mountain pipeline, east coast drilling and other fossil-fuel projects, and that the new Minister of Finance will change course. She could start by postponing construction of TMX until a thorough economic analysis is made, and made public; I think this will show that there is no market for the diluted bitumen that will be profitable for the oil companies, and thus bring the project to an end.