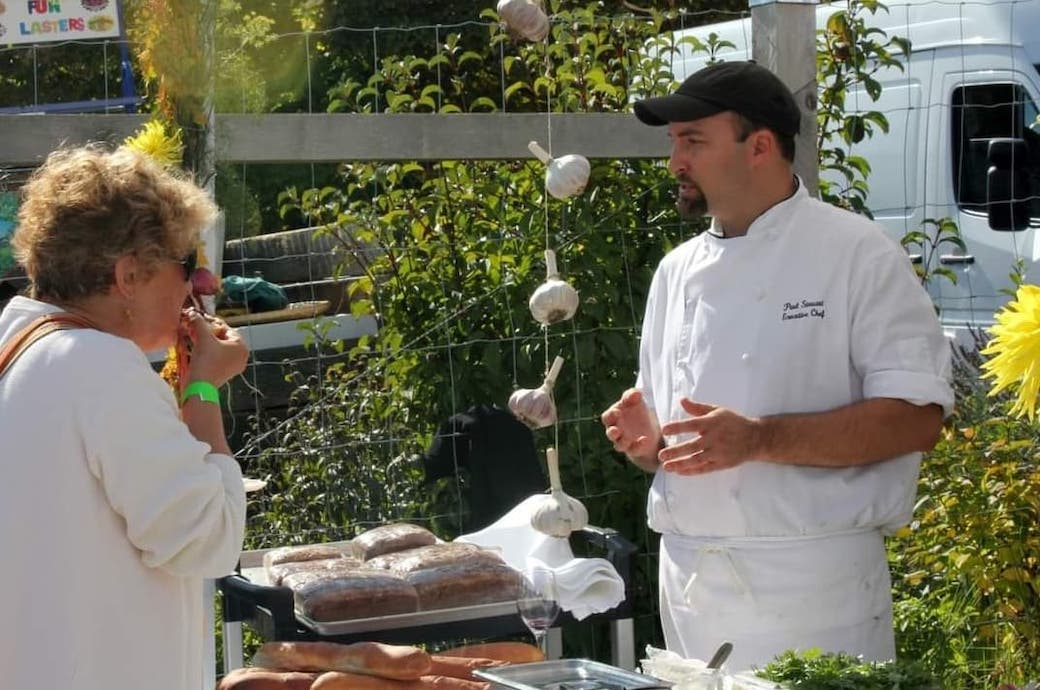 Paul Stewart, head chef at the Victoria Cool Aid Society, uses as much local produce as possible. That's not always easy — American produce has become omnipresent in B.C. since the 1990s. Photo supplied by Paul Stewart
Previous story
Next story

Paul Stewart cooks a thousand meals a day. None use California onions.

It’s a sourcing decision the head chef for Victoria’s Cool Aid Society, an organization that provides housing and meals to those in need, doesn’t regret. Onions from a processing plant and farm in the Golden State, Thompson International Inc., were recalled across Canada earlier this month because of a salmonella outbreak that has left 339 people ill, including 78 in B.C.

“We were pretty safe right from the get-go,” he said. “But if I hadn’t been buying local right now, maybe it would have been a different ballgame.”

About four per cent of the onions consumed in B.C. are grown in the province. The remainder — 99 million kilograms — are imported, primarily from the United States.

California accounted for 5.3 million kilograms, with the remainder coming mostly from farms in Washington state, one of the world’s largest onion producers.

Onions aren’t the only vegetable brought in from outside the country. According to an April report commissioned by Metro Vancouver, about 63 per cent of produce consumed in the province is imported.

That dependence makes British Columbians more vulnerable to forces beyond their control.

For instance, over the past four years, California has seen reduced production and increased prices due to drought — a situation that’s anticipated to get worse as a result of climate change.

COVID-19 has also slammed farm workers in the Western U.S., with hundreds of cases reported in Washington, Oregon and California. In Monterey Country, one of the region’s most productive agricultural hubs, farm workers accounted for nearly 36 per cent of cases.

About four per cent of the onions consumed in B.C. are grown in the province. The remainder — 99 million kilograms — are imported, primarily from the United States.

COVID-19 has been rampant among employees in the U.S. agricultural and food processing sectors. Map of COVID-19 outbreaks in the U.S. food system by Leah Douglas/The Food and Environment Reporting Network.

For Stewart, the pandemic has only increased his efforts to source locally — when he can. Cool Aid offers free meals and relies on grants and donations, meaning he doesn’t have the same flexibility as restaurants when it comes to sourcing his supplies.

And while the pandemic has made buying local easier — more funds are available and B.C. farmers have surplus crops — that money isn’t guaranteed long-term. Nor does it solve the deeper forces that are pushing U.S. produce onto British Columbians’ plates.

“An unfortunate reality is that when you buy California produce, it’s usually inexpensive because of how they subsidize it or because of the inexpensive labour they have,” he said.

Hannah Wittman, a professor of land and food systems at the University of British Columbia, agreed.

“(The U.S.) has lower environmental standards, lower labour standards and the benefit of NAFTA,” she said.

California also has the benefit of economies of scale, with massive, industrial farms that can produce year-round dominating the Central and Salinas valleys.

It’s a pattern that goes back to 1989, she explained, when Canada and the U.S. implemented the Canada–United States Free Trade Agreement (CUSFTA), the precursor to NAFTA, and continues today with the Canada-United States-Mexico Agreement that came into force last month.

The CUSFTA made it easy for American produce to be trucked into Canada and sold. Most of these sales went through one of the country’s four major grocery chains, which account for 65 per cent of Canadian retail food sales combined.

Buying produce from a few big farms lets those grocers increase the fees they charge for shelf space, pricing out the smaller Canadian farmers and processors (processors are essential to making local produce available out of season) who couldn’t compete.

“Growers are paid the market value,” said Leisa Yee, secretary-manager of the B.C. Potato and Vegetable Growers Association. “They’re price takers, they can’t sell their produce for what they want.”

Unable to access their old markets, many farmers quit — the number of Canadian farmers dropped almost 25 per cent between 1991 and 2011 — and smaller processors went out of business.

Many of those who remained started growing blueberries at an industrial scale and exporting them into the U.S.

Produce that’s grown more cheaply in the U.S. is prevalent in B.C. Meanwhile, blueberries occupy about a quarter more arable land as other field-grown crops in the province.

“You get something imported — you have no idea how it was made, where it was from, what the ingredients are in it,” she said.

Including California onions. As of Monday, more than 30 products had been affected and recalled by the Canadian Food Inspection Agency.

For Stewart, the recalls are only further encouragement to feed his clients at the Cool Aid Society more local food — even as the days get shorter.

“I’m just buying everything that’s in season, because I can process and freeze stuff and just put it away for fall and winter,” he said.

No one seems to take into

No one seems to take into account the added cost of food products produced in Canada that is not a cost to imports. About 40% of the Canadian GDP is the cost of taxation levied by all levels of Government. These taxes must be paid by Canadian workers in one form or another and therefore adds to production cost. To provide the same 40% of tax revenue to Governments, HST, Income or other tax could be reduced and added to imports. Taxpayers would be paying the same but onions and other imported food products would compete more fairly with imports. And, we would not need to sell our private sector productive assets and commons to foreigners to pay for the trade deficit.

Free trade is fundamentally a

Free trade is fundamentally a bad idea for everyone except a few of the super-rich. You see the damage across sector after sector. When they say it creates efficiency, what they mean is it ratchets down wages, as well as pollution standards, safety standards and so on.

The issue goes deeper. Because neo-liberal economics assumes nothing will ever run out, it underpins an evironment where economics punishes proactive risk management (like controlling pollution, setting safety standards, minimizing soil degradation, basically anything that might constrain current production in the name of preserving productive capacity). The issue permeates market capitalism but corporations are not the root of the problem; we need an economic framework that maximizes human welfare instead of notional profit (Donut Economics by Kate Raworth frames such a system nicely).