Most solar manufacturers claim their panels will last for about 25 years. That means the solar e-waste glut is coming. 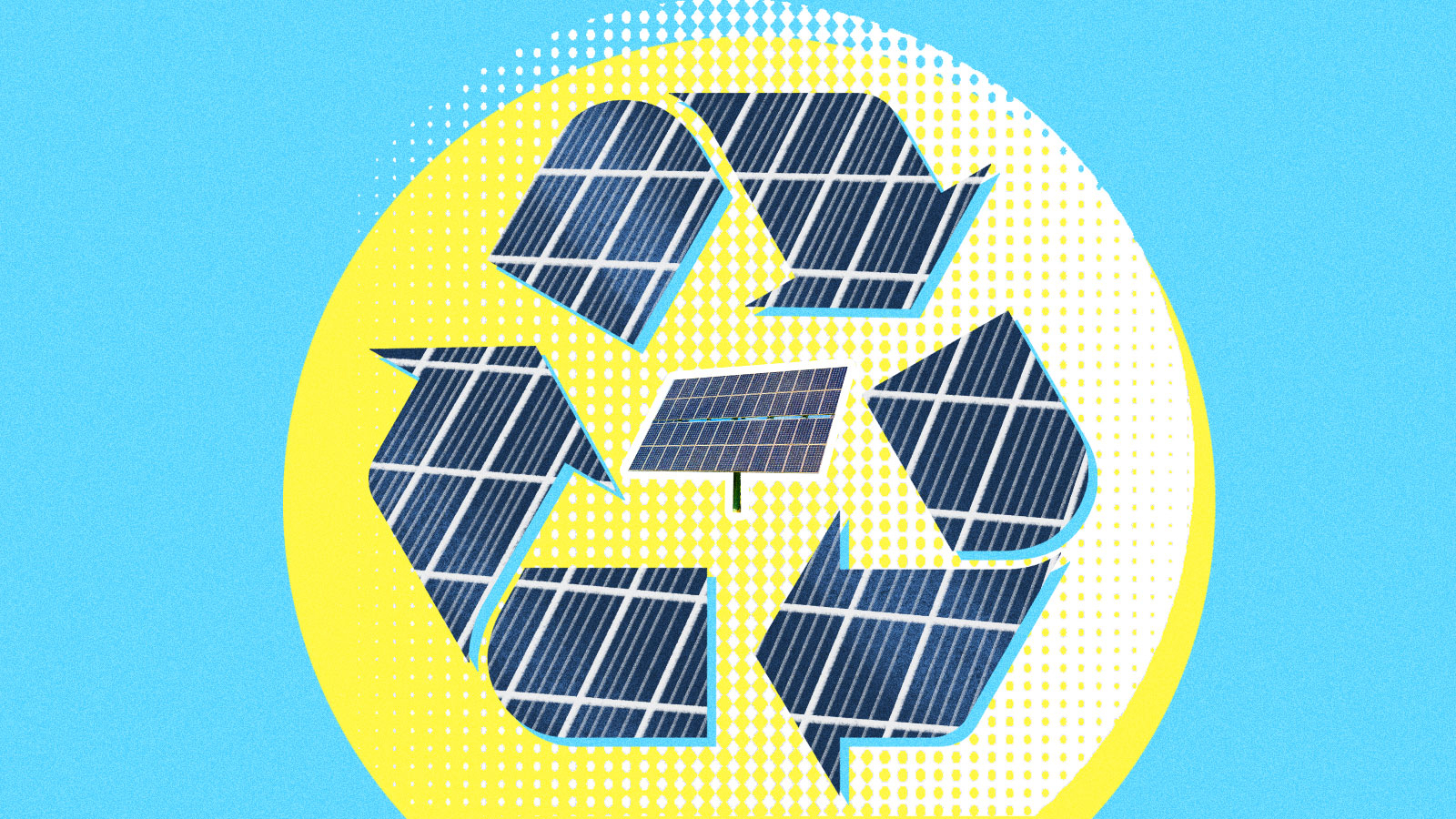 Solar panels are an increasingly important source of renewable power that will play an essential role in fighting climate change. They are also complex pieces of technology that become big, bulky sheets of electronic waste at the end of their lives — and right now, most of the world doesn’t have a plan for dealing with that.

But we’ll need to develop one soon, because the solar e-waste glut is coming. By 2050, the International Renewable Energy Agency projects that up to 78 million metric tons of solar panels will have reached the end of their life, and that the world will be generating about 6 million metric tons of new solar e-waste annually. While the latter number is a small fraction of the total e-waste humanity produces each year, standard electronics recycling methods don’t cut it for solar panels. Recovering the most valuable materials from one, including silver and silicon, requires bespoke recycling solutions. And if we fail to develop those solutions along with policies that support their widespread adoption, we already know what will happen.

“If we don’t mandate recycling, many of the modules will go to landfill,” said Arizona State University solar researcher Meng Tao, who recently authored a review paper on recycling silicon solar panels, which comprise 95 percent of the solar market.

Solar panels are composed of photovoltaic (PV) cells that convert sunlight to electricity. When these panels enter landfills, valuable resources go to waste. And because solar panels contain toxic materials like lead that can leach out as they break down, landfilling also creates new environmental hazards.

Most solar manufacturers claim their panels will last for about 25 years, and the world didn’t start deploying solar widely until the early 2000s. As a result, a fairly small number of solar panels are being decommissioned today. PV CYCLE, a nonprofit dedicated to solar panel takeback and recycling, collects several thousand tons of solar e-waste across the European Union each year, according to director Jan Clyncke. That figure includes solar panels that have reached the end of their life, but also those that were decommissioned early because they were damaged during a storm, had some sort of manufacturer defect, or got replaced with a newer, more efficient model.

When solar panels do reach their end of their life today, they face a few possible fates. Under E.U. law, producers are required to ensure their solar panels are recycled properly. In Japan, India, and Australia, recycling requirements are in the works. In the United States, it’s the Wild West: With the exception of a state law in Washington, the U.S. has no solar recycling mandates whatsoever. Voluntary, industry-led recycling efforts are limited in scope. “Right now, we’re pretty confident the number is around 10 percent of solar panels recycled,” said Sam Vanderhoof, the CEO of Recycle PV Solar, one of the only U.S. companies dedicated to PV recycling. The rest, he says, go to landfills or are exported overseas for reuse in developing countries with weak environmental protections.

Even when recycling happens, there’s a lot of room for improvement. A solar panel is essentially an electronic sandwich. The filling is a thin layer of crystalline silicon cells, which are insulated and protected from the elements on both sides by sheets of polymers and glass. It’s all held together in an aluminum frame. On the back of the panel, a junction box contains copper wiring that channels electricity away as it’s being generated.

At a typical e-waste facility, this high-tech sandwich will be treated crudely. Recyclers often take off the panel’s frame and its junction box to recover the aluminum and copper, then shred the rest of the module, including the glass, polymers, and silicon cells, which get coated in a silver electrode and soldered using tin and lead. (Because the vast majority of that mixture by weight is glass, the resultant product is considered an impure, crushed glass.) Tao and his colleagues estimate that a recycler taking apart a standard, 60-cell silicon panel can get about $3 for the recovered aluminum, copper, and glass. Vanderhoof, meanwhile, says that the cost of recycling that panel in the U.S. is anywhere between $12 and $25 — after transportation costs, which “oftentimes equal the cost to recycle.” At the same time, in states that allow it, it typically costs less than a dollar to dump a solar panel in a solid waste landfill.

“We believe the big blind spot in the U.S. for recycling is that the cost far exceeds the revenue,” Meng said. “It’s on the order of a 10-to-1 ratio.”

Most solar manufacturers claim their panels will last for about 25 years. That means the solar e-waste glut is coming.

If a solar panel’s more valuable components — namely, the silicon and silver — could be separated and purified efficiently, that could improve that cost-to-revenue ratio. A small number of dedicated solar PV recyclers are trying to do this. Veolia, which runs the world’s only commercial-scale silicon PV recycling plant in France, shreds and grinds up panels and then uses an optical technique to recover low-purity silicon. According to Vanderhoof, Recycle PV Solar initially used a “heat process and a ball mill process” that could recapture more than 90 percent of the materials present in a panel, including low-purity silver and silicon. But the company recently received some new equipment from its European partners that can do “95 plus percent recapture,” he said, while separating the recaptured materials much better.

Some PV researchers want to do even better than that. In another recent review paper, a team led by National Renewable Energy Laboratory scientists calls for the development of new recycling processes where all metals and minerals are recovered at high purity, with the goal of making recycling as economically viable and as environmentally beneficial as possible. As lead study author Garvin Heath explains, such processes might include using heat or chemical treatments to separate the glass from the silicon cells, followed by the application of other chemical or electrical techniques to separate and purify the silicon and various trace metals.

“What we call for is what we name a high-value, integrated recycling system,” Heath told Grist. “High-value means we want to recover all the constituent materials that have value from these modules. Integrated refers to a recycling process that can go after all of these materials, and not have to cascade from one recycler to the next.”

In addition to developing better recycling methods, the solar industry should be thinking about how to repurpose panels whenever possible, since used solar panels are likely to fetch a higher price than the metals and minerals inside them (and since reuse generally requires less energy than recycling). As is the case with recycling, the E.U. is out in front on this: Through its Circular Business Models for the Solar Power Industry program, the European Commission is funding a range of demonstration projects showing how solar panels from rooftops and solar farms can be repurposed, including for powering e-bike charging stations in Berlin and housing complexes in Belgium.

Recycle PV Solar also recertifies and resells good-condition panels it receives, which Vanderhoof says helps to offset the cost of recycling. However, both he and Tao are concerned that various U.S. recyclers are selling second-hand solar panels with low quality control overseas to developing countries. “And those countries typically don’t have regulations for electronics waste,” Tao said. “So eventually, you’re dumping your problem on a poor country.”

For the solar recycling industry to grow sustainably, it will ultimately need supportive policies and regulations. The E.U. model of having producers finance the takeback and recycling of solar panels might be a good one for the U.S. to emulate. But before that’s going to happen, U.S. lawmakers need to recognize that the problem exists and is only getting bigger, which is why Vanderhoof spends a great deal of time educating them.

“We need to face the fact that solar panels do fail over time, and there’s a lot of them out there,” he said. “And what do we do when they start to fail? It’s not right throwing that responsibility on the consumer, and that’s where we’re at right now.”

If we thought that ordinary

If we thought that ordinary landfills were our biggest problem we are in for another consumer driven disaster. E-Waste is another symptom of the profoundly disfunctional consumer driven economy that has turned our planet into largely uninhabitable no-go zones.

One doesn't have to put too much distance between oneself and our thoroughly blighted urban/suburban world to recognize the huge mess we have made of this planet. I wonder how much our children will blame us for this foul filth.

Let's not fall into doom and

Let's not fall into doom and gloom: PV panels probably don't fail catastrophically. Instead, most will continue to work, but at lower output. I suspect most users will accept the reduction and continue to use panels well beyond 25 years.

It seems to me that the path

It seems to me that the path with more hope is to aim at developing solar cells that will last much longer and are not so difficult and expensive to recycle.