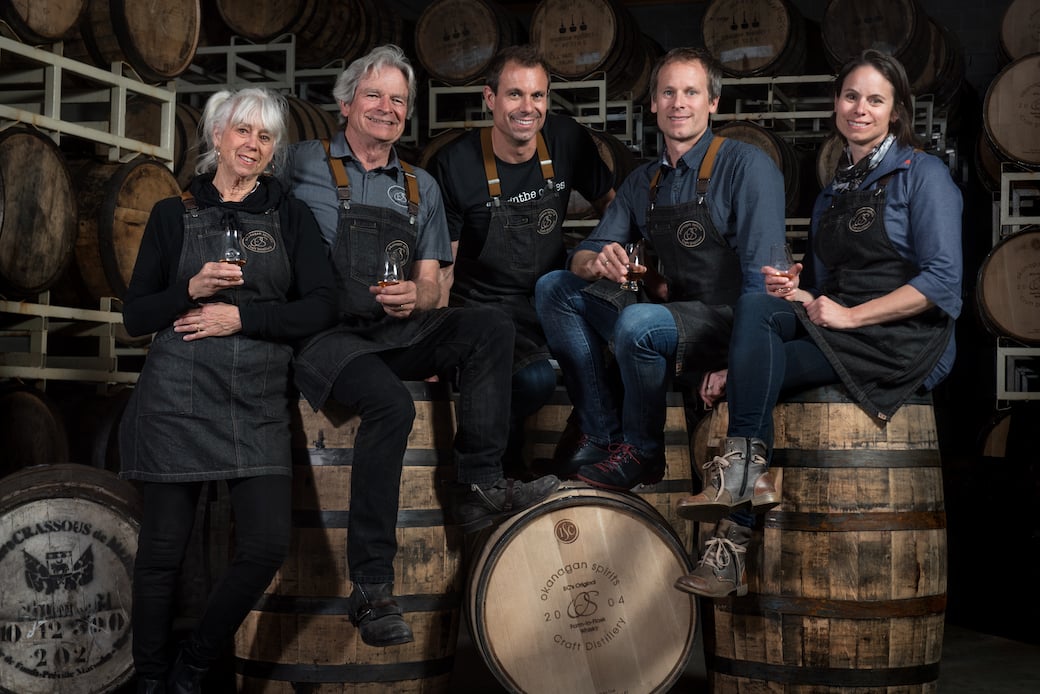 Tyler Dyck lifts a dram of whisky to the light, musing that it holds a field — distilled.

It’s the kind of taste the Okanagan-based distiller and president of the Craft Distiller’s Guild of B.C. says could spur renewal of B.C. farms — but only if there are changes to a tax that's deeply rooted in Canada’s history.

“(Making) whisky, that’s the same process as making beer,” he explained. “Except we take the water out of the beer, put it in barrels — and I have to use ten times the amount of grain.”

In 2019, Canadians purchased an average of 2.1 litres of spirits per capita, representing roughly 27 per cent of their annual alcohol consumption.

That’s about 75 million litres of spirits consumed annually, and with only a few hundred small-scale distillers in the country, most of those litres come a few from industrial distilleries marketing their products under different names said Dyck.

These facilities produce millions of litres a year and rely on industrial grain farms — a form of agriculture that has prevailed across North America since the 1950s, and that has led to farm consolidation, fewer farmers and increased pollution and greenhouse gas emissions.

It’s a situation that small-scale distillers are looking to change — a change they say can only come through cuts to excise taxes. An excise tax is a tax levied at the moment of production, not the moment of sale.

Spirits are currently charged an excise tax to the tune of roughly $12.61 per litre, compared to an excise tax of zero (until June 30, 2022) for wine and between $0.03 and $0.20 per litre for beer. For beer, the excise tax is calculated based on the government’s estimate of “social harm” caused by a molecule of alcohol.

The taxation rate for spirits isn’t proportional to the amount of alcohol they contain — and it's preventing a boom in small-scale distilleries similar to the one seen in craft breweries over the past 20 years says B.C. distiller Tyler Dyck.

About 80 per cent of Canadians drink, and at least 4.5 million of them risk chronic conditions such as liver disease and cancer. Costs related to alcohol equalled about $14.6 billion in 2002, according to a 2016 government report.

The report also said that alcohol’s harmful impacts were directly related to how it is consumed, and evaluating its impact “is complicated.”

Still, Dyck said the taxation rate for spirits isn’t proportional to the amount of alcohol they contain — and it's preventing a boom in small-scale distilleries similar to the one seen in craft breweries over the past 20 years. Employment in breweries almost doubled in that period, with 15,540 people working in the industry by 2019.

He noted that in 2017, the American government dropped the excise tax on a distiller’s first 100,000 proof gallons (raw alcohol) by 400 per cent. The drop led to a boom in small-scale distillers, with close to 1,000 new distillers establishing themselves in the country over the past two years, and existing producers growing larger.

Dyck said Canada could see similar growth — with a reduction in the excise tax.

It’s a familiar tune for Shirley Tillotson, professor emeritus of history at Dalhousie University and expert in the history of Canadian taxation.

“One reason to tax alcohol is that it’s a luxury, not subsistence. And it’s a nice reliable source of income, because people are not going to stop consuming it. (Alcohol) has its oldest foundation as a tax base,” she said.

For instance, Nova Scotia’s first grammar school, founded in the 1790s, was funded exclusively through a tax on alcohol.

That trend continued: Until income taxes were introduced in the 1940s and 1950s, about 15 per cent of government revenue came from excise taxes on alcohol. That included both imports and domestic production.

Unsurprisingly, for a product that was so valuable to the government, alcohol was a political football.

“It was very intimately a part of how you made political life work in 19th century Canada,” she said. It even shaped the Canadian Constitution.

Nor has the pattern changed much.

“We’re totally fine paying our proportional 'sin' tax,” Dyck said. “We’re not asking for a handout. If you’ve determined that a beer alcohol molecule has this much social harm, that same molecule can’t be taxed 20 or 40 per cent higher (for spirits).”

In other words: Why should small-scale distillers — who don't benefit from economies of scale like their larger, industrial competitors — be taxed differently than craft brewers and wine producers?

“It’s a pretty standard type of request,” said Rick Barichello, a professor of food and resource economics at the University of British Columbia.

Industries are always asking for a special subsidy, he explained, and will try to wrap themselves in desirable attributions such as increased agricultural activity or more employment. The government needs to evaluate whether the loss of that income will be compensated through the sector’s overall economic growth — and it might not.

“You could also spend directly on farms producing food,” he said. “Or that money could be used to buy COVID-19 supplies like gloves and masks.”