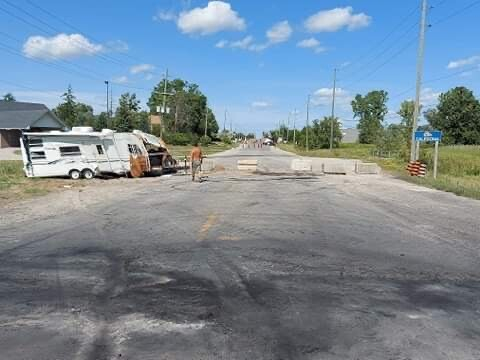 The federal government agreed Friday to negotiate a land claim with Six Nations of the Grand River after weeks of tension, but Ontario Premier Doug Ford struck a different tone.

“It doesn't matter who you are, where you're from, whatever you're doing, you come after the police, you're darn right I'm going to protect our police,” Ford told reporters Friday in a joint press conference with Prime Minister Justin Trudeau.

Since July 19, Haudenosaunee people and allies have been peacefully occupying a construction site in Caledonia, Ont., near Hamilton, that’s slated for a housing development. The demonstrators have renamed the site 1492 Land Back Lane, and say the area is part of a disputed tract of land that was promised to Six Nations.

The people at 1492 Land Back Lane, who identify themselves as land defenders, also say the community wasn’t properly consulted about the development, McKenzie Meadows.

Six Nations of the Grand River have pushed the provincial and federal governments to settle claims to the disputed land for decades, but the issues have never been resolved, not even after a 2006 conflict. Federal ministers agreed Friday to sit down and negotiate with Six Nations, CBC reported.

“We need to come together to find a peaceful resolution for this that involves the entire community,” Trudeau told reporters Friday, moments before Ford commented on the dispute.

“I look forward to continuing to work seriously on finding the right path forward for everyone in the region.”

Tensions have simmered at the site since the end of July after the company that bought the lot, Foxgate Development, got a court injunction to force the land defenders to leave.

Ontario Provincial Police arrested people at the site on Aug. 5, and said rocks were thrown at officers. The group soon returned to 1492 Land Back Lane, and more supporters arrived earlier this week, but police remain in the area and could enforce the court order again at any time.

The day after the clash, Ford said he was disappointed. “You just can't go in and take over people's future homes. It's wrong,” he added.

The federal government agreed Friday to negotiate a land claim with Six Nations of the Grand River after weeks of tension, but Ontario Premier Doug Ford struck a different tone. #onpoli

Then, on Thursday, Ford said he thought dialogue was a better way to solve the issue. “I don't care who you are, you start attacking our police, I'll come out swinging, simple as that,” he said. (Ford made the statement with a row of OPP officers standing behind him as he announced funding for 200 more provincial police hires, a contentious decision as many Canadians call attention to racial discrimination in policing and support grows for movements aimed at defunding police.)

Ford doubled down on the comments Friday, saying his job is to protect all Ontario residents, “including the Indigenous community and our police officers.”

In a statement Thursday night, 1492 Land Back Lane accused Ford of stoking further tension. The group has worked with the OPP to take down barricades, but rhetoric from Ford and other local politicians encourages vigilantes who have come to Six Nations and started conflicts, the statement said.

“We are here because we are committed to upholding our sacred responsibility to the land and future generations,” said spokesperson Skyler Williams in the statement.

“Every day our community makes progress in our discussions and our healing from the generations of oppression we have experienced. The tactics, timelines, and threats of the OPP and politicians are unrealistic and unreasonable given how complex the issues are that are being dealt with here.”

In the statement, 1492 Land Back Lane asked Ford for an apology.

“We are working hard to de-escalate the situation and to find a peaceful resolution,” the statement read.

Dispute over territory goes back to 1784

The Six Nations are the Mohawk, Seneca, Oneida, Cayuga, Onondaga and Tuscarora. Originally, the nations ⁠— also known as the Haudenosaunee Confederacy — lived in what is now New York state.

Many members of the confederacy fought alongside Britain in the American Revolution because the British promised they could go back to their homelands. But in the end, the British ceded the Haudenosaunee territory to the United States without the nations’ consent.

In 1784, Thayendanegea (also known as Joseph Brant) secured a tract of land for many of the Six Nations people on the Grand River, which flows through southwestern Ontario, from then-Quebec governor Sir Frederick Haldimand. Haldimand promised Thayendanegea 10 kilometres of land on either side of the waterway from its source until it flows into Lake Erie.

Disputes over the meaning of that land transfer started almost immediately. One major problem: Haldimand had promised Six Nations land at the Grand River’s headwaters that the Crown didn’t actually own. Canada later bought that land, but did not transfer it to Six Nations as Haldimand originally promised.

Much of the remaining land was later leased, though Six Nations have said the community wasn’t compensated for many of those leases. About five per cent of the land Haldimand originally promised currently belongs to Six Nations.

The land where McKenzie Meadows is slated to be built doesn’t belong to Canada, the land defenders say.

“The Haldimand Proclamation pre-dates Canada as a country,” 1492 Land Back Lane said in the statement Thursday night.

“Our community has existed here for over 200 years and our rights and title are entrenched in the Canadian Constitution. Denial of this reality is racist and validates people who wish to cause harm to our people.”

Part of the problem, the land defenders say, is that some community members feel they weren’t properly consulted.

In a situation that has echoes of the Wet’suwet’en land title dispute that led to widespread protests in early 2020, the Six Nations’ elected chief and council agreed to support the McKenzie Meadows development, while the hereditary Haudenosaunee Confederacy Chiefs Council has come out in support of the demonstrators.

The elected council accepted $352,000 from Foxgate to publicly support the development and help quell protests, APTN reported. Community members at 1492 Land Back Lane have said they weren’t properly consulted and didn’t consent to that decision.

It’s not clear when discussions between the federal government and Six Nations will begin.

In its statement, 1492 Land Back Lane said it will continue to occupy the site and secure a good future for Six Nations people.

“By continuing to criminalize Indigenous Peoples, the province and its police force maintain their colonial legacy of racism, inhumanity and genocide,” the statement said.