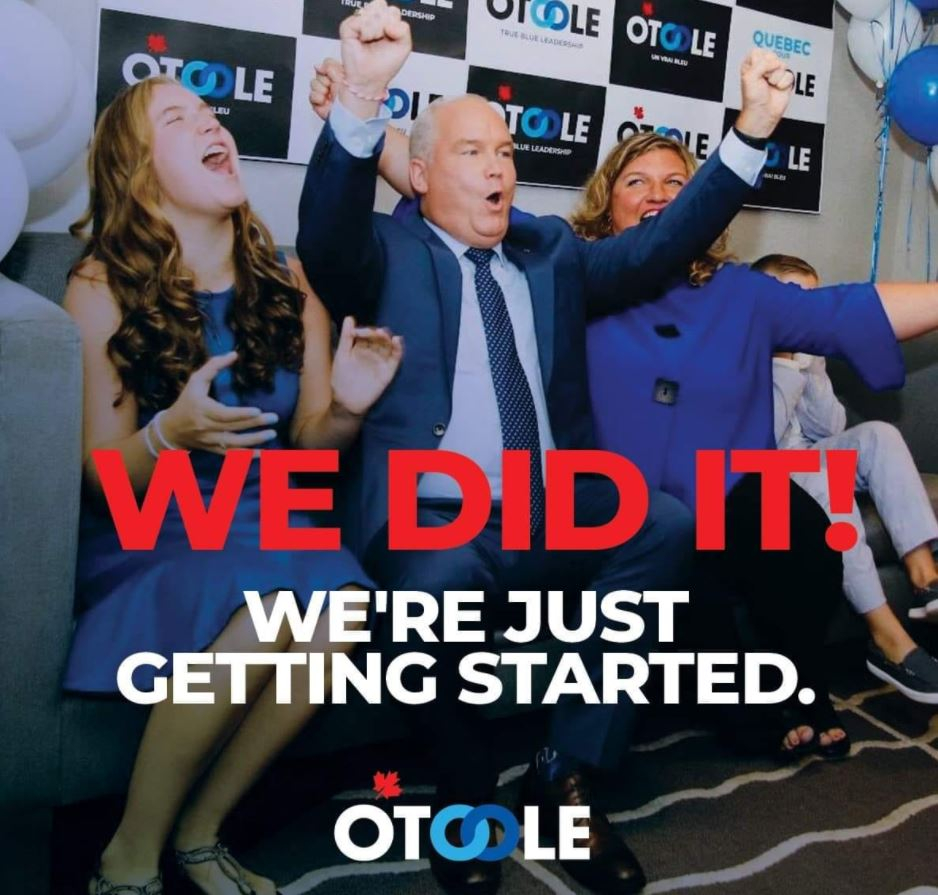 It is encouraging to see that Erin O’Toole’s leadership website has a well-presented climate change plan, decorated with the requisite frozen ocean scene. It includes a six-point “approach,” seven policy criteria and six priorities to “contribute meaningfully to lowering global GHG emissions.” The six priorities are:

Although understandably short on detail, as the newly minted Conservative leader, it is worth examining the approach, criteria and priorities O’Toole has articulated to see what may be gleaned from the language. Before delving into that, one must get past the very first line of his climate plan, which states: “A carbon tax is not an Environmental Plan, it is a Tax Plan.”

I agree with this statement, although perhaps for different reasons. While a carbon tax does not solve all environmental problems, it is a smart way to reduce carbon-related greenhouse gas emissions, and is most certainly the policy tool most recommended by economists and business leaders in Canada, including many of Canada’s largest oil producers.

A carbon tax is not sufficient for addressing many greenhouse gases (methane, nitrogen oxides), nor even the majority of carbon-related greenhouse gases. It is an important part of the climate policy mix, but not the economy-bashing bogeyman the Conservatives portray it to be, nor the climate panacea touted by economists. A comprehensive mix of policies, programs, investments, incentives and regulations are needed.

Carbon-tax bashing was table stakes for the leaders in appealing to the western base of the Conservative party; all four Conservative candidates caved to the populist idea that a carbon tax is somehow economically harmful, when study after study by the world’s leading economists show the opposite to be true.

O’Toole’s six-point “approach” is very oil-industry-centric, stating climate change is a global problem, a.k.a. not much we can do about it on our own, and it repeats the tired refrain of trying to convince the world to buy Canada’s “dictatorship-free” oil.

Perhaps the national Conservatives will follow Ontario Premier Doug Ford’s lead and we will see gas pump stickers proudly declaring our oil to be “free from dictators,” but then the conundrum will be where the U.S. fits, an important question if President Donald Trump returns.

Strangely, the only country the O’Toole platform references is Russia, stating boldly, “we cannot afford to become reliant on energy from countries like Russia.” We are not even close to being reliant on Russia — in fact, Russian oil imports into Canada are so negligible that they do not appear in statistics.

Two-thirds of our oil imports come from the United States, where, until recently, they had very strong environmental standards and a legitimate democracy. Presumably, those characteristics will return in two months time, and Canada will be in fierce competition with a much more powerful oil giant — Russia is not our problem.

"Polling conducted in Canada made it clear in the last election the lack of a serious climate change plan was a factor for those who voted against the Conservatives. A lack of a serious plan will jeopardize the party's future chances."

I agree wholeheartedly with O’Toole’s fifth approach of Canada being a world leader in zero-emissions technologies, and that this is an important priority from a domestic solution and global export perspective. Where governments of all stripes fall down on this point is that in order to build a strong export industry, we first need to build a strong domestic industry, and that means establishing the regulatory and procurement environment that favours domestic low-emission technologies.

Moving to O'Toole's “criteria” is where things get most interesting. It is where the Conservatives have boxed themselves into a corner by stating that policies will be “founded on proven market-based principles for incenting positive economic change,” “making industry pay,” “forging a national … pricing regime” and “simplifying the tax code.”

This sounds very much like a carbon tax, or certainly a carbon-pricing mechanism of some design. Perhaps like the one in Alberta, or the cap and trade system that Doug Ford scrapped in Ontario, or Manitoba’s new Green Levy, or the output-based performance standard Saskatchewan is proposing — all variations of a national pricing system. So, after all the political posturing and bluster, the good news is it looks like the Conservatives are, in fact, proposing a carbon price, just don’t call it a tax!

Alberta once proudly declared it was the first jurisdiction in Canada to price carbon — a truth now lost on many Conservatives. Add to this Premier Jason Kenney's government adopting the sophisticated provincial pricing mechanism brought in by the NDP, covering 75 per cent of emissions while keeping the revenues in Alberta, and we have the making of a serious strategy.

It may take one more round of flogging carbon-tax misinformation before some Conservatives realize the extent of their internal inconsistency. With O’Toole supporting provincial jurisdiction on carbon pricing and many of the provinces joining Kenney in establishing reasonable provincial pricing regimes, there is reason for hope.

And the criteria get mostly better, with references to investing in mitigation programs, critical infrastructure, protecting floodplains, supporting vulnerable regions, a reference to Lyme disease that's notably thoughtful, and “showing the world we are willing to do our part.”

The six priorities are hit-and-miss, and revert back to traditional technological solutions in the energy sector while missing many of the important economy-wide measures to help the regions of Canada without oil, as well as addressing the bulk of Canada’s climate change challenges. No mention of the auto sector or transportation at all, or building efficiency (the single most cost-effective measure), and no mention of the agricultural sector, where there are significant emissions and more importantly, tremendous opportunities to engage farmers and ranchers in solutions. And natural solutions have been left out, a sure winner for the conservation orientation of conservatives.

Hydrogen, a great nation-building and climate fighting energy supply, where Canada and Alberta have strong competitive advantages, is absent. Coal (eliminating it), gas, nuclear, carbon capture and oil dominate the priorities, as they dominate the conversation in Alberta. It appears that this section has been crafted by those working in the energy production sector and misses entirely major parts of the Canadian economy where we will likely see greater proportionate economic and technological growth and innovation, as carbon-intensive industries decline over time.

In this vein, reference to Canada as an “ESG Global Energy Thought Leader” echoes oil industry concerns over the vast withdrawal of foreign investment over the past several years, most notably in the oilsands. A valid concern which again needs to be framed in the more comprehensive international language of “sustainable finance.”

Polling conducted in Canada (mostly in Ontario's critical 905 region) made it clear in the last election the lack of a serious climate change plan was a factor for those who voted against the Conservatives. A lack of a serious plan will jeopardize the party's future chances.

Of the four Conservative leadership candidates, O’Toole appears to understand this the most, and has put together what could be an important start to a meaningful plan. It also augurs well for a departure from the past several years, where the Conservatives used climate change as a political wedge “pitting one part of the country against another” as the O’Toole plan suggests Prime Minister Justin Trudeau has done.

The O’Toole team understands that climate change is a serious environmental problem, a risk to the Canadian energy sector and an opportunity to promote clean technology and competitiveness.

Canada now has many well-established organizations that bring together energy experts, businesses, academia and governments working on the major climate change solutions, including organizations focused on energy efficiency, the hydrogen economy, electrification, sustainable finance, engaging farmers, and more. Many of these groups, I am sure, would welcome an opportunity to help Erin O’Toole put more meat on the bones and give the Conservative Party a solid plan “to contribute meaningfully to reducing global greenhouse gas emissions.”

Climate change, and investing in a clean post-pandemic economy will, without question, be top-of-mind for voters in the next federal election. Having the Conservative Party contribute to a supportive and serious national conversation on different pathways to achieve Canada’s climate change commitments is most welcome news.

Thanks to Bruce Lowrie for

Thanks to Bruce Lowrie for helping to move the discussion away from climate change as a wedge issue. He gives us many reasons to continue being suspicious of the Conservatives on climate change, while showing that there is room for serious discussion of the issues. We need more of that and can't afford to continue using this existential issue as nothing more than a partisan issue for winning elections.

We badly need rational discussion concerning the future of oil. Oil, as fuel, has a declining future. There may be growing applications for oil as a chemical source. On balance, Canada, and producing provinces should be planning on a slower extraction rate, and higher attendant costs.

I said for years the tar

I said for years the tar sands should be very lucky to be able to produce at 2M Bbl/Day. The harperCons let it get right out of control starting in 2006. O'Toole better not try to say free emissions are a good thing because he won't get away with it this time.

With the cost of electricity

With the cost of electricity in Ontario (some of it gas-generated) and with the cost doomed to go way up as we stupidly refurbish nuclear plants so old they're dangerous, there's no way people could afford to heat their homes in winter on electricity. As it is, the raw cost of gas has increased in the past couple of years by 60%, and still the "carbon tax" is 75% the cost of the gas itself.
Economists speak of "the economy." And they're happy to see the big polluters get off scot free. I, for one, am not happy that the tax is on home heat in a city where we spend time at -30C, with is no viable alternative to gas heat. Frankly, the tax should be borne by the shareholders -- but wait: we bought a pipeline ... and besides, economists wouldn't like dinging the shareholders: that would be bad for "the economy."
Why on earth didja' think the petro companies agree to a carbon tax!!! They're not paying it, their shareholders aren't paying it, their big customers aren't paying it ... no, it's all paid by yeah, you got it: householders/taxpayers.

Re: "Promoting Canada as an

Re: "Promoting Canada as an ESG Global Energy Thought Leader" If I had a nickel for every time I've heard Canadian and American politicians talk about Canada or the US being "leaders" in the fight against climate change.... Why don't we get some humility and simply follow the lead and example of the (very few) nations who are actually doing something leadership-worthy? We are so arrogant as we subsidize and support the corporations and industries leading us to extinction. Sigh.