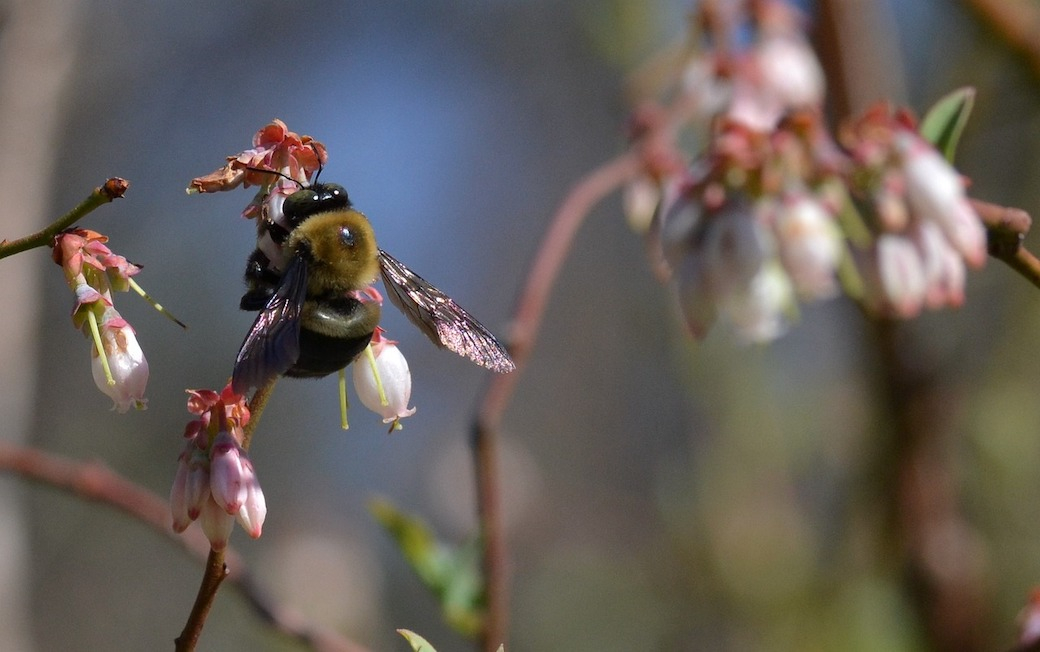 About 35 per cent of food crops globally - including blueberries - depend on pollinators like bees. Photo by growtwo/pixabay
Previous story
Next story

The Delta, B.C., farmer is not alone. Blueberries, raspberries, and tree fruits are some of B.C.’s most important crops, worth about $370 million combined — and they all depend on bees, butterflies, moths, and other pollinators for a successful harvest.

“Pollination is always a struggle,” said Bates, who owns a 90-acre blueberry farm.

That’s no surprise. Pollinators are in rough shape in British Columbia and beyond.

The International Union for the Conservation of Nature says that 16.5 per cent of vertebrate pollinators (e.g. birds) are threatened with global extinction.

In Europe, nine per cent of bee and butterfly species are threatened, and about a third of their populations are declining.

And in North America, bumblebees — a vital native pollinator — are estimated to have seen their relative abundance crash by 97 per cent, with the sharpest decline occurring in the past 30 years.

It’s a shocking decline, one driven by widespread pesticide use and habitat loss — byproducts of industrial agriculture. That system dominates North America’s fields and relies heavily on chemical fertilizer, pesticides, and monocrops.

“A number of features of current intensive agricultural practices threaten pollinators and pollination,” notes a 2016 report by the FAO Intergovernmental Science-Policy platform on Biodiversity and Ecosystem Service.

In North America, #bumblebees are estimated to have seen their relative abundance crash by 97 per cent. “A number of features of current intensive #agricultural practices threaten #pollinators and pollination,” notes a 2016 #FAO report.

That’s not good news for bees — or farmers. About 85 per cent of food grown globally depends on pollination, and in B.C., bees and other pollinators contribute about $538 million to B.C.'s agricultural industry.

Faced with declining bee populations, Bates and other farmers who rely on pollination have turned to semi-domesticated honeybees to pollinate their crops. They hire commercial beekeepers to truck several hundred hives of honeybees into their fields while the crops are flowering.

There are about 5,600 commercial beekeepers in Canada who operate roughly 480,000 colonies.

Once the field has been pollinated and the flowers turn to fruit, the beekeeper will pack up the hives, moving them to the next flowering crop, which is sometimes thousands of kilometres away.

It’s not an ideal system.

“When you have these very large and very simplified farms, farmers become reliant on bringing out these honeybees,” said Claire Kremen, a professor of conservation biology at the University of British Columbia who is leading a research project to increase pollinator habitat on farms in Delta, B.C. in collaboration with the Delta Farmland and Wildlife Trust.

The project aims to encourage farmers to plant some of their fields with pollinator-friendly flowers or to build hedgerows.

“It’s like honeybees are a kind of input to the farming system that needs to be purchased or supplied, whereas formerly, (pollination) was there and available.”

Beyond the cost of renting honeybees — Bates pays about $50,000 each year for roughly 425 hives — Kremen pointed out that they aren’t really up to the job.

Native bumblebees are better: They’re happy flying through the fields when it’s cold or rainy and have a trick to get pollen out of blueberries’ deep bell-shaped flowers.

“The bumblebee will grab onto the flower with their legs and, literally, they vibrate with their wings and it shakes the flower. And it happens that they do it at just the right frequency that it makes the pollen come out.”

But bumblebees, unlike their semi-domesticated cousins, don’t live in hives that are trucked around the country.

They stay in one place, rarely straying more than 10 kilometres from their hive, and need food throughout the year — not only for the few weeks blueberries are flowering.

Those habitats that don’t come cheap in B.C.’s Lower Mainland.

Farmland prices in Metro Vancouver range from $50,000 to $80,000 per acre for parcels of more than 40 acres, according to a 2016 report by researchers at Kwantlen Polytechnic University.

“With land costs, (farmers) really need to farm most of their acres. Without actually knowing the economic benefits (of more pollinator habitat), it’s hard to justify taking land out of production.”

That’s where Kremen’s research, which is supported by a $161,050 provincial-federal grant, comes in. The project aims to put a dollar value on native pollinators’ contribution, helping farmers weigh the cost of investing in hedgerows and other pollinator-friendly habitats against bringing in honeybees and having more acreage under production.

There’s already evidence from other places that increasing pollinator habitat might, in fact, be a boon to farmers.

About a million species are currently threatened with extinction globally and are going extinct at a rate up to hundreds of times faster than the average established over the past 10 million years.

Still, in 2019, the UN Intergovernmental Science-Policy Platform on Biodiversity emphasized the importance of “promoting good agricultural and agroecological practices … and more integrated landscape and watershed management.”

Those include the kinds of management practices Kremen hopes her research project will help make more common.

For Bates, whose blueberry farm is home to some plots in the study, those benefits have already started to arrive — even without unionized bees.

“You go in the fields late at night, and you stand and watch and listen, and the bumblebees are still working.”

Big agriculture, after covering all the flowering plants with insecticide: "Bees are insects?! Who knew?"

You said it. Perfectly.

You said it. Perfectly.
My father was an observer of nature, and took endless Super-8 footage of birds, insects, plants ... a couple of decades later, he might have filmed documentaries.
He retired in the very early '80s, and took up beekeeping as a hobby, after having spent the better part of a day watching bees moving in regular patterns on a stump in the backyard, and wondering at the dinner table what might be the purpose of that movement. I'd read in one of the books they'd bought for us as children, that bees "danced" to communicate various things to hive members, and he was hooked. Once it was known that locally produced honey was available, people came to the door looking to buy.
He developed a bear-deterrent system after the hives were knocked down ... by then, much of *their* habitat was destroyed by clear-cut logging ... and then when there was a shortage of queens for purchase, developed a method of over-wintering hives and raising queens.
Just around the time he became interested in the different flavors of honey that seemed to be produced from different crops, local farmers, most of them post WW2 immigrants from Holland, would offer him hive-space on their farms, because it improved crop yields and the quality of hay.
He noticed better survival rates in hives that were placed on farms without insecticides, and the improvement in the honey production when the bees didn't have to fly far.
I have a lot of pollinator "attractants" growing in my yard, and have noticed year over year fewer honey bees, in particular. There are a few keepers in the area, but I suspect one who lived nearby might have been forced to move them out when keeping them became thought of as act of helping the environment ... and the city made by-laws as to how far hives had to be from people. I've found a lot of people to be irrationally afraid of bees, especially honey bees, and to have little understanding of their important role in nature and agriculture.
It could be, though, because people in the neighbourhood use more insecticides, as a result of insects with no natural predators being imported along with flowers from abroad, and the extra challenges of changing climate and weather pattrns.
I cannot for the life of me understand why it is that people think re-planting only the species that grew here 100 and more years ago is wise, rather than inter-cropping with, or at least trialling, trees and shrubs that grew in places where the seasonal patterns were 100 years ago like ours are now.
It seems to me a case of extreme wishful thinking to believe that we can "bring back" the weather and climate of the past, within just a small number of generations. Not that any of us should do anything less than the best we can to support climate-healthy practices: just that we're too hooked on "magic bullets" and a truncated view of history, to understand something of how long it took to get where we are, and how long it'll take to get back to th extent that's possible, to where anything can even begin to approximate what things were before we threw it all away.

Great history lesson here. Thank you for sharing. My husband and I, too, have been watching and trying to support the pollinators. We are not farmers but own 4 acres of land nestled up to the National parc Orford in Québec. We have increasing numbers of wasp hives. Each year my husband is unhappy where they appear and we discuss how to move the hive or destroy it. Each year I convince him that we can live with them. We have never been stung or attacked by these insects. Letting them live out the season. Once they have left the hive we block the entrance or wall crack for the next season. Keeping the wasps at a distance from our home.
Bumblebee’s are less frequent but we have seen them. We are working our surroundings with nature, letting wild flowers and plants mingle with our planted areas. This supports more success with flowers popping up at all times throughout the season. The forest is around us with lots of places for the wild pollinators to make a home.