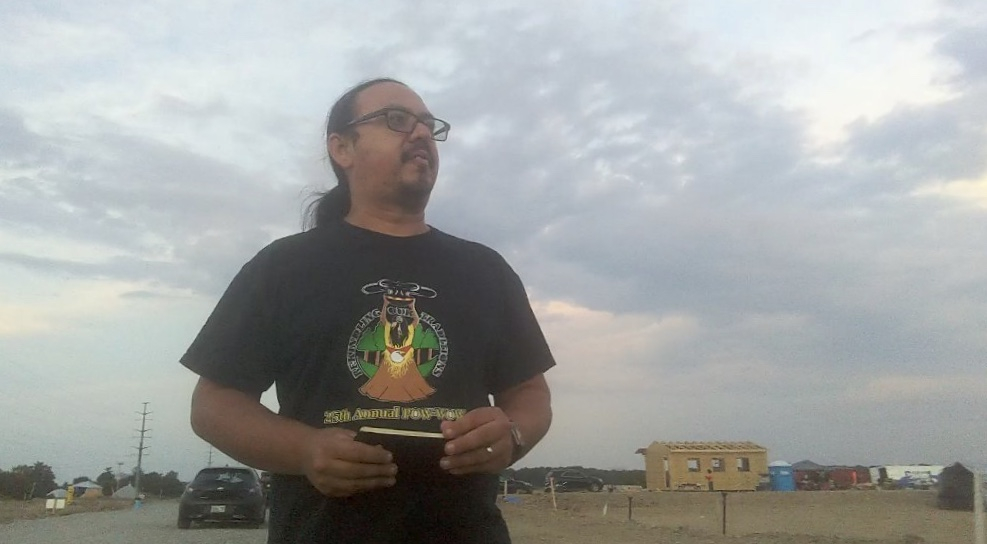 Indigenous journalist Karl Dockstader was arrested and charged with Mischief and Failure to Comply with a Court Order. He is due to appear in a Cayuga, Ont. courthouse on November 24. Photo supplied by Karl Dockstader
Previous story
Next story

Karl Dockstader is a proud Oneida of the Thames Bear Clan, husband, father and an aspiring storyteller. On Thursday, he was arrested and charged after reporting on the 1492 Land Back Lane occupation in Caledonia, Ont.

“It’s surreal,” said Dockstader during a phone interview with the National Observer on Thursday evening. “This isn’t supposed to happen like this. The idea that I can be a journalist, arrested and criminalized for telling a story, that seems like systemic racism to me.”

Dockstader is the co-host of the weekly radio show News Talk 610 CKTB, One Dish, One Mic, which focuses on Indigenous topics. Dockstader volunteers at the Niagara Native Friendship Center. And he's the current recipient of the Canadian Journalism Foundation and CBC Indigenous fellowship program.

His arrest prompted an outcry from journalists across Canada on social media.

“The arrest and laying of charges against award-winning journalist Karl Dockstader is part of a pattern to keep journalists from covering Indigenous disputes,” wrote Algonquin journalist Karyn Pugliese, who is also a Harvard Nieman Foundation fellow, and a journalism professor at Ryerson University.

“Canadian media never like to be the story, but when we lose the right to report, citizens lose their right to know. We only have democracy and human rights when we have a free press.”

Dockstader stayed in a tent at the Land Back Lane camp during the last week of August to report from the front lines of the conflict.

“It’s surreal. This isn’t supposed to happen like this. The idea that I can be a journalist, arrested and criminalized for telling a story, that seems like systemic racism to me." @karldockstader

“I honestly thought I was almost at no risk. But I’m an Indigenous journalist, even though it’s not supposed to be different for me, but growing up, the police were always the bad guys. So every night when I put my head on my pillow, in the back of my mind I knew there could be a moment when police would come crashing through my tent.”

The Six Nations Land Defenders are mobilizing to stop a housing development project called McKenzie Meadows bordering the town of Caledonia. The land defenders assert the land belongs to the Haudenosaunee as per the Haldimand Treaty of 1912 and the Silver Covenant Chain of Peace and Friendship, which outlined a tract of land for the Haudenosaunee. This land includes the disputed McKenzie Meadows development.

Foxgate Developments, the company behind the housing project, obtained an injunction on July 19 to have the land defenders removed. The injunction was enforced by the Ontario Provincial Police (OPP) on Aug. 5 and saw nine land defenders arrested.

The situation intensified on Aug. 6 after OPP officers shot a rubber bullet at and used Tasers on land defenders after the police force said rocks were thrown at them.

According to the OPP, 13 people have been arrested in connection with the Land Back Lane demonstrations.

“We as a society have spent the time since the COVID-19 pandemic to reflect. There’s something terribly wrong with racial inequality in our world and some of this has to do with Land Back Lane,” said Dockstader.

“It’s no secret there’s been a glaring vacuum of BIPOC reporting on stories and the genuine perspectives we bring to these stories. To be silenced is a form of white supremacy.”

Dockstader is charged with mischief and failure to comply with a court order and is due in a Cayuga courthouse on Nov. 24. In the meantime, one of his conditions stipulates staying away from Land Back Lane.

“It’s quite preposterous. He’s an independent journalist there for work and had a legal right to be there. The state knew he was a journalist, so it makes it even more ridiculous that he’s been charged.”

Lam says she’s tired of the mistreatment of BIPOC and intends to clear Dockstader’s name from any wrongdoing.

“The OPP are well aware that journalists have an established constitutional right to be present and cover matters of public interest,” said Jolly.

“Attempting to prevent a properly credentialed journalist from documenting a moment of contentious action is impermissible in a country like Canada. Journalism can never be silenced.”

Researcher Courtney Skye of the Yellowhead Institute was also arrested, the day before Dockstader.

Dockstader’s radio career is on the rise. Together with his co-host Sean Vanderklis, two podcast series have been featured on Canadaland and their signature show One Dish, One Mic is earning accolades across the country.

Dockstader says he plans to sit down with his daughters, who are 8 and 10, to explain what’s happened. His wife is “devastated.”

“I’m disillusioned and I feel bad for people who don’t have the resources I have. This shows that criminalization can happen to anyone.”

The National Observer reached out to the OPP for comment, but have not received a response.

I think that many jurists,

I think that many jurists, and even some police would allow that the court system is too often co-opted to be the blunt instrument for capitalist enterprise. White entrepreneurs are used to being treated as conquering heroes, offering economic activity, jobs, and benefits to humanity.

This is the profit driven picture of the world which has totally overtaken humanity. When such injunctions are issued they should be short term remedies that are conditional on contending parties entering into mediation. This heavy handed police operation is totally unnecessary in a nation that claims to be bound by the rule of law.

In this era, the rule of law is finally having to reckon with the blatant and egregious violations of not just natural law, but the very laws and treaties the colonizing powers themselves imposed on Canada's Indigenous peoples. Never, ever, succumb to the fallacy that those settlers did not know what they were doing. Their own words make it abundantly clear that the usurpation of indigenous lands and the rights to live on those lands, were conscious decisions on the part of our ancestors to drive to extinction the first nations.

The fact is, European settlement of North America was the product of a great migration from an overcrowded, perpetually at war continent, infested with the kinds of totalitarian governance the "democracies" now claim (mostly) to abhor. Not only did the European illegal immigrants, aliens, and asylum seekers flood this land mass they did so with the intent of eradicating the previous inhabitants, one way or another. It is of course especially ironic that this nation of immigrants and asylum seekers descendants now cannot face the consequences of their own so-called success. Everyone wants a part of the "dream" - without realizing just how much nightmarish anguish they will encounter, or how much genocide has preceded their own dreams.

Precisely the conditions the original immigrants fled, were re-created in their new settlements. Religious autocracies, caste ridden "plantations" worked by indentured labour and then slaves, re-created the European world of violently disparate social and economic classes. The only difference was the sparsely populated lands inviting those of the oppressed castes to flee to greener. freer pastures.

Now that we have pretty successfully occupied and despoiled those pastures the door to new immigrants is slammed shut and the reparations due to those dispossessed or formerly enslaved are being fought tooth, nail and by corrupted rules of law.