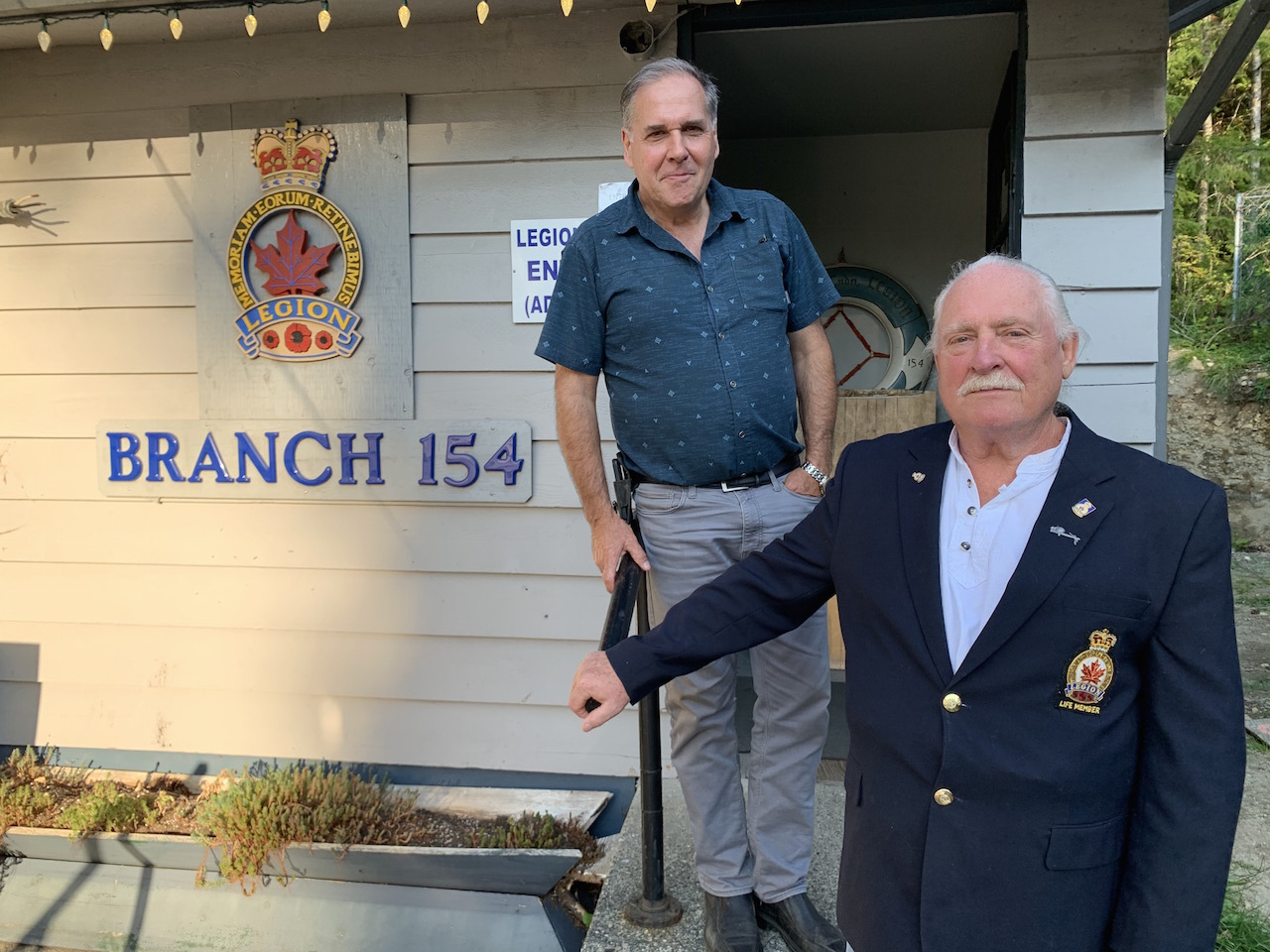 Treasurer Bill Bradshaw (left) and president Tom Vaniderstine say Royal Canadian Legion Branch 154 on Quadra Island is managing to keep the lights on, but any further pandemic measures will put them in peril. Photo by Rochelle Baker
Previous story
Next story

Legions are as intrinsic to small-town life as the local Tim Hortons or Canadian Tire, but they’re at risk of extinction if Ottawa doesn’t offer COVID-19 relief soon, the network’s top brass says.

The hub and heartbeat of many small communities across Canada, legions and are so much more than simply spots for veterans to go for a drink, Irvine said.

“We’re at risk here. At risk of losing everything they do, especially in smaller communities,” he said.

Repeated requests for help to the Ministry of Veterans Affairs and Prime Minister Justin Trudeau have not resulted in any concrete action or details from Ottawa, Irvine said.

The first local branch Irvine ever joined served a community with a grand total of 1,200 people.

“It was the centre of everything in that community,” Irvine said.

“We had music nights for musicians to come in every Saturday and the only cost at the door was bringing canned food for the homeless.”

There are 1,381 legions across Canada and close to 350 need immediate assistance to keep their doors open, he said.

“We’re at risk here. At risk of losing everything they do, especially in smaller communities,” Thomas D. Irvine, Royal Canadian Legion Dominion president on how many branches might have to close permanently due to Covid-19. @RoyalCdnLegion

Despite being volunteer-based organizations, legions found they were not eligible for federal COVID-19 relief funds rolled out for non-profit organizations.

But legions already under financial strain due to the pandemic are reluctant to risk any further debt, no matter how good the terms, he said.

“Many of these branches are still closed, and if they’re open, it’s at reduced capacity,” said Irvine.

“They're not making the money that if they take a loan, they can pay it back.”

In addition to raising funds for community causes, many branches also provide support services for veterans and their families, he said.

Bill Bradshaw, treasurer of the Royal Canadian Legion Branch 154 on Quadra Island in B.C., said the organization is squeaking by for the time being.

The legion is the only one on the island, which has a population of less than 3,000.

“We were basically shut down for three months, which really impacted us. We had zero income, obviously,” said Bradshaw.

But once pandemic restrictions eased up in June, the legion has been able to open on a limited basis and is currently earning enough to keep the lights on, Bradshaw said.

Because the legion is fairly big and has enough room for social distancing, it’s been able to offer meals a couple of nights a week, which is providing some income.

“We’re doing OK at the moment, but the reality is we don’t ever make much money,” Bradshaw said.

Most of the legion’s community programming, seniors’ lunches and activities, music evenings and fundraising are on hold due to the pandemic.

Bingo nights, one of the Quadra legion’s most successful fundraising activities, are also shut down.

“We’ve been able to have a smaller version of our meat draw, but that’s about it right now,” Bradshaw said.

“It can be a bunch of different things. We support young people in need or organizations that need a little help,” Bradshaw said.

The legion contributes regularly to the island’s elementary school and children’s centre to help with various purchases.

One particularly good year, the branch donated $10,000 to the hospital in Campbell River on neighbouring Vancouver Island to help build a grieving room for families in crisis.

Tom Vaniderstine, Branch 154 president, said the Quadra legion is lucky because islanders are really supportive, but he worries about other branches.

“Other legions are really in trouble. They were in trouble before COVID-19 hit,” he said.

But if B.C. goes into full lockdown again for any length of time, it would be hard for the Quadra legion to survive, Vaniderstine said.

North Island-Powell River MP Rachel Blaney has also been calling on Ottawa to establish a relief plan to help legions survive the pandemic.

There are 11 legions in her riding alone providing supports to veterans and their local community whose services are at risk, said Blaney, NDP critic for Veteran Affairs in a letter to the ministry.

But branches across the country are struggling because donations are down, and they can’t rent out their spaces, Blaney wrote.

“Losing those community hubs would be devastating, especially in more rural and remote areas,” Blaney said.

Irvine said the legion has never asked for — or wanted — government funding in the past, but needs support to bridge this crisis.

“But this is extenuating circumstances,” he said, adding other veterans service organizations are facing similar challenges.

“The legion is not only asking for ourselves, we're asking for all veterans groups.”

Yet despite all the challenges the pandemic has posed, legion volunteers are out still helping in their communities, he said.

Some are cooking and delivering meals, checking in on seniors and older veterans, and making and distributing masks.

“They're still out there plugging away, and doing everything the legion does, but they've got no income coming in,” Irvine said.