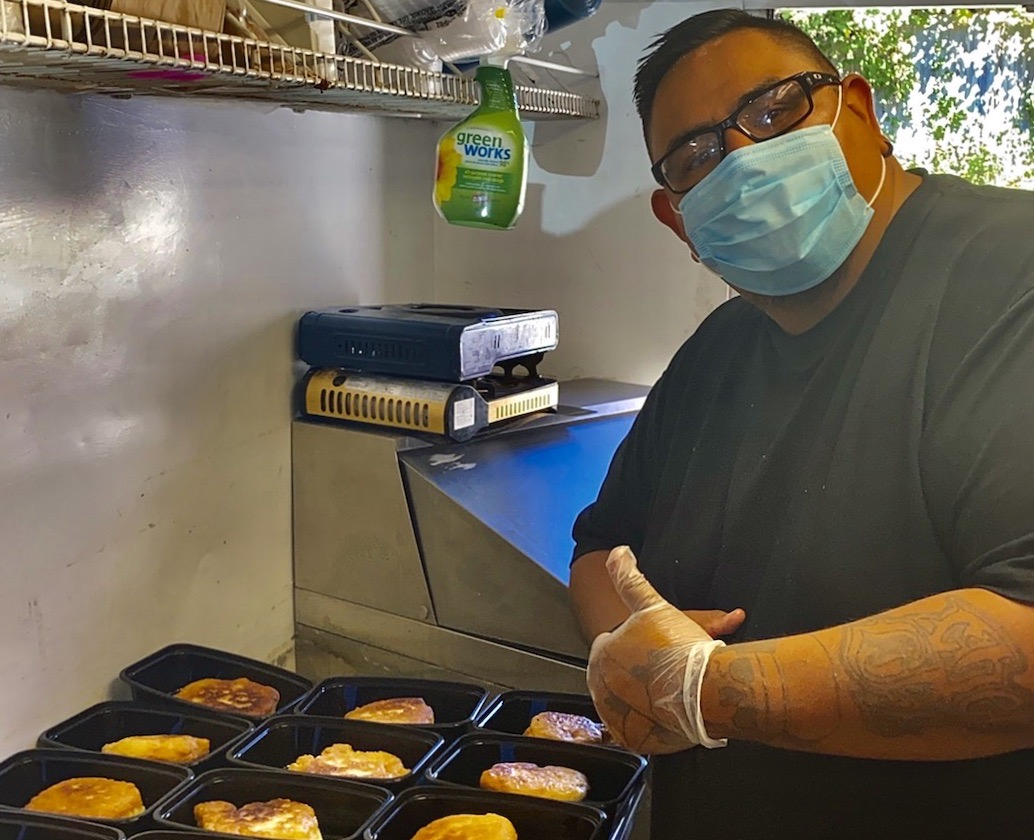 Paul Natrall — better known as Mr. Bannock — runs a food truck specializing in Indigenous fusion cuisine. He usually sells at festivals, but they've all been cancelled this year because of the pandemic. Photo by Mr. Bannock and team
Previous story
Next story

They’ve been the norm for the Squamish Nation chef and food truck owner who specializes in Indigenous fusion cuisine. Since he opened the business in 2017, Natrall — better known as “Mr. Bannock” — has been a popular fixture at festivals and other gatherings across B.C.’s Lower Mainland. Not this year.

“Pre-COVID, in the summertime, we were at huge events,” he said. “We’d make good (money that) would last us the whole year. Sadly, that’s not the case this year.”

British Columbia banned gatherings of more than 50 people when the pandemic started in March and most festivals and other events — the heart of Natrall’s business — were cancelled this year. And he wasn't alone: Lockdowns and physical-distancing measures have had a dramatic toll on Canada’s food service industry as a whole.

Food service sales crashed in April, dropping to $2.4 billion for the entire industry — the lowest sales reported in more than 20 years, according to a July survey by Restaurants Canada.

Restaurants, bars, and caterers like Natrall (food trucks are technically caterers) were hit particularly hard, reporting between a 75 per cent to 90 per cent drop that month.

Unsurprisingly, this crash was reflected in dramatic unemployment, with the industry reporting 615,000 laid-off workers in March and April — roughly a fifth of all layoffs in the country. And another 202,000 people remained employed, but didn’t work any hours.

The situation has improved slightly over the summer, with lockdowns easing and patio service making it easier for many establishments to operate, but in July, the industry remained more than 300,000 jobs short of where it was before the pandemic started.

“Not only where we were, but where we are (now) is very difficult.”

“Pre-#COVID, in the summertime, we were at huge events,” @MrBannockFood said. “We’d make (enough to) last us the whole year. Sadly, that’s not the case this year.” #Restaurant sales crashed in April, dropping to $2.4 billion across #foodservice

In a recent survey, more than 90 per cent of the organization’s members said they expected their autumn sales to be significantly lower compared to last year — and that it will take several years for them to recover, even if no further restrictions put in place, he said.

The industry already operates on a razor-thin margin, von Schellwitz explained, and the pandemic has forced most establishments to take on significant debt — even with federal and provincial supports.

These supports have proved vital, and maintaining them will be essential to helping the industry as a whole recover within a year or two. If they end before there is a vaccine or pandemic restrictions are lifted, it could take up to three years for the industry to find itself on stable financial ground, he said.

Following the insisting recommendation of @RestaurantsCA and other business associations, federal government has decided to extend #CECRA rent support program by at least one month. Thanks. https://t.co/8Xyk13skIX #polcan #cdnpoli #rent #covid19

“Without ongoing and new assistance, many in the food service industry will not make it,” warns an August submission from Restaurants Canada to the federal standing committee on industry, science, and technology.

In the meantime, everyone in the industry is doing what they can to stay afloat. Including Natrall.

“We’ve taken odd jobs here and there, we’re offering takeout and pick-up from North Vancouver, and I’ve been doing lots of digital media and social media,” he said.

These moves haven’t brought him anywhere close to his sales volumes of previous years.

“We signed up for DoorDash and Uber Eats, but it hasn’t been busy,” he said.

Von Schellwitz also pointed out that the service fees these delivery companies charge restaurants mean that, often, they barely break even.

And as a caterer, Natrall can only sell at events or from his main location on one of the Squamish Nation’s reserves in North Vancouver.

That’s tough for business: Relatively few people pass through the community, he said, especially because of the pandemic.

The nation was on full lockdown until mid-May, and several recently announced cases in the community have Natrall worried — for his community, other Indigenous businesses, food and tourism businesses, and his food truck.

First Nations in B.C. have been extremely proactive in regard to the pandemic, with local lockdowns and other measures preventing a potentially devastating surge of cases in most communities. That has had a significant impact on tourism operators — including some chefs, Natrall said.

About 91 per cent of Indigenous Tourism BC’s stakeholders reported they had to close or operate at a limited capacity because of the pandemic, while 74 per cent of these businesses needed to lay off employees.

“I just really hope everything doesn’t start getting shut down again. That would be bad, not just for Mr. Bannock, but every single food and beverage industry,” Natrall said.