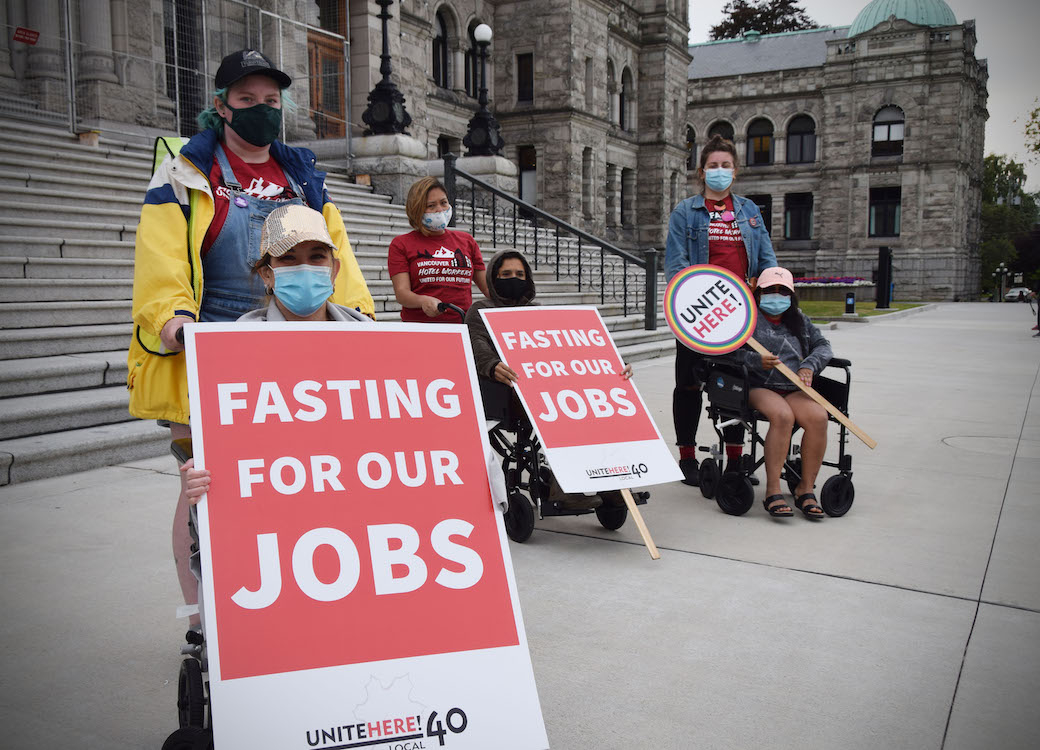 Restaurant and hotel workers in B.C. have been protesting COVID-19-related changes to provincial labour laws that mean they can be laid-off indefinitely - with no guarantee they will be recalled once business picks up. Photo provided by Michelle Travis.
Previous story
Next story

Twenty-four weeks ago, COVID-19 brought Canada to a standstill. A wait that, for chefs, cooks, and other laid-off employees, has no end in sight.

It’s a difficult situation, said Michelle Travis, a representative from UNITE HERE Local 40. The union represents people working in B.C.’s commercial kitchens, hotels, and airports — hard-hit industries that have relied on extensions of the province’s layoff laws that are keeping workers in limbo.

“There’s no protection for workers to get their jobs back,” said Travis.

Between January and July 2019, about 190,000 people worked in hospitality and food services.

When the pandemic hit in March, almost 40 per cent of those workers were laid off. Many haven’t returned: Between January and July 2020, only about 150,000 people were working in the sector.

In normal times, B.C.’s labour laws let employers temporarily lay off workers for 13 weeks. After this period, they either need to rehire the employee or give them severance pay.

“The business community really came down hard (on the province) to say, we can’t pay out severance, 'We need you to give us a delay,'” said Travis.

The labour ministry heeded the call. In late June, it almost doubled this window, to 24 weeks. That extension runs out at the end of August, but businesses that can’t bring back their employees can apply for additional extensions. That's on top of other business supports provided by the federal and provincial governments.

This lets businesses keep their workers laid off indefinitely, with no requirements to recall workers once business picks up again.

“You might have had 20 years in this job, and then there’s a pandemic and the employer gets to just fire you and start from the beginning again? It makes no sense,” said employment lawyer Susanna Quail.

“This change is giving a gift to employers (by) deferring their obligations to pay all their severance payments without requiring them to actually rehire anyone down the road,” she said.

Hotels and restaurants have struggled during the pandemic and it’s understandable they needed to lay off most of their staff and ask for provincial assistance. The issue, she said, is that the province isn’t mandating employers to give priority to their laid-off workers as their businesses start to recover.

“It’s in everyone’s best interest to keep workers and employers connected — and the B.C. government is focused on maintaining that relationship to protect jobs,” the labour ministry said in an email.

“Labour Minister Harry Bains has made it clear he expects employers and workers to work together so when businesses reopen, those workers who helped the business be a success prior to the pandemic have a job to go back to.”

She’s heard from some hotel workers who have been laid off without severance, with their employer citing pandemic-related losses to avoid the payment. Others have been forced to relinquish their full-time status — and the rights to severance and vacation pay it entails — to keep their jobs.

“That’s the most egregious thing we’ve heard so far,” she said.

Laid-off workers are eligible for the Canada Emergency Response Benefit (or CERB) during the pandemic, in addition to EI once it expires. They can also take other gigs — but only if they can return to their original jobs on short notice.

Quail noted that many hospitality workers, especially those who are unionized, have a lot to lose if they are fired or quit. Unionized workers who’ve been with the same employer for several years can accrue significant vacation time, pay raises, and other benefits — all of which are lost if they are fired and rehired on a new contract.

Keeping those benefits is a major incentive for these employees to agree to an extended layoff — even if there’s no certainty they will be rehired when business starts to pick up again, she said.

It’s a situation that hotel workers have been protesting by holding a hunger strike in Victoria for almost two weeks.

“A lot (of these workers) are immigrant women, people with limited education, limited other opportunities to get a unionized job and stay in a hotel for decades,” said Quail.

“You might have had 20 years in this job, and then there’s a pandemic and the employer gets to just fire you and start from the beginning again? It makes no sense.”