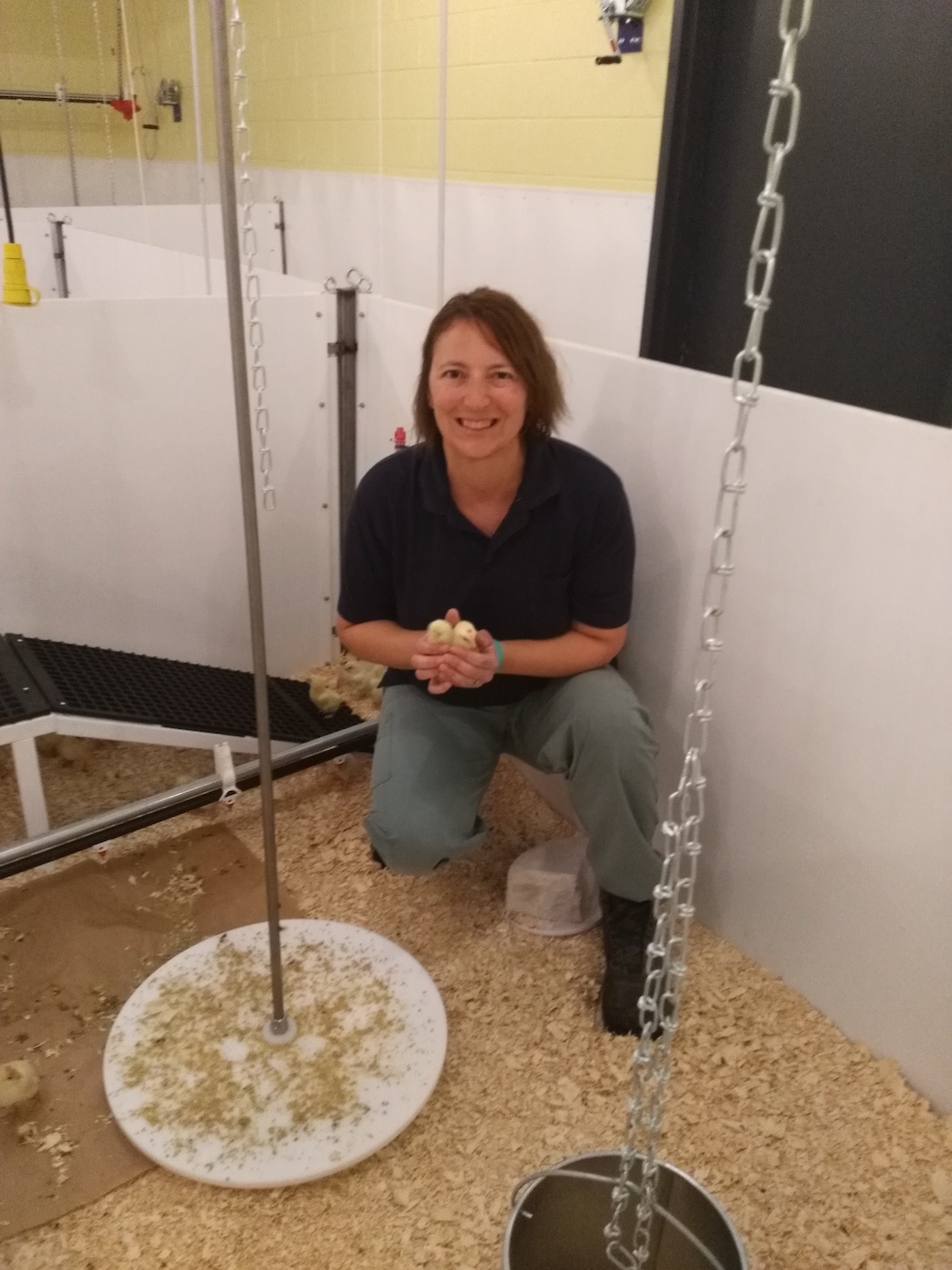 Slower growing chickens have better mobility, and muscle and cardio-vascular health, said Stephanie Torrey, a professor at the University of Guelph and co-author of a recent study on chicken welfare and growth rate. Photo provided by Stephanie Torrey
Previous story
Next story

The avian games were part of a recent study co-led by Torrey, an adjunct professor of animal science at the University of Guelph, that found making chickens grow slower was better for their well-being.

The most popular chicken breed raised today can be market ready in as little as a month. And while those birds may not be the healthiest, the Canadian poultry industry says slower growing birds would be bad for business, the environment — and consumer's pocketbooks

Poultry made up roughly 37 per cent of global meat production in 2017 — accounting for about 122 million tonnes.

And most of these birds, worldwide, come from a single breed: the Cornish Rock.

Chicken hasn’t always been popular for its meat, at least in North America. Until the Second World War, most chickens were raised in people’s backyards to produce eggs and, eventually, be turned into a stew. Chicken wasn't eaten daily, or even weekly.

But during the war, most red meat (beef, lamb and pork) produced in Canada and the U.S. was sent to support the war effort, leaving those on the home front to find alternate protein sources.

Nudged by supermarkets and the poultry industry, who had framed chicken as an affordable, accessible alternative, demand for fowl started to increase. To meet this growing demand, grocery store chain A&P held a competition in the 1940s aimed at developing a new breed that grew fatter, faster.

The contest resulted in a cross between two older breeds, the White Plymouth Rock chicken and the Red Cornish Hen, that now makes up roughly 90 per cent of the global poultry population.

“And, particularly over the last couple of decades, that have large breast yields because that’s what consumers are willing to pay for.”

That’s led to chickens that are so large and grow so quickly — some strains reach maturity in a month — that they have chronic mobility, cardiovascular system and muscular issues.

#Chicken made up 37 per cent of #global #meatproduction in 2017 — about 122 million tonnes. Last year, @ChickenDotCa produced about 771 million birds worth $2.8 billion. Most of these birds come from a single #breed: the Cornish Rock.

That’s where Torrey’s study, which was commissioned by Global Animal Partnership, a Texas-based animal welfare certification program, comes in.

Thus the obstacle course: One of the experiments forced the chickens to hop across a wooden beam to reach their food and water, to help the researchers evaluate how well they could move.

Still, the benefits of an industry-wide transition to slower-growing birds is far from simple.

“Widespread implementation, in Canada, of slower-growing birds would have a significant negative impact on the environment and affordability,” said Lisa Bishop-Spencer, director of brand and communications for the Chicken Farmers of Canada, an industry organization representing and regulating Canadian chicken farmers.

Converting a third of Canada’s flock to birds that take two weeks longer to grow — roughly 30 per cent more time compared to most chickens now — would require more than 668 million extra litres of water and about 213 million kilos of extra feed, she said.

The additional weeks of growth would also cost about $391 million a year she said, likely raising the price for consumers.

Yet even slower-growing chickens “would be a lot more efficient than other meat,” Torrey said.

As a follow-up to our announcement of the broiler chicken study, G.A.P. is publishing a series of blogs to help frame the issue and share insights from the data.

The equation between animal welfare, environmental impact and costs is particularly complicated in Canada, because of the poultry industry’s unique management regime.

Like dairy, Canada’s poultry industry is regulated under a supply management system that limits the number of chickens (and eggs) that Canadian farmers can produce and sets the price of chicken based on farmers’ costs of production.

Under the system, farmers need to purchase the right to raise a percentage of the total number of birds in the country — known as quota — and register with Chicken Farmers of Canada, which manages how much they can produce in concert with the federal government.

“Knowing who each of these farmers is allows us to implement very strict farm food safety, animal care, and sustainability programs,” Bishop-Spencer said.

“These programs are mandatory, they’re enforceable and they’re audit-able.”

That sets Canadian chicken farmers apart from regions where poultry isn’t supply managed, such as the U.S. and the E.U., Bishop-Spencer said.

Without a central governance body to enforce animal welfare standards and a resulting lack of limits on production, non-Canadian farms are motivated to grow birds as quickly and cheaply as possible. That’s not good for their welfare — or consumers.

But Canada is different.

“Supply management is really good, for not only food security, but food sovereignty in Canada,” Tina Widowski, a co-author with Torrey on the study, said.

That’s because it stabilizes the market, ensures a national standard and makes it profitable for smaller farmers to stay in business, she said.

In contrast, Canadian farmers who aren’t in supply-managed sectors, such as vegetable and grains, have seen their net incomes crash over the past 20 years, due to increased costs of production.

However, Widowski said it is a divisive practice. “People are against it,” Widowski explained, noting that some commentators argue it artificially increases the price of dairy, eggs and poultry.

“But we have control, and those are the industries that have been able to make changes in terms of animal welfare a lot more readily, because they have the income to do it,” she said.

And those changes might include raising slower-growing birds, Torrey and Widowski noted.

They’re both members of the expert panel that creates Canada’s chicken welfare standards — the National Farm Animal Care Council — and it’s likely their research will inform the next review of these standards.

But in the meantime, it will be up to farmers — and consumers — to decide how long their chickens grow. And the answer isn’t clear.

“It’s going to be a balance,” Widowski said.

“But in the grand scheme of things, we should point out that chicken meat is the most efficient compared to all other meat products, except for fish and eggs.”

Hate to introduce these

Hate to introduce these truths. Our food system in the west produces food that is too cheap. That results in, believe it or not, human obesity and poorer health outcomes. So "fast chicken" among other issues is not only bad for chickens but bad for humans. Just think about all the chicken based fast food, much of it in portion sizes unnecessary for the protein needs of humanity. Just think of the WASTE produced by selectively choosing only the white meat (subconscious racism?).

We know there is an epidemic of wasted food in affluent countries, despite the unpalatable fact that too many of our citizens go hungry in the midst of wretched excess. We know that the industrial food production and slaughtering complex produces river poisoning discharges of animal waste; that the demand for cattle and other protein farming land is destroying the Amazon forest and that other forests world wide are falling to the demand for the cheap fat of palm oil (produced under conditions of critical natural habitat destruction and abysmal labour exploitation) Cheap palm oil just adds to our epidemic of global obesity.

In effect, I generally agree with Canada's food production management systems. The opposition to them comes from that age old human drive to maximize individual profits. However it is indisputable that the farmers within the management systems are surviving better than those outside.

What our systems urgently require is re-thinking for the future. Growing demand for more humane farming methods and better, more humane slaughtering infrastructure; from transport through to the dismemberment assembly lines (so devastated by Covid 19) is a fact that cannot be ignored. The growth in the number of organizations campaigning for an end to animal exploitation and cruelty should be sufficient evidence.

The link between the industrialization of our food to the decline of human health and fitness is equally undeniable. Food revolution, food equity globally, is in the air. The food plutocrats should take notice. Global climate change will inevitably throw into disarray the too long, too fragile supply chains on which the industrial complex relies. NOW is the time to re-imagine our humanity, and our ability to sustain life.

And then there are the

And then there are the turkeys bred and raised so heavy and weak their legs can't support their own weight.
And then, one wonders about poultry feed made in part from poultry manure and poultry by-products ... why not: calves are fed milk substitutes made in part from bovine blood (because the cows have been bred for quantity milk production, and their milk doesn't come in till after the calves would have died -- at least that's what I was told by a dairyman at an agriculture exhibition. That was all before growth hormones and ractopamine in feed for animals raised for food.
There's a lot that's backwards and upside down in our food supply, all in the name of export "competitiveness."