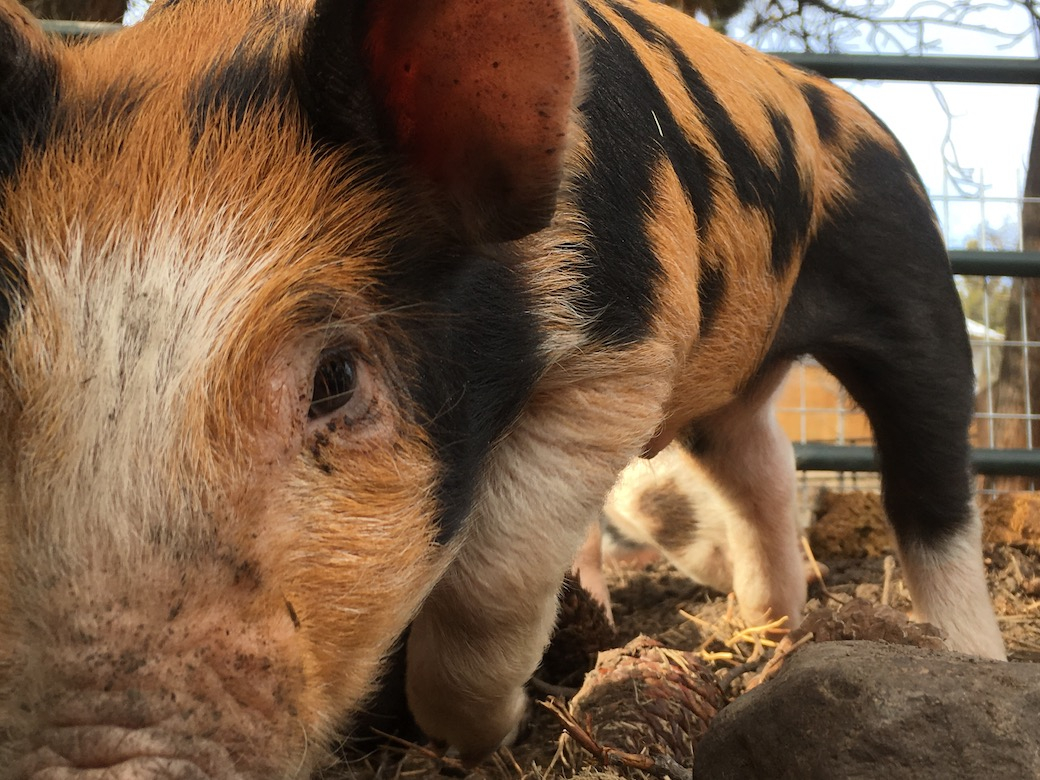 There are about 88,800 pigs in B.C. — enough to meet about a quarter of the provincial demand for pork. Photo by Tori Ball
Previous story
Next story

The path from pasture to plate for B.C.’s 22 million farm animals might soon get easier.

“Because it’s not going to be about imposing (a) rigid, one-size-fits-all approach to securing food safety.”

B.C.’s roughly 15,800 livestock and poultry farms make up almost half of the province's agricultural sector, worth $1.6 billion in 2018. About a third of these farms raise poultry, producing enough to far exceed provincial demand.

The remainder — about 9,100 farms — raise roughly half the cattle, pig, sheep, and bison eaten in B.C.

These farms vary significantly in size and location, from large chicken barns in the Lower Mainland to small ranches in rural or remote parts of the province, a diversity the proposed regulatory changes aim to accommodate.

They’ve also been increasingly busy since the pandemic started, with British Columbians seeking out more local meat thanks to “supply chain disruptions and the increased awareness of the importance of local meat,” the intentions paper notes.

Abattoirs in the province can currently be licensed under four classes (excluding federal licensing, which is managed by the Canadian Food Inspection Agency) — A, B, D, and E. Each has specific restrictions on the number of animals that can be slaughtered, how they can be processed, and where they can be sold.

“A” and “B” licences designate larger abattoirs; they require that a provincial meat inspector be present for all slaughters, but do not have restrictions on how many animals can be slaughtered or where they can be sold in the province.

“#Ecologically as well as in our #economies — as well as any business model — when you have a #diversified approach, when you have distributed capacity, it’s going to serve us all much better in the long term,” @AbraBrynne said.#bcpoli#localfood

“D” and “E” licences, in contrast, allow on-farm slaughter for a limited number of animals — with no inspector present — and constrain meat sales to the farm’s regional district.

The proposed changes would increase the amount of meat class “D” and “E” licence-holders could process annually, and expand the criteria of where their meat could be sold.

They would also expand provincial meat inspectors’ ability to oversee on-farm slaughter by transferring all oversight authority to the Ministry of Agriculture, increasing the frequency of inspectors’ visits, and moving some elements of the inspection process online. (Until Dec. 1, oversight for class “D” and “E” licences is being handled by the regional health authority.)

Additionally, the new regulations would increase training opportunities for people seeking to slaughter on-farm, update the code of practice that class “D” and “E” facilities must follow, and review new and existing regulations to minimize the risk of food-borne illnesses.

If they’re eventually legislated, Brynne said these could mark an important step for more sustainable food in rural B.C. by increasing the diversity and geographic distribution of abattoir and meat processing capacity.

“Ecologically as well as in our economies — as well as any business model — when you have a diversified approach, when you have distributed capacity, it’s going to serve us all much better in the long term,” she said.

B.C.’s Ministry of Agriculture is accepting public comments on the intended changes until Oct. 19.

These abattoirs were removed

These abattoirs were removed to support the big ones. We did not like it then as it put the small farmers at a disadvantage. The big abattoirs were not as clean or as humane. Please reinstate smaller local abattoirs so our food source is closer, cleaner and more humane

Another good idea from an

Another good idea from an \NDP government, and long overdue. We should talk this up and share widely, because from what I know...........Alberta could use a version of this plan. I'm not a farmer, but going from 17 abattoirs, dispersed around the province, to I think 2, both of them Mega and Foreign corporations....hasn't benefited the producers.

Globalizing everything, opening everything to big business.......makes billionaires income rise like rockets. It does very little to provide the local food security we need. Time to admit we took the wrong road out of our own prosperous communities into a come from away poverty for all but the very rich.

And our children eat worse for all our labour saving devices.

One thing REALLY gets my goat

One thing REALLY gets my goat (no pun intended, lol) when it comes to meat: it is often treated as a necessity - the intro for this particular article for example, says having more local meat available will increase the province's "food security". MEAT IS A LUXURY ITEM!!! It may be a staple in the diet of many, but it is by no means necessary for the sustaining of life and good health. The healthiest folks i know, are vegetarians: i'm not saying that everyone should switch from being omnivores to being veggies but seriously: a lack of animal flesh in one's diet is not a biggie: "Food security" should be a term applied only to essentials - veggies, grains, fruits, etc.