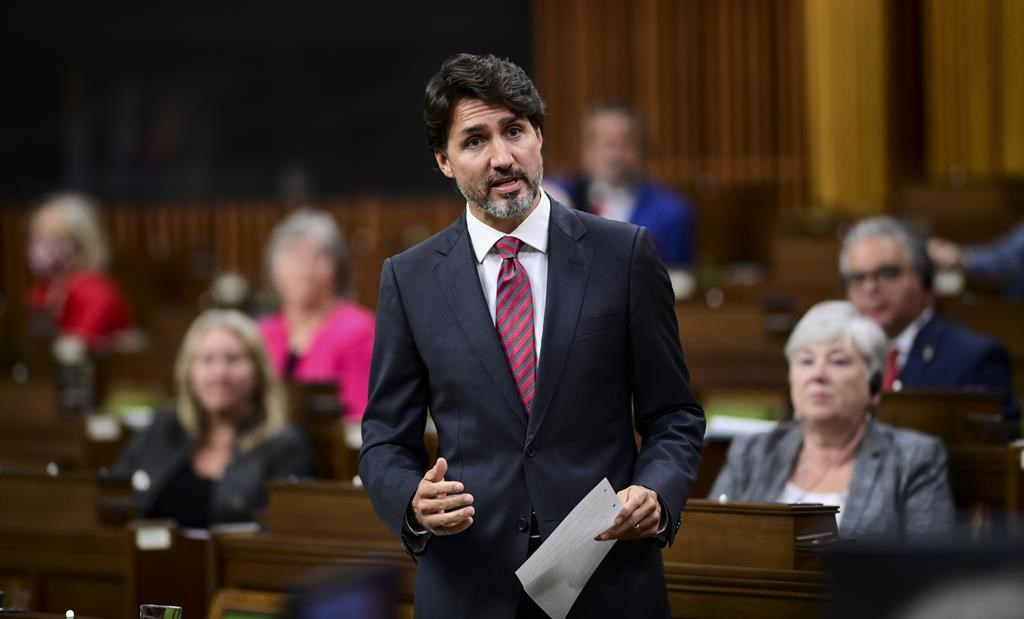 Prime Minister Justin Trudeau stands during question period in the House of Commons on Parliament Hill in Ottawa on Thursday, Sept. 24, 2020. Photo by The Canadian Press/Sean Kilpatrick
Previous story
Next story

Trudeau is expected to have an announcement about his government's ongoing efforts to protect Canadians and combat the potentially deadly novel coronavirus that causes COVID-19.

But he's also expected to start joining chief public health officer Dr. Theresa Tam and her deputy, Howard Njoo, more regularly at their daily briefings -- a sign of how serious the second wave of COVID-19 has already become.

During the first wave last spring, Trudeau held daily news conferences outside his home, Rideau Cottage, but those tailed off and finally stopped as the pandemic went into a bit of a lull over the summer.

The coronavirus is now back, with caseloads spiking dramatically in the four largest provinces over the past few weeks.

In a televised address Wednesday, Trudeau warned Canada is "on the brink of a fall that could be much worse than the spring," when the country went into a nation-wide lockdown to curb the spread of COVID-19.

Trudeau's government, meanwhile, is reverting to a practice used throughout the pandemic last spring to urgently fast-track emergency aid legislation through Parliament.

The government introduced Thursday legislation aimed at producing a more generous, flexible employment insurance system, along with the creation of three new temporary benefits to help those who've lost their jobs or had their hours drastically reduced due to the pandemic.

The new benefits will also apply to those who are forced to take time off work because they are ill, forced to self-isolate or stay home to care for a dependent who is ill or in isolation.

The new regime ensures benefits of $500 a week -- the same as the Canada Emergency Response Benefit (or CERB), which comes to an end Saturday.

The minority Liberal government had originally proposed payments of only $400 per week but upped the amount Thursday in an apparent bid to ensure NDP support for the throne speech.

The NDP had demanded that no one wind up getting less under the new regime than they were getting through the CERB, as well as a guarantee of paid sick leave.

The government is still negotiating details of the sick leave benefit with New Democrats but NDP Leader Jagmeet Singh said Thursday he was optimistic they could be worked out to his satisfaction.

The next question becomes how quickly the government can get the bill through Parliament. Monday and Tuesday have been set aside for debating the bill in the House of Commons and the government is negotiating behind the scenes with opposition parties to win agreement to pass it swiftly.

Unanimous consent would be required to speed the bill through all legislative stages in a single day -- as was done for previous emergency aid bills. But the government could still get it through within a matter of days with the support of at least one of the opposition parties.

NDP support will likely prove crucial, both to getting the bill passed quickly and to the government's ability to survive the eventual confidence vote on the throne speech.

The Conservatives have already said they'll vote against the throne speech and the Bloc Quebecois will follow suit if Trudeau doesn't immediately accede to their demand for a $28-billion infusion into the annual health transfer payment to the provinces.

Without the support of at least one of the main opposition parties, Trudeau's minority Liberal government will face defeat on the confidence vote, which could plunge the country into an election.