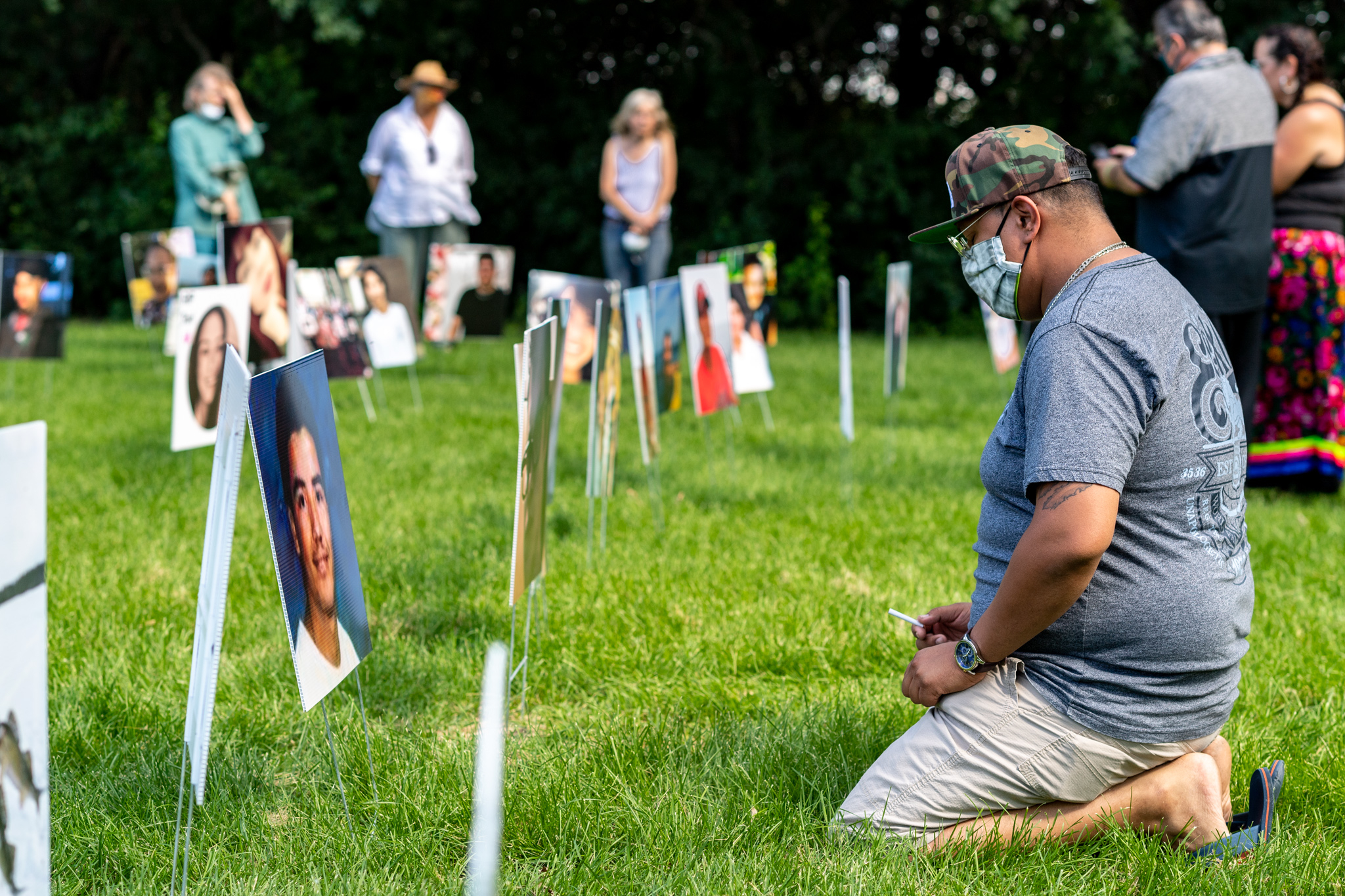 A grieving man in Regina makes a tobacco offering as he looks at photos of northerners who took their own lives. Photo by Brandon White
Previous story
Next story

The governments of Canada and Saskatchewan signed a letter of commitment with the Federation of Sovereign Indigenous Nations (FSIN) on Thursday promising to address death by suicide among Indigenous youth as a priority.

“Suicide is a tragedy that we see far too often,” Miller said.

“Through this joint commitment, we … (will) work together to address the crisis of suicide among First Nation peoples in Saskatchewan, particularly among children and youth.”

Miller said it is essential that all jurisdictions work together on improving delivery of culturally appropriate mental wellness supports, effective interventions that respect Indigenous perspectives, and guidance.

Miller also stressed the importance of promoting a better understanding about suicide, and supporting families, friends and communities that have been affected by the issue.

“We are committed to working with our many partners on these pressing matters and continue to invest in programs and initiatives to help our First Nations people and all residents who need support across Saskatchewan.”

This work will be shaped by the FSIN's suicide prevention strategy, Saskatchewan’s Pillars for Life Suicide Prevention Plan, and the First Nations Mental Wellness Continuum Framework.

“Through this joint commitment, we … (will) work together to address the crisis of suicide among First Nation peoples in Saskatchewan, particularly among children and youth," Marc Miller. @Min_IndServ @SKGov @fsinations

“This agreement is about creating hope: hope for the front-line workers struggling to find resources to help young people heal from depression and trauma; hope for parents wanting opportunities for their children to succeed; and hope for young people needing mental health resources, access to ceremony and cultural camps,” Pratt said.

“And in the next 60 days, this agreement will move from hope to action for our communities; from short-term reactionary measures to long-term sustained solutions.”

“First Nations youth are facing a mental health crisis and all levels of government must be committed to addressing the situation,” FSIN Chief Bobby Cameron said.

“Working together, we can surpass our goal of reducing youth rates to the same as non-First Nations until the rate is the lowest in Canada,” Cameron said.

“We will address suicide from a holistic perspective that draws upon what we know works for our people, which includes strengthening our identity and connection to our cultures, reconnecting with our elders, knowledge keepers and the land.”

The commitment comes after Métis musician and suicide prevention advocate Tristen Durocher and a group of supporters walked more than 600 kilometres from the Anglican cemetery on the Lac La Ronge Indian Band’s Fairchild reserve in northern Saskatchewan to the provincial legislature in Regina.

Once there, Durocher set up a tipi across from the government building, and fasted for 44 days, demanding a legislated solution to the high rates of suicide in the province, especially among northern Indigenous people.

Earlier this year, Cumberland NDP MLA Doyle Vermette put forward a bill that was unanimously rejected by Saskatchewan Party members in the legislature and didn’t pass. The FSIN said it is working on a bill of its own, while the Saskatchewan government maintained its commitment to its prevention plan.

Durocher broke his fast on Sept. 13 and is back in northern Saskatchewan.

Not wanting to sound like a “negative Nelly,” Durocher called the commitment a “meaningful step forward” in an interview with Canada’s National Observer on Thursday.

But he said he’ll believe it when he sees it.

“I hope it’s useful and I don’t want to criticize it, but again … the journey is a long one and it’s one that demands our leaders entrusted with the responsibility of public health (act quickly).”

'Stronger than I am:’ The wedge issue that shouldn't have been

it is all just words till

it is all just words till money and people are committed to it. SHAME on the saskatchewan party. WHERE IS THEIR PLAN