Sherlock Holmes has a rival, while VIFF has Toronto drug crime and Jimmy Carter’s musical friends 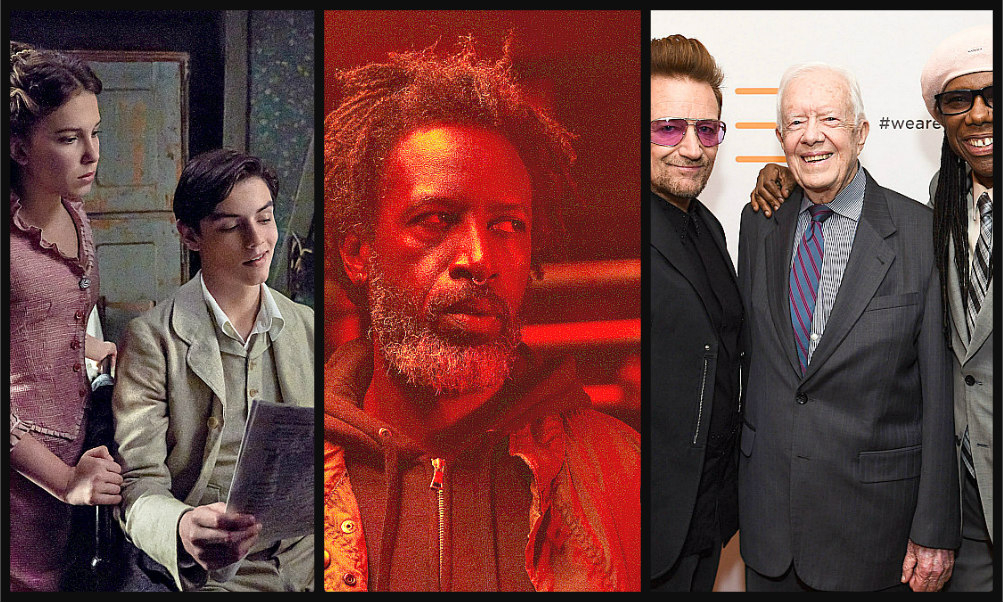 Also a sketchy bio of Nikola Tesla, a poignant workplace drama, and some brutal revenge filmed in Canada.
Previous story
Next story

The Vancouver International Film Festival has just announced an addition. It’s the closing film and apparently only available to stream on the last day, Oct. 7. It’s called Delete History and is said to be an “uproarious satire” about our obsession with technology. Or, as the notes put it, “the dysfunctional digital age we’re living in.” It’s from France and won a big award in Berlin.

Meanwhile, I’ve got a few more VIFF reviews today, after those I posted two days ago. I’ll have more on Tuesday and a look at some other new films out right now.

ENOLA HOLMES: Here’s a treat for these drab times and not at all the gimmick you might suspect at first glance. Enola is the younger sister of Sherlock Holmes and quite a sleuth herself in a series of young adult novels that I hadn’t heard of before by Nancy Springer. Enola (played with endearing spunk and charm by Millie Bobby Brown) is a very modern young woman for the time: no corsets for her. She’s trained to be independent by her mother (Helena Bonham Carter), who inadvertently kick-starts this story by disappearing. Enola goes to find her and on a train ride meets young Lord Tewkesbury (Louis Partridge), a runaway. So now there are two people who have to be found.

All of London, including Sherlock (Henry Cavill, looking like the Superman he has also been) and his fastidious brother Mycroft (Sam Claflin) are looking for the young lord. Enola gets the better of them because she has met him and knows more. She also gets wind of her mother’s participation in the women’s suffrage movement. The script deftly balances family and political movements with rumours of conspiracy theories in this bright and entertaining movie. A couple of British TV veterans are responsible, Jack Thorne for the script and Harry Bradbeer for direction. His work includes episodes of the series Fleabag. (Netflix) 3½ out of 5

AKILLA’S ESCAPE: For many he’s under the radar, but Charles Officer is one of our most accomplished filmmakers in Canada. He’s back with a dramatic feature, 12 years after his first one and a lot of TV, documentary and acting work in between. This one puts a nifty modern spin on a familiar genre: the drug gangster crime thriller. It’s absolutely up to date, set mostly in Toronto, but also in New York, as cannabis has become legal. But there’s a “firestorm” developing over it. Violence is increasing and Akilla Brown is ready to get out, but a complex history gets in the way. The film tells it with realism and nuance.

Akilla was trained in crime by a father who was on the run from political turmoil in Jamaica. (Officer is half Jamaican, though born in Toronto). “You have to decide which side you serve,” dad tells him in one of many flashbacks and is described as “the product of people torn apart by poverty and political violence.” The script subtly explains itself. The son became a drug courier, intercedes in a robbery at a dispensary and is ordered to retrieve the cash and “the inventory” that was stolen. He’s also trying to protect a young hood he rescues from the gang because the boy seems to be on the same track that took him into crime. The same actor (Thamela Mpumlwana) plays the kid and, in flashback, the young Akilla, thereby underlining the connection. Rapper and actor Saul Williams is compelling as the adult Akilla. The film is taut and tightly edited. And recommended. (Streaming by VIFF) 3½ out of 5

JIMMY CARTER: ROCK & ROLL PRESIDENT: Here’s a nice break from the usual seriousness of the festival’s films. Although there’s a strong reason here to also think about another president, you know the guy currently in power, Trump will never get an admiring portrait like this. Jimmy Carter’s story is told almost entirely through one sliver of his life, his love of music and his association with the people who make it. Carter talks and a few political types and a lot of stars talk about him, including Paul Simon, Bono and Nile Rogers, Roseanne Cash, Garth Brooks and most remarkably Bob Dylan. Yes, he appears several times to praise him.

Carter was friends with Willie Nelson and the Allman Brothers and is seen singing with Dizzy Gillespie. We see Aretha Franklin, Bonnie Bramlett, Mahalia Jackson, Jimmy Buffett and many more performing at the White House or at his election rallies. He loved music, and the artists responded because, as Bono says it, he was “the first world leader who knew all the words on my generation’s telegraph.” The Shah of Iran, the hostage drama and Ronald Reagan ended that, but Mary Wharton’s zippy documentary does a very good job of recalling and portraying him as a decent man. (VIFF CONNECT streaming) 4 out of 5

THE LAST SHIFT: Here’s a small and low-key film that feels absolutely contemporary and manages to explore more big themes than most. It’s set in a small-town Michigan fast-food joint where drive-thru customers come for chicken and fish sandwiches. Richard Jenkins plays the night manager about to retire after more than 38 years. Shane Paul McGhie plays a young man just out of prison, on parole and bristling under the rules imposed on him. All he did was deface a city monument.

The two compare their world views, trade attitudes, occasionally argue, and, in small ways, influence each other through this well-written and well-acted slice of life. Jenkins is proud of his work. “There’s an art to this shift,” he says. “At $9 an hour?” the young man counters and rails about the corporate bosses who exploit them. He also accuses Jenkins of profiting from his white advantage, but withdraws that when challenged. At home, he’s an absent dad and in his past wrote political commentary for a school newspaper. His radical analysis doesn’t move Jenkins, though, except to recall a regretful incident from his past. There’s no resolution, just a temporary meet-up by two men of different generations and ideas. Like real life. (Fifth Avenue and Cineplex Coquitlam) 3½ out of 5

TESLA: No not the car; the man who gave his name to it; the inventor and electricity theorist who fought Thomas Edison with his ideas, and won with some of them. This is not a biography as such, but a sort of mosaic of scenes about him. I didn’t find it all that enlightening, though, because there’s a lot missing and important matters not explained.

I’m usually in favour of imagination, but this film suffers from too much; it hampers the storytelling. I will admit it is bizarre enough to make the film quite fascinating. It has a character in the late 1880s sitting at a table with her laptop telling us to Google Tesla to see what we can find. She’s a part-time narrator for the film, the daughter of the banker J.P. Morgan, who for a time backed Tesla the inventor, and maybe (hinted only) was something of a love interest. She’s played by Eve Hewson opposite Ethan Hawke playing Tesla as introverted as he was known to be. The biggest head scratcher is when Tesla steps to a microphone and sings Everybody Wants to Rule the World many years before the Tears for Fears hit. Kyle MacLachlan is Edison and Jim Gaffigan is George Westinghouse in the battle over direct or alternating current. Tesla’s ideas won, and the film goes on to omit major insights, but does show him overreaching history by imagining something like today’s internet. And his meeting with Sarah Bernhardt is surely fanciful. (Available video on demand) 2½ out of 5

VIOLATION: Film festivals often bring us the grunge, not just the award winners and the art. Toronto calls it Midnight Madness, but there’s no late-night confinement when everything is streaming any time. All that is to say: Be careful with this one. It does a very good job of depicting betrayal as felt by one young woman, and then an even better job of depicting revenge. It builds simmering resentment and hurt, and when it really gets up to speed, becomes intense. Oh, and there’s a bigger display of male nudity than we’re used to.

Madeleine Sims-Fewer plays the wronged woman. (She’s also the co-director and co-writer with Dusty Mancinelli. They’re Quebec filmmakers known for a number of artful shorts.) The woman is on a visit with her husband to her sister's (and her man) at a lakeside house. A tough story unfolds about taking advantage, seen by her as rape and as just an interlude by a man. “We got carried away,” he says. She doesn’t buy that and after some nicely crafted ironic talk scenes, pays him back in full. Flashbacks and visions splinter the film, probably to mirror her cracking disposition. There’s blood, frequent buzzing by insects, a wolf with a dead rabbit and a bleak landscape to deepen the mood. And recollections of a recurring dream to add a touch of higher meaning and regret to the mayhem. It’s a raw one. (Streams at VIFF CONNECT) 3 out of 5