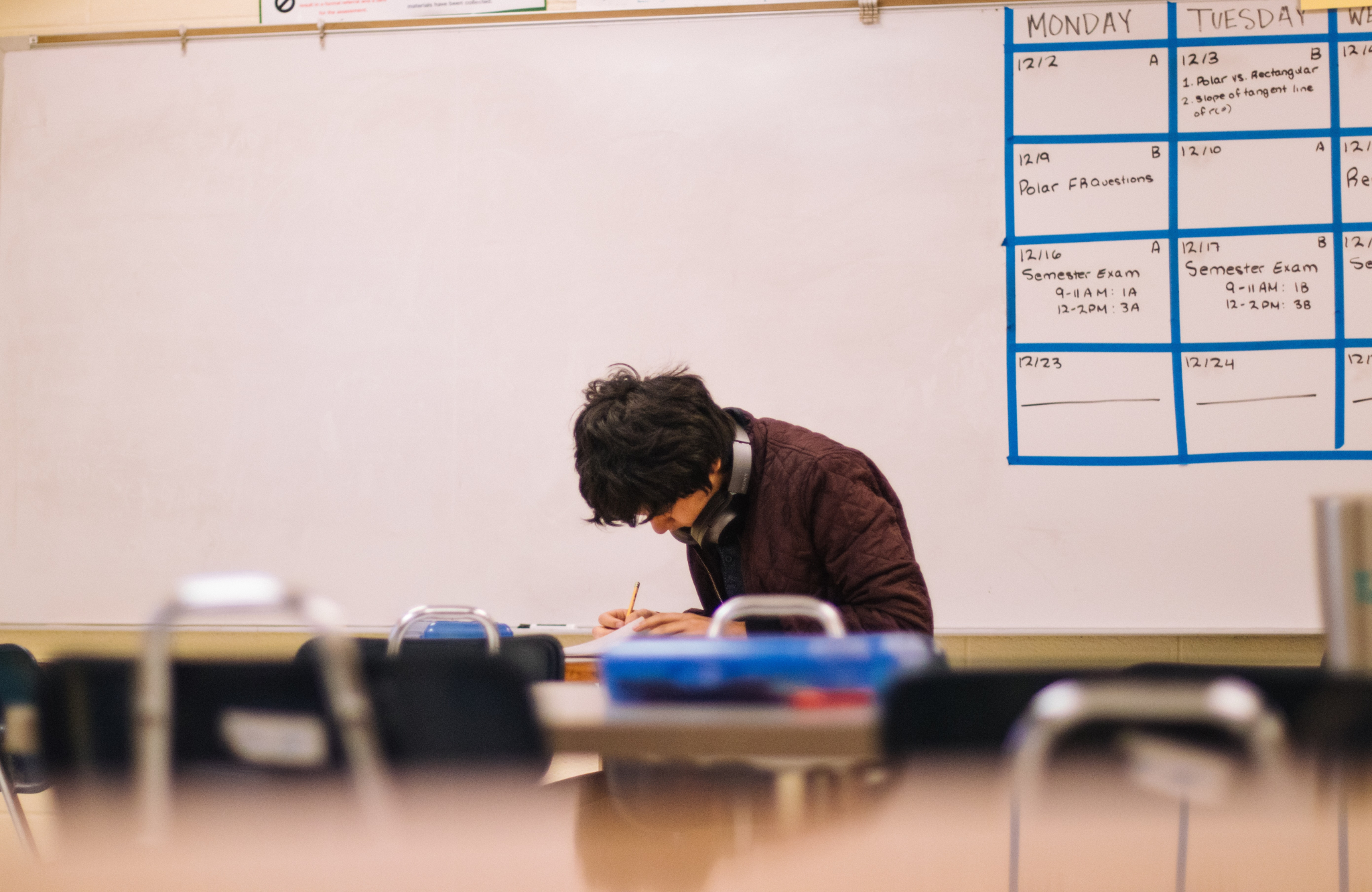 Academic misconduct has "skyrocketed" as more students are learning online thanks to COVID-19 campus closures. Today’s technology has made the business of cheating more sophisticated, and more profitable.
Previous story
Next story

Campus lockdowns triggered by the COVID-19 pandemic led exam halls across the country to go virtual last spring. At the University of British Columbia, math instructor Elyse Yeager and her colleagues were counting on about 1,000 first-year students to respect the honour system during their online finals.

What happened next is a snapshot of a problem educators are seeing exacerbated by the pandemic; one with privacy, legal and ethical implications that are shaping the way students cheat, and get caught.

“Within the first half-hour of the exam, basically every question was answered on Chegg,” said Yeager.

Chegg – a U.S. company which began as a textbook marketplace and now offers “24/7 homework help” – is one of the services emerging, with ostensibly greater prevalence than before, on the battlefront of academic integrity.

And professors are losing ground thanks to the virtual learning transition spurred by the pandemic.

“Schools and colleagues of mine have been reporting consistently, not only in Canada but across the globe, that academic misconduct has skyrocketed,” said Sarah Eaton, a University of Calgary associate professor, and editor at two academic integrity research journals.

But the opposite was true before the pandemic.

In fact, comparative studies in the last decade have shown that online courses experienced less cheating by students than those who took the same classes in-person, Eaton said. Virtual participants tended to be mature students aged 30-and-up who selected an online delivery method. Now, younger students are required to appear virtually before their professors who would rather teach in a lecture hall, fueling “resentment on both sides about having to be in an online environment when that’s not their preference,” she said.

Today’s technology has also made the business of cheating more sophisticated than it was a decade ago, and more profitable.

"Schools and colleagues of mine have been reporting consistently, not only in Canada but across the globe, that academic misconduct has skyrocketed,” said @DrSarahEaton of @ucalgary

Academic integrity researchers refer to these businesses, which sell anything from homework completion to stand-ins for exams, as “contract cheating companies.”

Even the most prestigious institutions are not immune.

Freedom of information requests filed by The Guardian revealed that cheating at top universities in the U.K., including Oxford and Cambridge, shot up 40 per cent between 2014 and 2017. The spike was attributed to essay mills and other contract cheating services.

Researchers are also seeing evidence of blackmail by these companies, which can threaten to report students to their schools should they end subscriptions or cancel their account payment cards, Eaton said.

She is aware, anecdotally, of administrators at the University of Calgary being contacted by such companies wanting to ‘out’ their former customers, the students. She declined to name the companies.

Australian researchers found that almost 90 per cent of students surveyed in a February 2020 study did not know about the risk of blackmail by these companies. The findings, published in the Studies in Higher Education journal, argue for creating a greater awareness of the blackmail issue among students and within academic integrity training. At the University of New South Wales in Australia, for example, the campus student organization encourages those targeted by blackmailers to come forward for assistance.

“There is a really dark side to this industry,” Eaton said. “The discourse, it’s like ripping a page out of a propaganda book…The marketing for these companies is highly predatory, highly seductive, and students don't always know what they’re getting into when they sign up for the services.”

"Please save me the trouble and confess"

Some companies assist academic institutions in their student misconduct investigations.

One of those companies is Chegg.

In its 2019 annual report, Chegg said it had 5.7 million paying customers and increased its service subscribers to a record 3.9 million – an almost 30 per cent increase from 2018.

Chegg saw its business nearly double after schools closed in response to the pandemic, according to a New York Times interview with CEO Dan Rosensweig in June.

The company has an honour code policy and may cooperate with cheating investigations if the request comes from a dean’s office or the institution’s academic integrity office.

“Firstly, while it is the unfortunate reality that many students can pay people to do their papers for them online or share test answers and papers on peer-to-peer platforms, Chegg does not support this,” said spokesperson Devonya Batiste, in an email. She added that requests must be made on official, signed letterhead to be considered “because we have to adhere to student privacy guidelines" and "we do not allow students to upload papers, get papers written for you etc. Batiste added that Chegg partners "with every single academic integrity investigation we receive from an official/correct university body".

At UBC last spring, math instructor Yeager said she collected hundreds of weblinks to exam responses on Chegg and turned them over to the dean’s office. She said Chegg eventually sent back user log information which contained personal data including IP addresses, emails and account names – though not necessarily real names – tracing back to 60 distinct users in the class.

In June, a physics professor at the University of Toronto tweeted that Chegg turned over account emails and user logs for students who were suspected of cheating on an exam, but not the names connected with the payment information for the account. The professor declined to be interviewed.

According to posts circulated on Reddit, another professor at the university took a more direct approach after he apparently discovered his undergraduate math exam appeared on Chegg.

“If you did use the service to cheat on the exam please save me the trouble and confess,” he wrote in what Reddit users said was an email to students, posted on at least two Reddit threads this spring. “Otherwise I promise I will do my best to see every single cheater expelled or at least never taking another math course again at U of T…Are you feeling lucky punks?”

(The professor did not respond to a request for comment. The university declined to comment on the background of the Reddit posts or on personnel matters.)

“Students proven to have used ‘solutions websites’ such as Chegg.com as an unauthorized aid on an assessment will be asked to meet with their instructor and Dean’s office to discuss their actions,” said Sandy Welsh, U of T Vice-Provost for students, in a statement.

She confirmed that the university has been in touch with the company over its practises.

“The University strongly discourages its students from sharing their instructors’ copyrighted teaching materials online, and prominent wording to this effect is repeated frequently to students,” Welsh said.

Copyright laws protect original creative works. “In Canada, the bar is lower than it is in the U.S., so most things that we write are presumed to have copyright,” said Saptarishi Bandopadhyay, an assistant professor at Osgoode Hall Law School.

One strategy for professors is to request takedowns of their exam questions, slide decks or other instructional materials from these websites based on copyright.

“Legally, it's probably more strategic for them to not exercise that much control over the forums,” said Bandopadhyay, who teaches courses in copyright law and intellectual property. “The more authority they can show…the easier it will be to hold them liable,” he said.

Some professors are taking a proactive approach.

Miriam Martin, an assistant professor of teaching at the University of California Davis, first discovered these services in the spring, and now sees them everywhere. It moved her to create a workshop to educate colleagues about these companies, how to not enable misconduct, and test and refine solutions for students.

“While technology is an important tool in the detection of misconduct, I am concerned that entering a high-tech arms race with students will expend resources and good will that would be better spent toward improving student motivation and efficacy as learners,” said Martin, a microbiology professor, in an email.

Getting to the root of why students cheat is important. She points to helping reduce student anxiety by creating multiple low-stakes assignments, in the place of a few high-stakes ones, offering live support during exams, and helping students feel motivated to succeed at an assignment by framing it in the context of how it could be relevant to their future career.

Back at the UBC math department, the question of what level of diligence is enough to protect the grading system in these times is on Yeager’s mind, she said, evoking Goodhart’s law, named after a British economist. The adage goes: “When a measure becomes a target, it ceases to be a good measure.”

Professors are likely to be wrestling with this now more than ever.

“Once grades become important, they stop being such a good measure specifically because people will try to optimize the grade as opposed to optimizing the learning,” Yeager said, “and then the grade and the learning are no longer coupled in the way that we would hope.”

My experience is that some

My experience is that some faculty are not much concerned with cheating and others are. My philosophy has been to set conditions so that cheating is very difficult, so that students fail rather than being caught. There are various tricks one can use. My favourite is to give the students assigned seats in the final exam, with no warning that this will happen. I arrange the students alphabetically in any way I choose, but in such a way that a student I suspect of cheating earlier sits in the front row. When the students come into the room they are asked to put coats, bags etc in the front of the room and use the diagram on the overhead to find their signature cards. This worked very efficiently. (A benefit is that a student does not know that he or she has been selected for the front row.) I know this method prevented copying by one pair of students, (they had identical term marks, but vastly different final exam marks and were caught copying in an organic chemistry exam). I had an empty chair in another exam and the most likely explanation is that the wrong person was going to write the exam, but chickened out with this arrangement.

Certainly an interesting technique for preventing in person cheating but it doesn’t address the issues brought up in the article. How would you tackle the use of online cheating services?