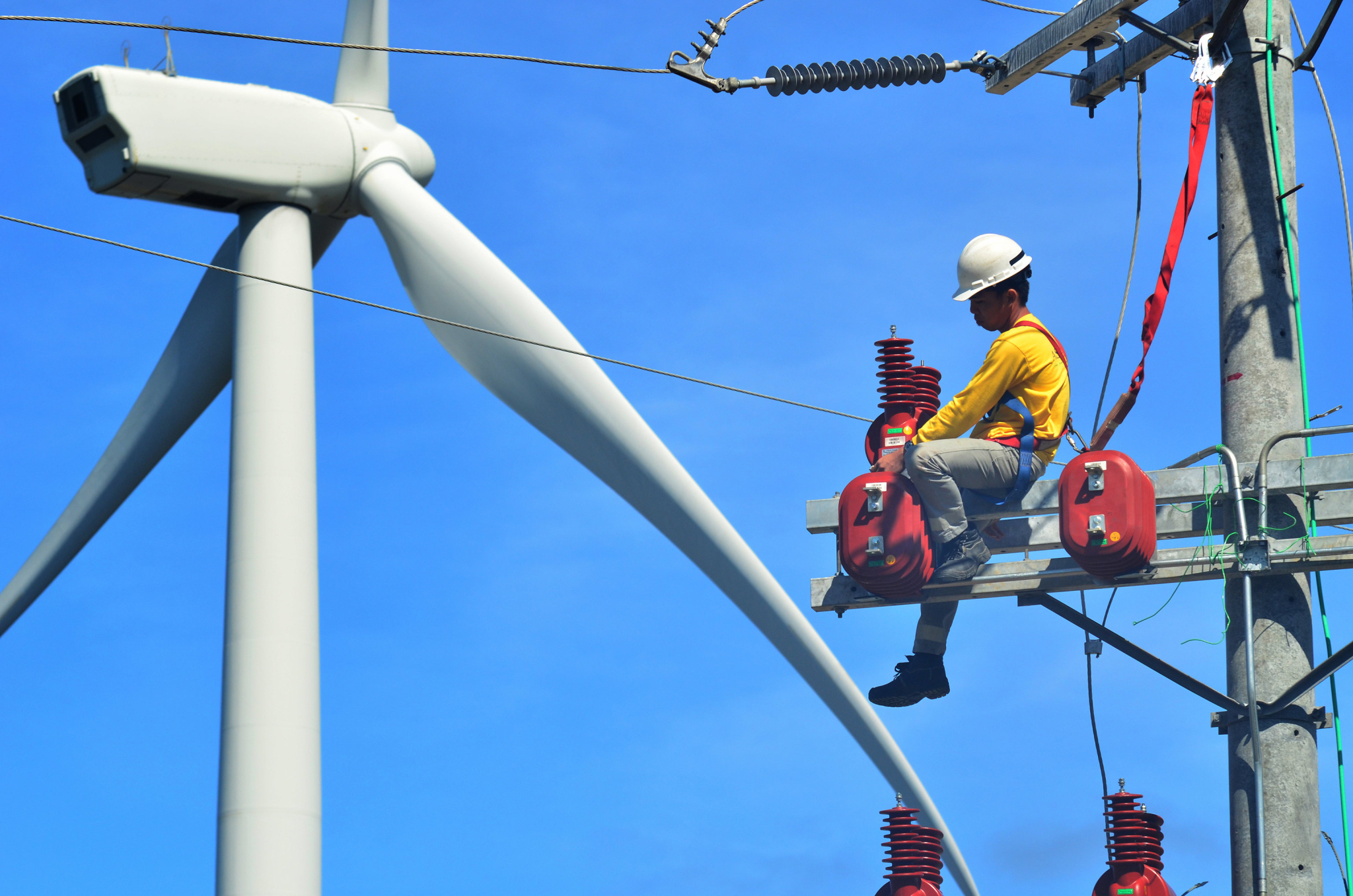 A technician repairs an electrical pole in Philippines in January 2019. It is one of the 10 countries with the largest slice of wind power jobs, according to IRENA. Canada didn't rank in that top 10. Photo by Asian Development Bank
Previous story
Next story

Canada has made the top 10 list of countries for the number of jobs in hydropower, but didn’t rank in three other key renewable energy technologies, according to new international figures.

Although Canada has only two per cent of the global workforce, it had one of the 10 largest slices of the world’s jobs in hydropower in 2019, says the Abu Dhabi-based International Renewable Energy Agency (IRENA).

But other clean tech advocates say there’s more to the story. When tallying clean energy jobs, it's worth a broader look, Clean Energy Canada argued, pointing to the recent Ford-Unifor deal that includes a $1.8-billion commitment to produce electric vehicles in Oakville, Ont.

Natural Resources Minister Seamus O'Regan’s office also pointed out the renewables employment figures from IRENA are proportional to global population. “While Canada's share of the global clean energy job market is in line with our population size, we produce almost 2.7 per cent of the world’s total primary renewable energy supply. As only 0.5 per cent of the global population, we punch above our weight,” said O'Regan's press secretary, Ian Cameron.

Canada joined IRENA in January 2019 and the country has been described by the association as an “important market” for renewables over the long term.

On Thursday, Prime Minister Justin Trudeau announced a new $10-billion “Growth Plan” to be run by the Canada Infrastructure Bank that would include “$2.5 billion for clean power to support renewable generation and storage and to transmit clean electricity between provinces, territories, and regions, including to northern and Indigenous communities.” The infrastructure bank's plan is expected to create 60,000 jobs, the government said.

A powerful renewables sector is not just about job creation. It is also imperative if we are to meet global climate objectives, according to the Intergovernmental Panel on Climate Change. Renewable energy sources have to make up at least a 63 per cent share of the global electricity market by mid-century to battle the more extreme effects of climate change, it said.

Canada is in the #top10 for hydropower jobs, but didn’t rank in three other key renewables, according to new @IRENA figures. @BCSEA says Canada needs to move faster, while @cleanenergycan says tallying clean energy jobs is worth a broader look.

“The IRENA report shows that people all over of the world are building the renewable energy revolution now,” said Tom Hackney, policy adviser for the BC Sustainable Energy Association.

“Many people in Canada are doing so, too. But we need to move faster to minimize climate change. For example, at the level of trade policy, a great idea would be to develop low-carbon trading blocs that put tariffs on goods with high embodied carbon emissions.”

In Canada, 82 per cent of the electricity grid is already non-emitting, noted Sarah Petrevan, policy director for Clean Energy Canada.

With the federal government committing to a 90 per cent non-emitting grid by 2030, said Petrevan, more wind and solar deployment can be expected, especially in the Prairies where renewables are needed to help with Canada’s coal-fired power plant phase out.

One example of renewables in the Prairies is the Travers Solar project, which is expected to be constructed in Alberta through 2021, and is being touted as “Canada's largest solar farm.”

But renewables are only “one part of the broader clean energy sector,” said Petrevan. Clean Energy Canada has calculated clean tech supports around 300,000 jobs, and those are projected to grow to half a million by 2030.

“We’re talking about a transition of our energy system in every sense — not just in the power we produce. So while the IRENA figures provide global context, they reflect only a portion of both our current reality and the opportunity for Canada,” she said.

The organization’s research has shown that manufacturing of electric vehicles would be one of the fastest-growing job creators over the next decade. Putting a punctuation mark on that is a recent $1.8-billion deal with Ford Motor Company of Canada to produce five models of electric vehicles in Oakville, Ont.

With 4.3 million renewable energy jobs in 2019, or 38 per cent of all renewables jobs, China “remains the clear leader in renewable energy employment worldwide,” the IRENA report states. China has the world's largest population and the second-largest GDP.

The country is also by far the world’s largest emitter of carbon pollution, at 28 per cent of global greenhouse gas emissions, and has significant fossil fuel interests. Chinese President Xi Jinping called for a “green revolution” last month, and pledged to “achieve carbon neutrality before 2060.”

China holds the largest proportion of jobs in hydropower, with 29 per cent of all jobs, followed by India at 19 per cent, Brazil at 11 per cent and Pakistan at five per cent, said IRENA.

Canada, with 32,359 jobs in the industry, and Turkey and Colombia hold two per cent each of the world’s hydropower jobs, while Myanmar and Russia hold three per cent each and Vietnam has four per cent.

China also dominates the global solar PV workforce, with 59 per cent of all jobs, followed by Japan, the United States, India, Bangladesh, Vietnam, Malaysia, Brazil, Germany and the Philippines. There are 4,261 jobs in solar PV in Canada, IRENA calculated, out of a global workforce of 3.8 million jobs.

In wind power, China again leads, with 44 per cent of all jobs. Germany, the United States and India come after, with the United Kingdom, Denmark, Mexico, Spain, the Philippines and Brazil following suit. Canada has 6,527 jobs in wind power out of 1.17 million worldwide.

As for liquid biofuels, Brazil leads that industry, with 34 per cent of all jobs. Indonesia, the United States, Colombia, Thailand, Malaysia, China, Poland, Romania and the Philippines fill out the top 10. There are 17,691 jobs in Canada in liquid biofuels.

all well and good to tout

all well and good to tout jobs created ---better building wind turbines than destroying eco systems with tar and fracking--but reducing our need for energy through high efficiencey, passive housing and retrofitting buildings (glass towers in Toronto anyone?) is a huge untapped deal too.
How will Hydro Ontario react if every home and business reduces the draw on hydro by 30%--down go their profits. So programs to install solar panels were quietly dropped when they were instantly fully subscribed to under the Liberals. Τhen we got Doug and the Destroyers nixing 287 green projects within a few months of coming to power.? $3B to buy three gas plants rather than cheap hydro from Quebec .........
not holding my breath here---been waiting 40 years for sense to prevail

You're right--and the utilities are doing short term thinking. Sure, if we get efficient we'll need less energy . . . but if lots of stuff currently using fossil fuels goes electric, like transit, heating, some industrial processes, cars, there'll still be plenty need for electricity, so they should chill.
Although come to that, utilities should be public and not run for profit but for the public good.

By far the best anti-GHG

By far the best anti-GHG strategy is to shut down methane usage. It's worse than coal, if even 3% of it leaks on the whole journey from field to furnace.

Electric heat pumps can now replace gas heating, affordably. The First Nations band at Skidegate has done so, as told here in the NO.

That project is of a piece with better insulation, better windows, better draft-plugging. There's no sense spending $5K-$15K on a heat pump (depends on climate) without spending a few (to several) grand on double and triple panes, and on sealant and insulation.

So, we should do all that - and also, will need more clean electricity to replace all those billions of watts of gas furnaces with.

And then there's electric vehicles. Enough to motor all of BC would neatly suck up every watt you could get from Site C. Yes, environmental cost there, too, but take your choice. Northern, cloudy BC is a bad place for solar, not the greatest for wind, either, save offshore of the west side of the Island.

So I wouldn't put hydro in the doghouse just yet.