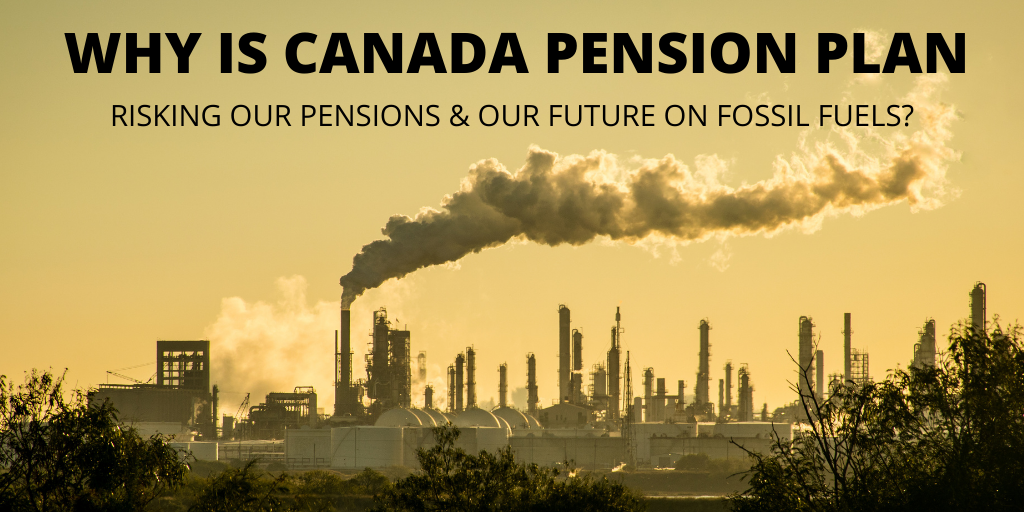 Recent analyses of CPP’s investments in oil, gas and coal raise red flags about the fund’s alignment with Canada’s climate commitments and mandate to invest in the best interests of Canadians. Photo by Shift Action for Pension Wealth and Planet Health
Previous story
Next story

Last month, Mark Machin, CEO of the Canada Pension Plan (CPP), wrote that climate change is the crisis beyond COVID-19 that we can’t afford to ignore, stating that “the full effects will depend on the actions we take now and in the future.”

So why, then, is CPP pouring billions of our retirement savings into oil, gas and coal companies that are incompatible with a safe climate?

One such red flag is its ownership of Crestone Peak Resources, a Denver-based fracking company. Four former or current CPP employees who oversaw its purchase in 2016 now sit on Crestone’s board of directors or executive team.

The Globe and Mail reported that Crestone responded by donating more than US$600,000 to pro-fracking candidates and interest groups in Colorado’s 2018 state elections.

That’s right, a fracking company owned by our national pension appears to have spent money to influence elections in Colorado to block protections for the environment and public health.

CPP also spent at least €830 million through its Nephin Energy subsidiary buying gas interests off the coast of Ireland from Shell in 2018. While Shell offloaded its “involvement in the most controversial infrastructure project in the history of the [Irish] State,” CPP boasted that the Irish offshore gas will “deliver strong risk adjusted returns over the long-term time horizon of the CPP Fund.”

I wasn’t long before the new Irish coalition government committed to a ban on new licences for exploration and production of gas to fight climate change.

This is part of a disturbing pattern of CPP investments in high-risk, high-carbon projects uncovered by the Canada Climate Law Initiative.

In June 2020, Mr. Machin told the House of Commons Finance Committee that 2.8 per cent of CPP’s portfolio, or nearly $12 billion, was invested in fossil fuels. We even appear to hold $141 million in Chinese coal.

At a recent conference, Mr. Machin deflected by suggesting CPP invests only in companies committed to transition, but this simply isn’t accurate. None of these oil, gas or coal companies have credible plans to eliminate climate pollution as required.

And CPP’s fossil fuel investments aren’t just bad for our climate. They’re also bad for our retirement portfolio. Coal is collapsing, while oil and gas has been the worst-performing economic sector over the last decade in the S&P 500. COVID-19 has only accelerated the decline. BP’s latest long-term outlook assumes global oil demand will never recover.

In the 2020 fiscal year-end, the CPP Investment Board’s “Energy and Resources” portfolio dropped 23.4 per cent — the worst return of any asset group. In relative terms, CPP has been stable through the COVID-19 crisis, but how much better would it have performed without fossil fuels?

There is hope, as CPP doubled investments in renewable energy to nearly $6 billion in recent years. While significant, this only represents a tiny fraction of a $434 billion fund that claims “we need to advance action now.”

If CPP is serious about addressing this crisis and building a clean economy, it needs to put its money — our pensions — where its mouth is. That means screening out new investments in oil, gas and coal, removing fossil fuels from our portfolio by 2025, aligning our investment strategy with Canada’s Paris Agreement commitments, setting ambitious goals for increasing investment in profitable climate solutions, and playing an active role in building a zero-carbon economy in Canada.

Where is the national

Where is the national movement to publicly shame the CPP and demand their total divestment from fossils?

Also where is the national

Also where is the national movement for private investors to realign where their money goes. I've been trying for at least 5 years to find investments to replace the fossil fuel and its infrastructure in my teeny portfolio (putting my money where my mouth and beliefs are?)

My investment advisor insists there is nothing on the market that fits my portfolio profile ( too risky, no returns or value growth....)

It makes me wonder how the oil/gas sector generates dividends when by all accounts it cannot break even without massive government support? So, either it is a ponzi scheme, or its dividends are based on my own tax payments dribbling back to me?

What I propose is that the government start issuing bonds to raise money for green investments. The big money private sector seems incapable of doing so....

Maybe you need a new advisor.

Maybe you need a new advisor.
So when do the directors of the plan hold their meetings? Maybe they need to be picketted. I'm not sure which national public interest group could advance a petition and/or media campaign to force them to stop throwing away our pensions.
I thought they were supposed to invest our monies "prudently."
"Everybody knows" by now that coal and dilbit, especially, are losers, short term, medium term, and long term.

XR is leading a campaign to

XR is leading a campaign to stop RBC from investing in the tar sands : https://www.facebook.com/xr.quebec/photos/salispasmoncash-dontdirtymymon...

Some credit unions offer fossil fuel free GIC investments notably Desjardins in Quebec and Ontario, and Kindred in Ontario. Van City in BC also I believe. Maybe others I’m not aware of. GICs offer security but generally low interest rates. I believe you can also get them market-linked.

Business interests complain that when we increase Canada Pension Plan premiums, we remove money from the economy and decrease employment. If so, then why are CPP investments not also creating jobs to replace those lost? Is it possible that these retirement funds are distorting capital markets and causing asset bubbles rather than real economic activity?

1. Pension Funds Are So Big They'll Create A Bubble In Any Market ...
http://www.businessinsider.com/pension-fund-bubble-creators-2010-9

"To conclude, pension funds are so large that they will bubble-up any financial market they are allowed to enter—and what goes up must come down. The problem really is that what Hyman Minsky called managed money (including pension funds, sovereign wealth funds, university endowments, money market funds, etc), taken as a whole, is simply too large to be supported by the nation's ability to produce output and income necessary to provide a foundation for the financial assets and debts that exist."

It’s not just CPP that is

It’s not just CPP that is invested in fossil fuels. Most Canadian equity mutual funds (unless they are designated “SRI”, socially responsible investments”) hold the same “dirty” stocks. Therefore almost all of Canadians’ private retirement savings and employer pension plans are tainted with the same hypocrisy if we espouse shifting to a green economy.

At least as individuals we

At least as individuals we can direct our investments to SRI funds and other financial instruments. I am quite disgusted with the CPP investing in greenhouse gas industries. A few universities endowment funds are now divesting from fossil fuels. Guelph is one.

Boy, this story is timely.

Boy, this story is timely. Not only do Canadians invest (sometimes unknowingly) in fossils, but Canadians through unions and orgs such as Public Service Alliance of Canada and RCMP invest millions in pension monies in for-profit LTC homes.
Yes, Canadians’ pension funds are invested into Revera and other for profit nursing homes.
So, we are complicit in the Covid-related horrors and deaths of our elderly that have occurred in these facilities. How many knew?
I hope that National Observer will do this needed story.
How much $ have Canadians contributed? What profits have gone back to shareholders while elderly people died?
Thanks for the environmental story.
Now please do the horrific story of how our money has resulted in the abuse and deaths of seniors.