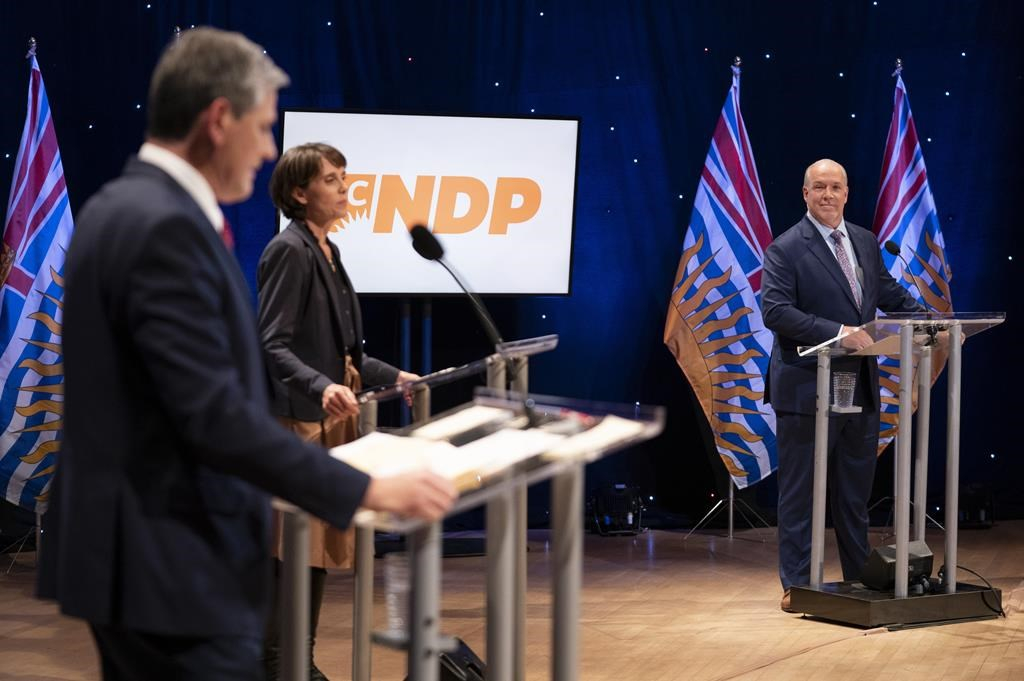 VANCOUVER — NDP Leader John Horgan is trying to clarify an answer he gave on white privilege during Tuesday night’s leaders debate in the B.C. election.

In a statement issued on Twitter, Horgan says he wished he had given a different answer when the three party leaders were asked how they have reckoned with white privilege.

Horgan answered by sharing his experience playing lacrosse as a youth, saying he doesn’t see colour.

The Green party’s Sonia Furstenau said she cannot comprehend that some mothers tell their children to be wary of the police.

But Horgan later revised his answer on Twitter, admitting it could have upset people.

“I was jolted out of my comfort last night and I’m going to reflect on that. I profoundly regret that I alienated and hurt people last night.”

The Coalition on Murdered and Missing Indigenous Women and Girls in B.C. has also sent a letter to the three party leaders expressing "grave concern" that safety of Indigenous people does not appear to be a priority for them.

The letter, signed by 18 people and groups, including the Union of B.C. Indian Chiefs, says none of the party platforms released so far offer plans to implement findings from the national inquiry into murdered and missing Indigenous women.

The New Democrat and Liberal parties have unveiled their platforms and Furstenau is slated to release her party’s policies and goals at an event in New Westminster later in the day.

In her answer on Tuesday night, Furstenau pledged to work to end systemic racism but admitted neither she nor the other two party leaders, who are all white, could ever grasp its nuances.

The letter from the coalition says the COVID−19 pandemic shows all levels of government can act quickly when failing to do so can be life−threatening.

"The negligence of government and its failure to act swiftly to implement the (findings) betrays a lack of value for the lives of Indigenous women," the letter says.

The letter urges each party to immediately release its plan to act on the findings and to respond to recommendations from the committee about how the plan will be implemented and funded.

This report by The Canadian Press was first published Oct. 14, 2020.