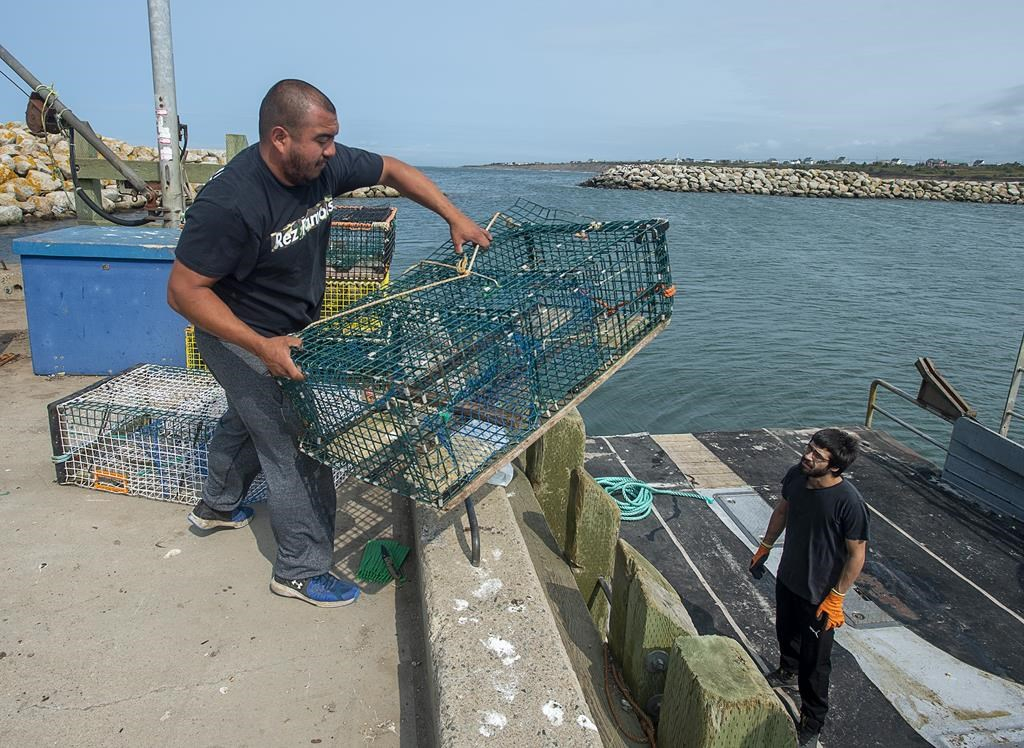 Members of the Sipekne'katik First Nation prepare to go fishing in Saulnierville, N.S., as it launches its own self-regulated fishery on Thursday, Sept. 17, 2020. THE CANADIAN PRESS/Andrew Vaughan
Previous story
Next story

HALIFAX — The chief of a Mi’kmaq First Nation says an angry group of non-Indigenous people damaged lobster pounds holding his people’s catch and burned a vehicle on Tuesday night.

Video being circulated on social media shows a van being set alight in West Pubnico, N.S., during one of the tense encounters.

Chief Mike Sack of Sipekne’katik First Nation says damage occurred at two locations, one in West Pubnico and the other in the Weymouth area, and lobster caught by the Indigenous fishers was removed from lobster pounds.

"Local fishermen attacked two lobster buying facilities and did a lot of damage, burned vehicles, took lobsters," Sack said in a telephone interview Wednesday. "Whatever they wanted to do, happened."

Sack said two Indigenous harvesters were at the lobster pound in West Pubnico when people broke a door, a van was burned and their catch was taken away.

"My reaction is, I can’t believe how they are getting away with these terrorist, hate crime acts and the police are there," he said.

"I called an emergency meeting with my council this morning, and we’re trying to figure out our next steps to figure out what we’re going to do to ensure our people’s safety."

The RCMP were present for some of the incident but did not have official comment Wednesday morning on what had occurred.

The Indigenous fishers are conducting a fishery outside of the federally regulated season based on a 1999 Supreme Court of Canada decision that ruled East Coast Indigenous groups have the right to fish for a "moderate livelihood," though a second ruling stated this was subject to federal regulation.

Since the Mi’kmaq fishery opened last month, there have been tensions on and off the water, with traps hauled from the sea by non-Indigenous harvesters and a boat belonging to a Mi’kmaq fisherman burned at a wharf.

Sack says he has contacted federal Fisheries Minister Bernadette Jordan about the growing strife as well as the national chief of the Assembly of First Nations.

The chief says the latest incidents began to unfold Tuesday evening as he was meeting with the 11 lobster harvesters his band has licensed for a moderate livelihood fishery in St. Marys Bay. Each of their boats uses about 50 traps in the inshore fishery, while commercial Indigenous and non-Indigenous fishers who operate beginning in late November use between 375 and 400 traps.

This report by The Canadian Press was first published Oct. 14, 2020.

If antifa shows up, it's

If antifa shows up, it's terrorism. If the right wing racists show up AND assault people and destroy property, it's just good old boys. These people should be facing riot police. They are NOT the law. They are breaking the law that I have to live by. Pick them all up and throw them in jail.

Would it be too much to

Would it be too much to expect the RCMP to actually do their job and serve and protect? enforce the law? Oh, silly me, I forgot the RCMP only enforce the "law" when the victims are white or corporate bullies - not First Nations. The RCMP has a BIG racism problem and their rural policing model has led to "turning a blind eye" until situations escalate to the point of tragic results (another case in point? the mass shooting tragedy early this year in NS where the perpetrator's penchant for building an arsenal of guns and fake police cars and domestic violence was an "open secret" but nothing was done to prevent that tragedy. Something like impersonating a police officer or illegal possession of prohibited weapons come to mind)

The RCMP spokesman needs to lose the condescending and patriarchal tone that we should "consider ourselves lucky we live in a country where we can comment on how the police do their job". Based upon what happened, they did NOTHING, which last time I checked is not in their job description. As for the commercial fisher-thugs who committed arson, theft and vandalized property. Why were they permitted to do that AND walk away? Why did the RCMP escort the 2 men inside of the facility out and leave it open season? Whereas when there are peaceful occupations of unceded FN lands that Big Oil want cleared out of the way for the boondoggle of a pipeline, the RCMP can somehow find the manpower to create military-style checkpoints and barricade? Colonialism is alive and well in Canada, especially in the RCMP. If they are not going to be trained to police these kinds of situations, then why even show up? This Canadian is truly disgusted with my tax dollars being wasted this way. Defund the RCMP should be a hashtag if it isn't already!

I must add that it's karma that the lobsters the thugs threw out on the pavement were from fellow commercial fishers - not Mikm'aw catches. Knowing what I do of the SouthWest Nova crew, I'm sure there'll be some rough justice for those idiots, even if the RCMP do nothing.