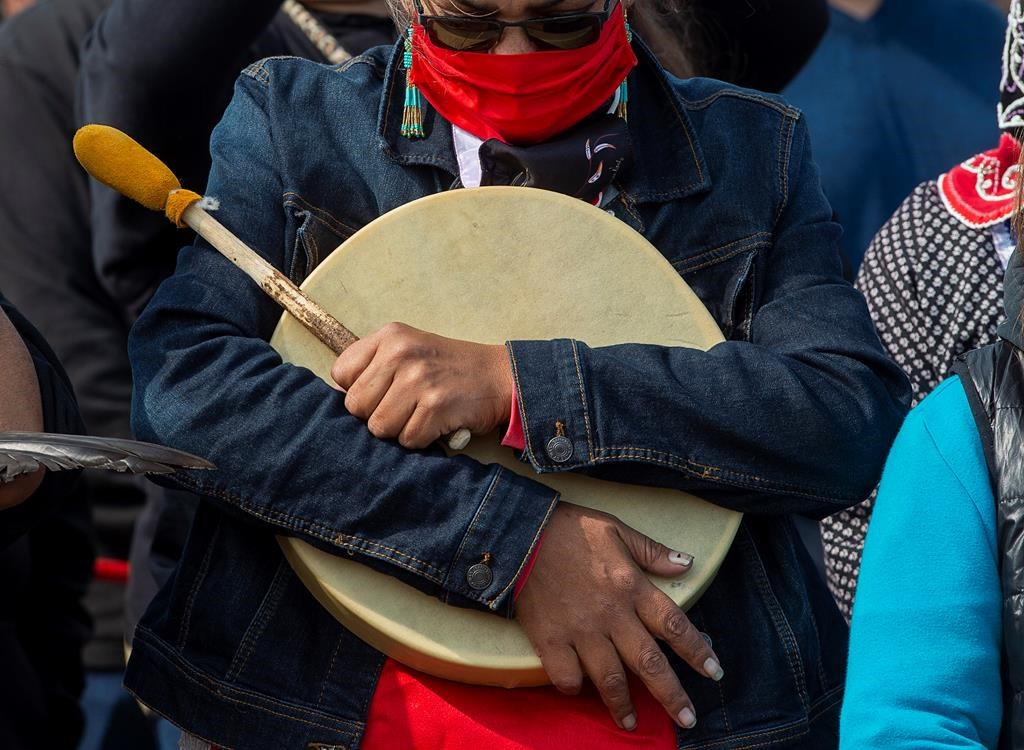 A Mi’kmaq drummer pauses during a prayer as members of the Sipekne'katik First Nation bless the fleet before it launches its own self-regulated fishery on the wharf in Saulnierville, N.S., on Sept. 17, 2020. File photo by The Canadian Press/Andrew Vaughan
Previous story
Next story

A Mi'kmaq chief says he's not satisfied with the federal government's response in the ongoing conflict between Indigenous and non-Indigenous fishermen in southwestern Nova Scotia.

Chief Michael Sack of the Sipekne'katik First Nation said in an interview Tuesday he wants the federal government to uphold treaty rights that protect Mi'kmaq fishermen and to prevent non-Indigenous fishers from interfering with their harvest.

"I'm not happy with it," Sack said in an interview Tuesday, regarding the weekend's events. "We could've lost lives. It was very rough down there."

The Mi'kmaq are trying to assert their treaty right to fish for a moderate livelihood around St. Marys Bay during the off-season — which runs from late May until late November. During the off-season, non-Indigenous fishermen give the crustaceans time to molt and to reproduce.

Sack says there is commercial fishing year-round across Nova Scotia and Indigenous fishermen have the right to fish when they want, where they want. He said the Mi'kmaq fishermen plan to roll out a buyer's license system on Thursday to open up avenues to sell their catch.

Sack attended a meeting with Fisheries Minister Bernadette Jordan, Indigenous Relations Minister Carolyn Bennett and with other chiefs on Monday, during which they discussed the ongoing dispute.

Following the meeting, the two ministers released a statement affirming that the Mi'kmaq have a constitutionally protected treaty right to fish in pursuit of a moderate livelihood. The statement said officers from the Fisheries and Oceans Department, the RCMP, the coast guard and from public safety are being deployed to help with any dangerous situations.

A spokesperson with the fisheries department said Tuesday in an email that a conservation and protection team is "monitoring activity in southwest Nova Scotia."

"If charges are warranted based on the findings of the investigation, the matter would be referred to the Public Prosecution Service of Canada."

A Mi'kmaq chief says he's not satisfied with the federal government's response in the ongoing conflict between Indigenous and non-Indigenous fishermen in southwestern Nova Scotia.

To properly address the unfolding situation, Sack said, the government needs to step up and keep non-Indigenous fishers from interrupting their work.

"The government could uphold our treaty and respect our moderate-livelihood management plan and keep those commercial fishermen from interfering with what we're doing," he said.

A 1999 Supreme Court decision affirms the treaty rights of Mi'kmaq people to fish for a "moderate livelihood." Sack said the Mi'kmaq are gathering information to help them determine the monetary value associated with that term.

Sack put out a call on Facebook for fishing gear to replace the equipment that was taken by the non-Indigenous fishermen over the weekend. He said his community received traps and other gear from First Nations fishermen in the Atlantic region.

I'm wondering"
1) Is it true that this is the season crucial to reproduction of the species
2) Is there a reason that the First Nations fishermen weren't harvesting throughout the season
3) Given the sustainable approach of First Nations peoples to harvests of other species ... FI, not hunting does and cow moose until fawns and calves are independent, and not while they are pregnant ... if it is indeed a crucial reproductive season, and harvesting wasn't going on during the season, why begin harvesting at the sensitive time ... is there a particular rationale?
Again, if those situations are in fact so, did, FI, non-indigenous commercial "fishermen" interfere with their ability to set traps and harvest during the usual harvest time?
I'm surprised, actually, that journalists haven't asked those questions, as they seem to me obvious ...