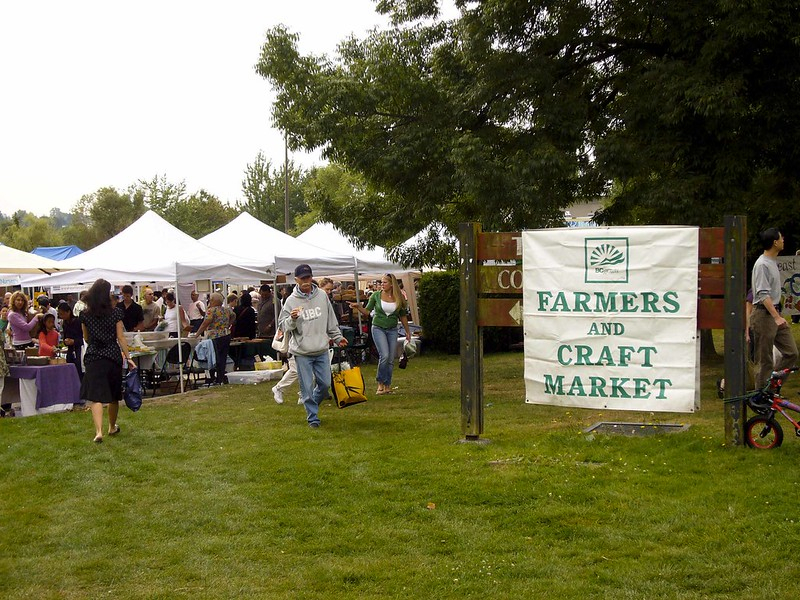 Social distancing was the norm for Vancouver farmers markets this year, unlike in years past. Photo by Paul Joseph/Flickr.
Previous story
Next story

“It took a while for people to try it, but now (sales) are going well,” said Bennick, co-owner of Tesfa Farms in Surrey, where he raises water buffalo for dairy and meat production.

That’s a good sign for Vancouver’s farmers markets, which, like most grocery stores, appear to be weathering the pandemic well. With restrictions on customer numbers and extra expenses associated with increased hygiene precautions, it wasn’t a record-breaking year — but Vancouverites’ commitment to local food kept the markets afloat.

Roughly 250 vendors sell at the markets, peddling everything from brussels sprouts to blueberry strudel produced across B.C. They run year-round, with seven different locations scattered across the city during the summer that are consolidated into two once winter hits.

Like grocery stores, farmers markets were designated as essential services provincewide early in the crisis. In Vancouver, that meant there was only a week in early March when city dwellers couldn’t easily purchase local food while Smit and other organizers figured out the new social distancing rules.

“We learned really quickly that people love their local food, and that they believe it’s important to support our local producers,” she said.

Smit said social distancing restrictions and lockdowns cut traffic to the markets by about half, especially in March and April, while sales remained strong for vendors who did attend. She said when averaged across the spring and summer, the total value of sales dropped less than 10 per cent despite significant reductions in the total number of visitors at the markets.

The drop in visitors didn’t stop the creation of dauntingly long lines. Limits on the number of people allowed in the markets at one time, mixed with six-foot social distancing requirements, saw many queues stretch hundreds of metres beyond the markets’ gates, even as the organizers strived to keep people flowing through the market and wait times manageable, Smit said.

“But then, of course, there are some folks who can’t come for a lot of different reasons,” she said. “So we jumped at the opportunity to do some online pre-orders, and I think we reached more people than who would have come and sat in line.”

The next decision the organization might have to make will be around mask-wearing, she said. The outdoor markets are relatively low-risk spaces, so masks currently aren’t required, though they’re recommended.

“We can, in some cases, wear a mask, and that communicates a level of care. And when (one person) wears a mask, others do, too,” she said.

As for the vendors, Smit said their experiences have really varied, and not always predictably.

Newer, smaller vendors with simple stalls — as opposed to the bigger and more sinuous setups that more established or larger vendors use — have done remarkably since visitors are trying to avoid crowds. And for some, that bump has been a lifeline.

“A lot of these small businesses rely on their market income (especially because) some folks supply restaurants. (Those sales) went down significantly at the beginning of the season and haven’t come up to normal.”

Big sales for small stalls aren’t the only success stories of the COVID-19 era. Markets with 30 vendors or under, as opposed to the roughly 50 at larger locations, saw similar visitor numbers as previous years — and stronger sales.

That has shaped Smit’s planning for this year’s two winter markets, which open in November and will be divided into sections, and for summer markets in 2021.

Still, despite the upheavals that have characterized 2020, for Bennick and his water buffaloes, at least something has gone according to plan: He figured out how to keep mothers and calves together without contaminating the milk (usually dairy farms, regardless of the species being milked, separate the cows and calves at birth to keep the calves from suckling).

“The 2020 vision was to try to keep (that mother-calf) bond intact. It’s one thing the pandemic didn’t get in the way of, and actually made easier, because I had an excuse to work long hours and had nowhere else to go,” he said.

Except, that is, to sell gelato at the farmers market.

I must say I think water

I must say I think water buffalo is a really weird flavour for gelato. ;) But to each their own, I suppose.