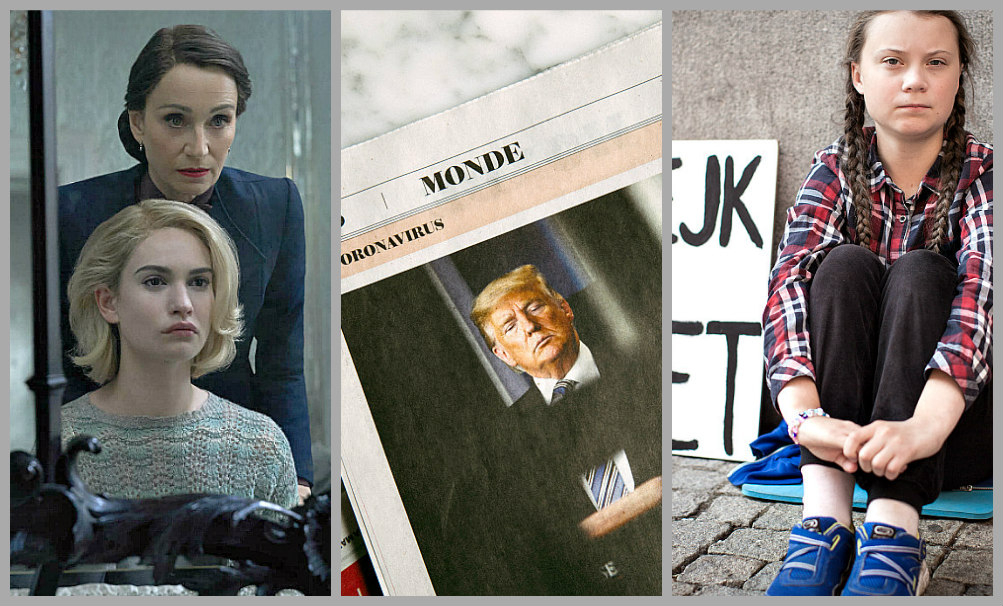 Also: A tangled romance in Hong Kong and two other tales that inspire.
Previous story

Along with these latest reviews, here are a few notes about other films:

Monkey Beach, the B.C.-based tale about Indigenous spirituality, is back this week. It’s playing at the International Village and 5th Avenue theatres.

Martin Eden, which I haven’t seen yet but which has gotten very strong and positive reviews, is at Vancity Theatre.

Also, just ended there but now streaming on Netflix there's my favorite film of the year so far, The Trial of the Chicago 7.

And elsewhere, these are new:

REBECCA: No, I don’t think this new version of the classic Daphne du Maurier tale will replace Alfred Hitchcock’s, which got 12 Oscar nominations and won two back in 1941. But it’s a worthy remake, colourful and elegant, though not quite as tense and eerie as its predecessor. It respectfully follows the storyline, except for a major change near the end. Why that, I have no idea, although it does bring a more contemporary slant to the ending. Another update gives us dialogue about things the movies weren’t allowed to discuss all those years ago. So it’s stronger in some ways, too.

The central character, a young woman played a little too lightly by Lily James, meets the dashing Max de Winter (Armie Hammer) in Monte Carlo and is so swept off her feet that within days, she’s married to him and headed to his estate in England called Manderley. There, she encounters the imposing housekeeper Mrs. Danvers (played brilliantly by Kristin Scott Thomas), a large staff, a grizzled man squatting in a cliffside house (cryptically saying, “I won’t tell”) and a chilly ongoing remembrance of Rebecca, the first Mrs. de Winter. She died, but no one will say how. “She’s still here,” Danvers says, and later spouts this: “You’ll never replace her. You’re worthless.” James' character has a lot to learn about her new life, her husband, his history and the brooding atmosphere in his house. The film gives it to us at a nimble pace and in classic British style set in the 1930s. It’s directed by Ben Wheatley, taking a step up from his usual, Sightseers and Kill List. (Vancity Theatre and Capitol 6 in Victoria) 3½ out of 5

TOTALLY UNDER CONTROL: Donald Trump doesn’t get all the blame here for the U.S.'s failure in the COVID-19 crisis. A good part of it goes to bureaucrats doing and saying what they think he wants. No shutdown of the economy, for instance. Re-election was at stake. So when he said the virus was totally under control because there had been only one death (in Seattle), they didn’t challenge. They — many of them political appointees — downplayed the threat even as the deaths mounted. The one official who dared to sound an alarm, Dr. Nancy Messonnier from the Centers for Disease Control, who accurately predicted what soon happened, was pushed out of the front line. Mike Pence was put in charge of the virus control effort.

Trump set the tone with his assurance that the virus would magically go away. This film by top documentarian Alex Gibney, working with two associates, Ophelia Harutyunyan and Suzanne Hillinger, shows every step in how the U.S.'s response “descended into division and chaos.” If you’ve followed the news, you know much of this already. It’s startling, though, to see it assembled in such a comprehensive way, get new details and hear damning insights and regrets from key medical figures and onlookers. The testing program failed initially because the orders from Washington were faulty. Jared Kushner’s task force to find protective equipment was staffed entirely by unpaid volunteers, who had no contacts or experience and achieved almost nothing. Trump, though, assured Americans repeatedly that his people were doing a tremendous job and the Democrats were just pushing another hoax. The film is so up to date that it could already report more than 200,000 COVID-19 deaths in the U.S. The day after this film was finished, Trump announced he had tested positive, a fact that appears as a grimly ironic postscript. It may not be the final history, but for now, it’s tremendous. (Available digitally and on demand) 4½ out of 5

I AM GRETA: This film is right there all the way beside Greta Thunberg. Swedish filmmaker Nathan Grossman lucked out when he first saw and filmed the climate change activist sitting on a sidewalk staging what she called a climate strike. From that modest start, Thunberg inspired thousands of other students to march and protest, was invited to speak at international meetings (and even to the Pope) and peaked with her famous “how dare you” speech at the United Nations. The film tells us a little about her. Not as much as we’d like, but enough.

Most interesting is to see her change from a mild schoolgirl to a campaigner increasingly annoyed by politicians promising action and not following through. “We have started to clean up your mess, and we won’t stop,” she says in Brussels. “People will demand things,” she tells French President Emmanuel Macron. And so on, through a series of visits and with a growing following. On Fox News, she’s called that “Swedish child” and “mentally ill.” She has Asperger’s syndrome. One person calls her “laser-focused, but the president of Brazil calls her “a brat” and Trump mocks her. It’s all here, accompanied by lots of media footage and, from earlier years, home movies. Engrossing stuff. (International Village) 4 out of 5

MY PRINCE EDWARD: Movies about romance, comedies or not, often spin complex difficulties on the way to that ending, whatever it may be. How’s this for tangled? A young woman who works in a Hong Kong wedding shop is on the verge of marriage herself. Her guy, a slob though he is, has proposed. His mother is ready to book a banquet and buy them a flat. Her own mother, estranged from her, is still offended that she left home and moved in with that guy.

Easy to resolve, you say? Well, consider this: She’s already married. Ten years ago, she got into a “sham” marriage to help a Chinese man get a Hong Kong residency permit. She did it for the money. Now she can’t get a divorce because there’s no official record and it would take a year or two to find one. Want more complication? She can’t tell her fiancé because he would reject her if she were a divorcée. So she secretly goes looking for the “husband,” but he has new demands. He’ll divorce her if she agrees to help him get another permit or give him money. It's an absorbing story, nicely directed by Norris Wong, making her feature debut, and very well acted by Stephy Tang in the lead. Devious men and a sidebar of real estate are the main themes. (Vancity Theatre starting Saturday) 3½ out of 5

2 HEARTS: Sunny, cheery and uplifting are among my reactions to this one. Cloying and almost maudlin are in there, too. Maybe that’ll help anybody considering it. They can choose by which side they identify with.

The film intercuts the lives of two couples as they meet, develop feelings and learn more about each other. A college student (Jacob Elordi) bumps into a pretty female student (Tiera Skovbye) enough times to start a relationship. Meanwhile, the son of the Cuban Bacardi family (Adan Canto), exiled to Miami and now based in Puerto Rico, chats up a stewardess (Radha Mitchell) — he calls her that — on a flight and meets her again and again in locations like Hawaii and Seattle. Both couples get married, and though time and geography separate them, a plot twist will connect them. Some say they could see it coming. I didn’t until quite far in. Sports injuries and doctor and hospital visits recur, and there’s a TV movie feel to this one. The characters are pleasant but not exceptionally interesting. They and their stories are real, based on a memoir that expounds “life is happening for us, not to us.” It’s faith-based lite, filmed here in Vancouver. (International Village and suburban theatres) 2½ out of 5

CLOUDS: Here’s another inspirational story taken from real life, but not cloying as many of these are. The title of the book it is based on, Fly a Little Higher: How God Answered a Mom’s Small Prayer in a Big Way, might make you think it’s a religious film. That’s there, but it's subtle, more in the background than up front. Even a trip to Lourdes in France isn’t trumpeted very much. The aim there was to help a young musician rid himself of the cancer that was taking over his life.

Minnesota teen Zach Sobiech was a singer-songwriter who was under treatment for the disease, got the word that it was terminal and decided to do something with the little time he had left. That included writing songs, one of which, Clouds, went viral and became a hit. It was No. 1 on iTunes and downloaded 200 million times. There’s an emotional scene near the end when he comes on stage to sing it, can’t get the words out and the entire audience sings it for him. It’s a sweet movie advocating for doing what you can with your life. It’ll bring tears. Fin Argus stars, with Sabrina Carpenter and Madison Iseman as the girls in his life, and Neve Campbell solid as his mother, Laura. It was filmed in Montreal. (Streaming on Disney+) 3 out of 5