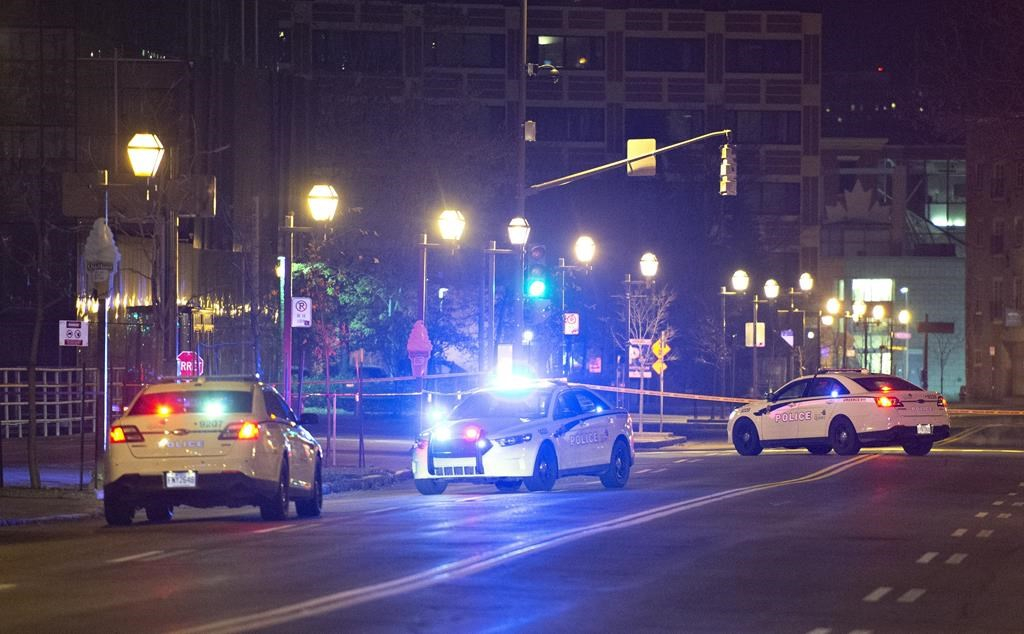 Police cars block the Quai Saint-Andre street where they arrested a man in medieval disguise, early on Sunday, Nov. 1, 2020 in Quebec City. Photo by The Canadian Press/Jacques Boissinot
Previous story
Next story

Residents of Quebec's picturesque capital grappled with grief and shock on Sunday as they mourned the deaths of a beloved neighbourhood hairdresser and a well-respected museum employee slain in what police describe as a deliberate sword attack targeting random strangers.

Impromptu vigils and makeshift memorials sprang up near the stretch of Old Quebec City where police allege a young man went on a 2.5-hour rampage wielding a katana-style sword. Hairdresser Suzanne Clermont, 61, and 56-year-old museum employee Francois Duchesne died in the Halloween-night attack that also left five others injured.

Residents huddled outside Clermont's home on picturesque Des Remparts Street, where they placed a box filled with flowers and a stuffed cat at her front door.

One neighbour said Clermont was out smoking a cigarette when the stabbing took place.

“She was my friend. She and her partner Jacques were a lovely couple,” said Lucie Painchaud, a resident of the area for 16 years. “It’s unbelievable, I can’t still compute."

The horror of Saturday night's events was also setting in at the nearby Musee National des Beaux-Arts du Quebec, where Duchesne was described as a much-loved employee.

"We are all in shock," spokeswoman Linda Tremblay said in a statement, describing the attack as an "inexplicable and unfair tragedy."

Police offered only a handful of details about the late-night attack that played out in the narrow cobblestone streets of Old Quebec, a popular tourist destination packed with historic buildings and landmarks.

Quebec City police Chief Robert Pigeon said the suspect had been dressed in "medieval" garb and swung a katana-like sword at randomly chosen victims in an attack that stretched into the early hours of Sunday morning.

"Last night we were thrust into a night of horror when a 24-year-old man who does not live in Quebec City came here with the clear intention of taking as many victims as possible," Pigeon said during a Sunday morning news conference.

Police were first summoned to the scene at around 10:30 on Saturday night and proceeded to pursue a suspect through the narrow streets of Old Quebec until his arrest shortly before 1 a.m.

Carl Girouard has been charged with two counts of first-degree murder and five counts of attempted murder in relation to the attack, according to the Quebec Crown prosecutor's office.

Girouard appeared in front of a judge via video conference on Sunday afternoon and is slated to be back in court on Thursday.

The identities of the five people injured in the attack are protected by a publication ban.

Pigeon said the suspect, who hails from the north shore of Montreal, has no known links to terrorist groups. Police believe his motivations appear to be personal in nature, he added without providing further details.

He also said the alleged attacker has no known criminal record, but shared plans to commit this type of act in an unspecified "medical contest" about five years ago.

The bustling sector of Old Quebec where the rampage unfolded was quiet Sunday, with large portions blocked off as part of the massive police probe. The police chief noted the investigation involved around 25 different crime scenes.

Some residents out for their morning stroll said they heard the sirens and could see flashing police lights on Saturday night.

Stanislas Thomassin, who lives just 300 metres from where one of the attacks took place, said a friend noted alerts on social media on Saturday night but they didn’t make much of it.

“This morning, I got a note from a friend in France in a panic about me, that’s when I realized the horror of what had happened,” Thomassin said. “It’s normally very calm, very peaceful in Old Quebec.”

Condolences poured in from across Canada for the victims and their families, with Prime Minister Justin Trudeau saying in a tweet that his "heart breaks" for them.

To the people of Quebec City, and to all Quebecers: Canadians across the country are with you. Our hearts go out to the families of François Duchesne and Suzanne Clermont, and to everyone affected by this terrible tragedy. https://t.co/3Cxgxdh48z

Federal Conservative Party leader Erin O'Toole and Jagmeet Singh, leader of the New Democratic Party, also offered their condolences, while Quebec Premier Francois Legault said the entire province had woken up after a "night of horror."

"I don't have the words to describe such a tragedy," Legault said in an early morning tweet. The flag outside the provincial legislature was also lowered to half-mast.

Quebec City Mayor Regis Labeaume said the attack has shaken the city, which is still recovering from a deadly shooting at a local mosque in 2017. "We're going through a tough situation," Labeaume said during the morning police briefing.

Back in Old Quebec, the local city councillor, Jean Rousseau, said Clermont's death had left residents shell shocked. Community members had gotten closer during the COVID-19 pandemic, with people seeing each other on their nightly walks.

“It’s a tightly knit community, everybody knows everybody here,” Rousseau said. “Clermont was well appreciated and everybody liked her.”

Carol Proulx, co-owner of a clothing store next door to the salon where Clermont worked, described the hairdresser as a "friendly woman." Proulx also knew Duchesne for many years and said he was shocked by the attack.

"He's someone who had a great career and was well loved by those who knew him," Proulx said.

"It touches us all," he said of the tragedy. "Quebec is a nice big city, but we see that at the same time, it's a small village."

This report by The Canadian Press was first published Nov. 1, 2020.

Quebec City stabbing suspect wanted to hurt as many victims as possible: police