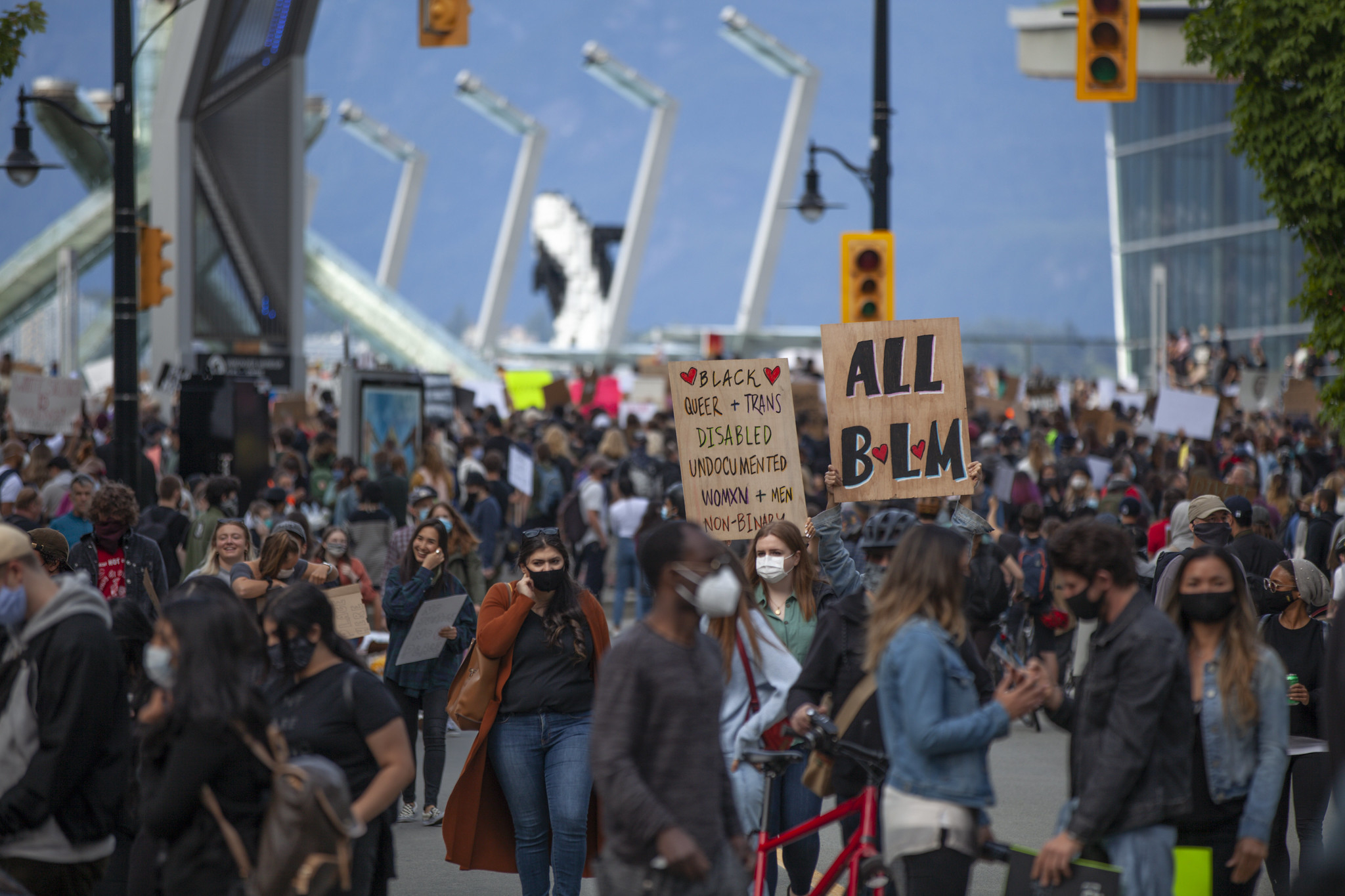 An anti-racism rally at Canada Place in Vancouver on June 5, 2020. Creative Commons Flickr Photo by GoToVan
Previous story
Next story

A new poll reveals that six in 10 Canadians believe now is the time for the federal government to make “major changes to fix long-standing problems in society” such as inequality, racism and the climate crisis.

The national telephone survey, conducted last month by Environics Research and published Monday, also found two-thirds of respondents showed support for aiming post-pandemic government spending at renewable energy sources such as wind and solar, compared to just 22 per cent who said the priority should be fossil fuel investments.

The poll demonstrates support for continued federal spending and comes as the Liberal government of Prime Minister Justin Trudeau reportedly considers whether to set aside billions of dollars in annual permanent funding for new social programs.

And it signals a level of popularity for the government’s strategy, laid out in the throne speech, to pivot from supporting people during the pandemic to building a plan for “stimulus and recovery,” including addressing reconciliation, systemic racism, gaps in social systems and the risks stemming from climate change.

“Canadians get that building back better can't just be about switching light bulbs. It also has to be about addressing the legacy of sexism, racism and colonization that are inseparable from the climate crisis,” said Keith Stewart, senior energy strategist at Greenpeace Canada, which commissioned the poll.

“We have an opportunity to turn the tragedy of the pandemic into a catalyst for building a better world, so let's not blow it.”

The debate over government spending is unfolding against the backdrop of a coronavirus-battered economy, with unemployment still elevated and the federal deficit projected to hit $328 billion for 2020-21.

By July, the government had outlined over $230 billion in direct support to Canadians and businesses to combat COVID-19 and bolster health and safety initiatives. Trudeau has continued to unveil more spending plans, announcing last month that a financing agency would spend $10 billion on infrastructure projects.

The Oct. 6-11 poll shows that 62 per cent of those questioned, as well as majorities in all population segments, believe that now is the time for transformative change. But this view isn’t held by respondents who also identified as Conservative; by almost the same margin, 63 per cent, that group believes that now is not the time for such actions from the federal government.

A new poll reveals that six in 10 Canadians believe now is the time for the federal government to make “major changes to fix long-standing problems in society” like inequality, racism and the climate crisis.

Other opposition parties see it differently. NDP Leader Jagmeet Singh wants Trudeau to enact a range of measures including a wealth tax and a temporary “excess profit tax,” after Canada’s richest saw their wealth accumulate further this year. Meanwhile, the Green party wants to see an overhaul of social fiscal programs so that they are combined into a Guaranteed Livable Income.

Environics asked Canadians a series of questions related to the federal throne speech and the environmental promises it contained. The results are based on a representative sample of 1,000 adult Canadians with a margin of error of +/- 3.1 percentage points at 95 per cent confidence.

The poll found the greatest support for federal spending on renewable energy in Eastern and Central Canada, with the highest levels of support in the Atlantic region and Quebec at 77 per pent each, and 71 per cent in Ontario. Support for renewables investment, however, also extends into the West at 57 per cent, including 56 per cent in Alberta.

Environics also found support from almost nine in 10 Canadians for the importance of prioritizing “new jobs related to protecting and restoring nature and the environment.” This support was also strong in the Atlantic region, with 72 per cent in favour, as well as among lower household incomes. By comparison, only 34 per cent of Conservative supporters said this was very important.