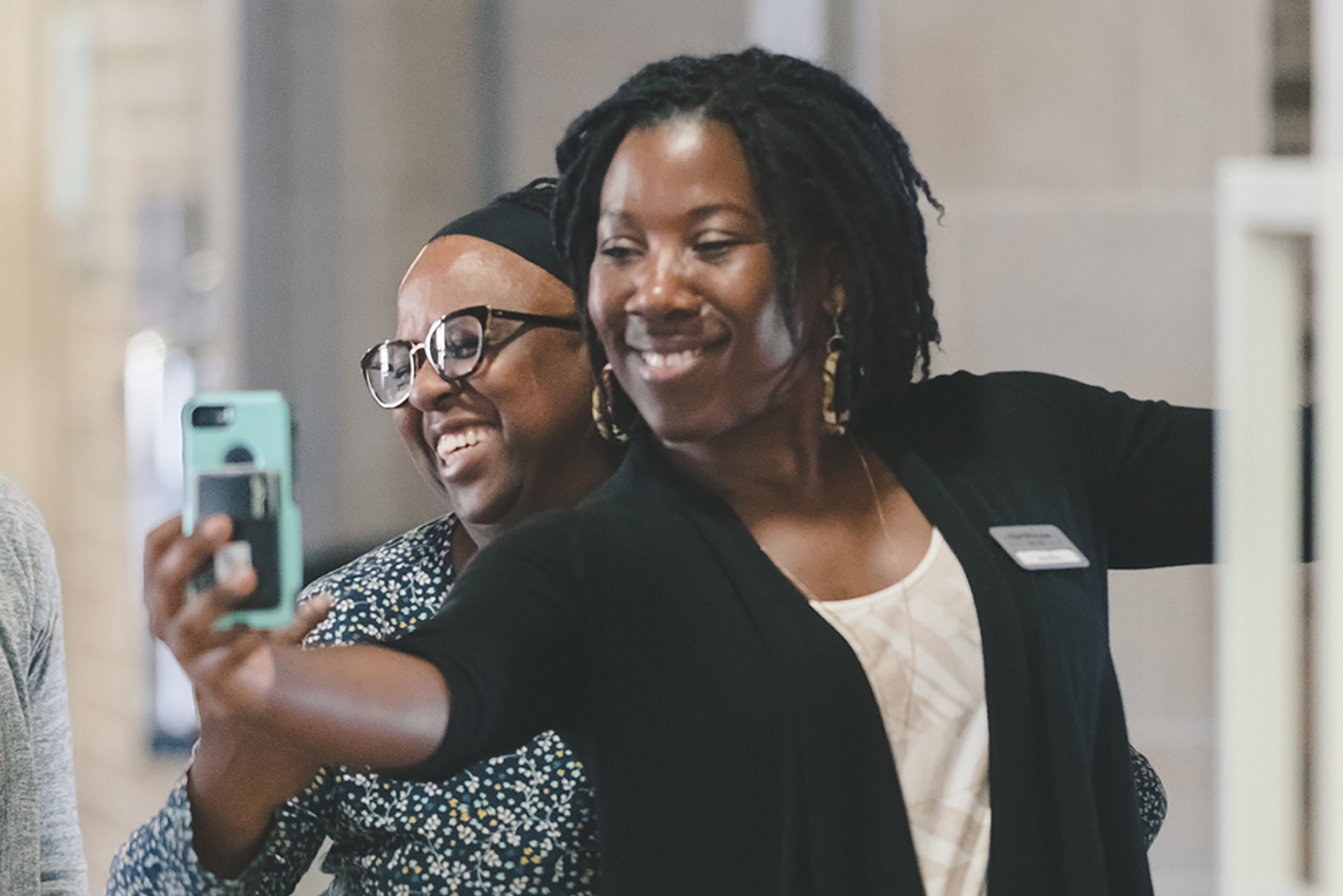 Program co-leads Zoe Dille (left) and Jessica Rayne take a selfie during the Humanz of Hip Hop event in 2019. Photo by Jiduo An
Previous story
Next story

Hip-hop culture has much to add to the racial justice conversation taking place in the streets and on basketball courts across the United States and even in Canada, says a curator of a University of Toronto education series on the movement.

With 2020 bringing not just a pandemic disproportionately hurting Black people and other people of colour but also a seemingly endless and escalating list of Black victims of U.S. police violence, the dominant cultural expression of young Black America is a primary venue for artistic response.

So on the day after the U.S. election, the Humanz of Hip Hop conference aims to raise the voices of revolution with a series of moderated discussions between hip-hop artists and scholars.

“Ideally, even with the confines of the pandemic and having to be digital, we're trying to create with these conversations a kind of digital cypher, and the cypher is at the root of hip hop,” said Zoe Dille, a manager of learning and community at U of T’s Hart House, a student activity centre.

A cypher in hip hop typically refers to improvisational rapping, often accompanied by beatboxing and breakdancing, while the word can also mean a coded message.

Hip hop is about more than just rapping rhymes over beats, said Dille, who situates hip hop on a post-colonial continuum as a cultural movement in reaction to systems of power. She says hip-hop’s message for today’s world is clear: unity, shared experience, social activism.

“Whenever you can privilege those voices, and they can get a platform to talk about their lived experiences or to talk about the moment that we are in, that's always important and there is a heightened context right now,” she said.

A short video from the inaugural Humanz of Hip Hop conference in 2019. Source Hart House via YouTube

Those messages will be in focus during this week’s two-day conference, which features speakers including DJ/scholar Lynnée Denise, who will join the online discussion from Amsterdam.

Dille says that piping in distant guests to a live setting can be “a bit weird,” but that with everything online this time around, the reach of the conference has expanded and barriers to entry have fallen.

The day after the U.S. election, the Humanz of Hip Hop conference aims to raise the voices of revolution with a series of moderated discussions between #hiphop artists and scholars.

“Now we can just think about anything and pretty much do it,” notwithstanding time differences, she said. “The world has opened up in that way, so that’s been a positive, I think.

“That's freed us up in some ways, but, of course, now we're however many months into this and I think people actual want to see real faces in real space,” she added.

Noting the spectre of digital fatigue, Dille said she hopes at least a hundred people take part in the conference.

Dille, a dedicated basketball fan, is also looking ahead to next week’s instalment of Hart House’s Hip Hop 101 Café series, which will involve two sports broadcasters discussing the leadership role that NBA players took this summer in showing solidarity with Black Lives Matter protesters in the streets.

Players with the Milwaukee Bucks refused to take to the court in the immediate aftermath of the police shooting of Jacob Blake in nearby Kenosha, Wis., in August, delivering a powerful message from the locker room.

Their protest spread to work stoppages at other NBA playoff series, then onto women’s basketball, baseball and soccer, and finally to hockey. Some NFL teams cancelled practices during their off-season.

Dille said that the event will unpack the complexity of seeing NBA players as multimillionaires, but “then realizing that many of them have been victims of police brutality ... they are all subject to being Black men in America, mostly, when they’re not on the court.”

“Nobody really cares about them being in the NBA when they’re not on the court,” she said, noting the issue enabled Black men to be vulnerable in sharing their experiences.

Sterling Brown, one of the Bucks players who read their collective statement, has a federal lawsuit pending against the City of Milwaukee after police officers used a stun gun on him following a parking violation in January 2018.

This week’s conference technically marks the start of Humanz of Hip Hop’s second year of operations, but Dille said a summer of online programming has merged the two seasons together.

Typically, the series would have wrapped up in April when exams start and then organizers would plan for the following year, she explained, “but when lockdown came in in March, it was a mad scramble to try to switch everything to virtual, and we worked all summer long.”

That included teaming up with Yellowbrick to deliver a webinar in June on how to break into the sneaker industry, as well as regular drop-in virtual sessions for those interested in producing hip-hop beats.