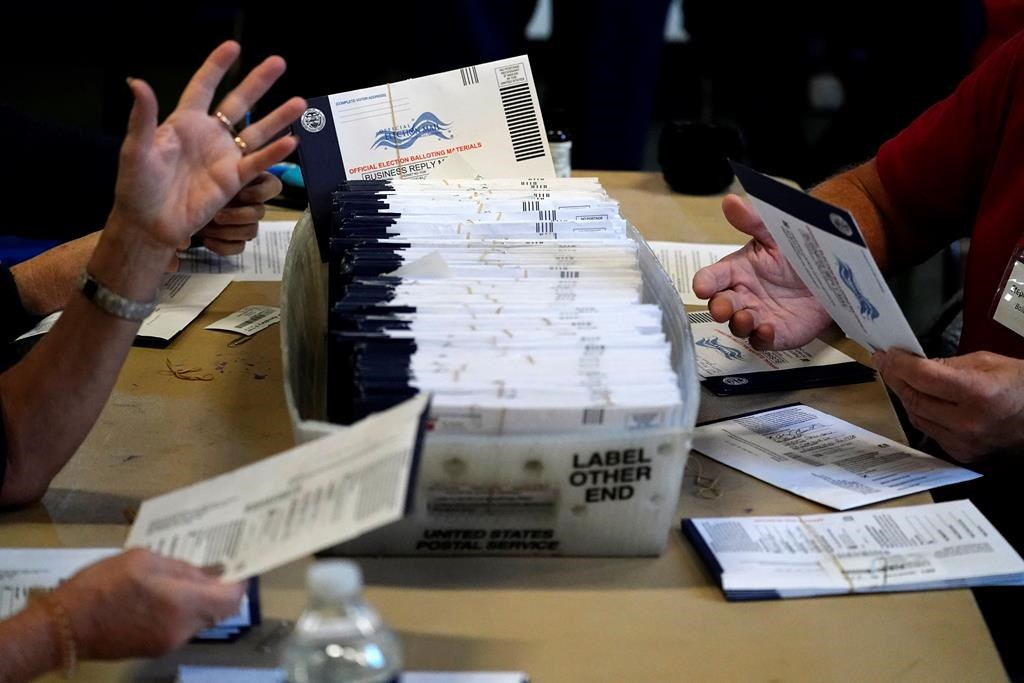 The political silence in Ottawa was deafening on Wednesday after Donald Trump's bombastic declarations of victory in the U.S. presidential election and his threat to take his re-election fight to the Supreme Court.

Trump was following through on his plan to claim a triumph even though mail-in votes were still being legally counted, including in key swing states such as Pennsylvania, a process that could take days.

While the temptation to speak out in defence of the apparent breach of democratically accepted electoral norms might have been overwhelming, the Trudeau government has held its tongue.

Some analysts, who have seen the fallout of authoritarianism first-hand, say silence was the only option.

"Canada and other allies need to stay quiet, except for statements supportive of an orderly democratic process. What happens in these next hours and days is being watched very carefully around the world by legitimately elected leaders, dictators and coup leaders alike," said Michael Bociurkiw, a Canadian who worked for the Organization for Security Co-operation in Ukraine for two years following Russia's invasion of Ukraine's Crimea region in 2014.

Bociurkiw said the silence is imperative even though Trump's remarks strike him as "something that we might have expected to come out of the mouth of someone like Vladimir Putin, who's a master at fomenting chaos, causing confusion."

Stephen Pomper, senior director of policy for Washington-based International Crisis Group, said it was "reckless and wrongheaded" for Trump to prematurely declare victory but the world needs to step back and wait patiently.

"Both campaigns need to create space for all votes to be counted, as do U.S. and foreign political leaders. Foreign leaders should express their support for the democratic process and hold back on any congratulations until it has run its course."

There's more at stake for Canada than just giving American the voters the time and space to be fully counted.

Any premature declaration, especially if it appears to side with Democrat Joe Biden, could create a damaging economic backlash if Trump were to eventually prevail.

The political silence in Ottawa was deafening on Wednesday, November 4, 2020, after Donald Trump's bombastic declarations of victory in the U.S. presidential election and his threat to take his re-election fight to the Supreme Court.

The Trudeau government learned that lesson the hard way during the lengthy, and at times bitter, renegotiation of the North American Free Trade Agreement. The Trudeau Liberals strictly enforced communication discipline that forbade any reaction to Trump's provocative tweeting throughout the talks, including trash-talking Canadian farmers and steel producers.

When Trump imposed punitive tariffs on Canadian steel and aluminum, the government did publicly brand them as unfair to Canada. When Trudeau reiterated that point at the closing press conference of the 2018 G7 leaders' summit he was hosting in Charlevoix, Que., Trump went ballistic on Twitter on his way out, calling Trudeau "very dishonest and weak."

Last week, Trudeau telegraphed that neither he nor Canada's top allies would be making any declarations about the U.S. vote until the will of the American voters had been settled. Appearing at a virtual meeting with European Commission President Ursula von der Leyen and Charles Michel, the European Union Council president, he committed Canada to working with whomever Americans elected.

"The uncertainty means we continue to stay stoic, avoid any comment that will come back to bite us and continue to plan for every contingency," said Colin Robertson, the vice-president of the Canadian Global Affairs Institute and a retired diplomat with extensive U.S. experience.

"The Congress will look roughly the same: a slimmer Republican Senate majority and House (with a) slightly shaved Democrat majority. This means we need to continue to work both sides of the aisle because our interests are many, and we need to be constantly reminding Americans of why we matter and why trade serves their interest as well."

Behind the scenes, Canada and some of its Western allies are likely dreading another scenario: what if Trump picks up the phone and wants to talk before the election is settled?

It's not a topic that the Canadian officials or any of their Western counterparts will discuss on the record.

But Bessma Momani, an international affairs specialist at the University of Waterloo, said that's something they may have to brace for.

"A big challenge for Canada now is that Trump may want to declare victory before all votes are counted and expect allies to send in their congratulations," she said.

That could leave Canada in a situation where "Trump will take this very personally and be punitive on trade matters."

Regardless of how the election turns out, Americans are more divided than ever and the Canadian government's approach must be recalibrated to reflect that, said Sarah Goldfeder, a consultant and former U.S. diplomat who served two ambassadors in Ottawa.

"This narrative that Trump was just (elected by) a lot of Americans that were, you know, stupid or mistaken, and they didn't really mean to vote for him ... that's not actually true."

Even if Biden wins, "that doesn't mean that the underlying division, negativity, unrest, distrust" that has taken hold in the U.S. political discourse will have suddenly disappeared, said Goldfeder.