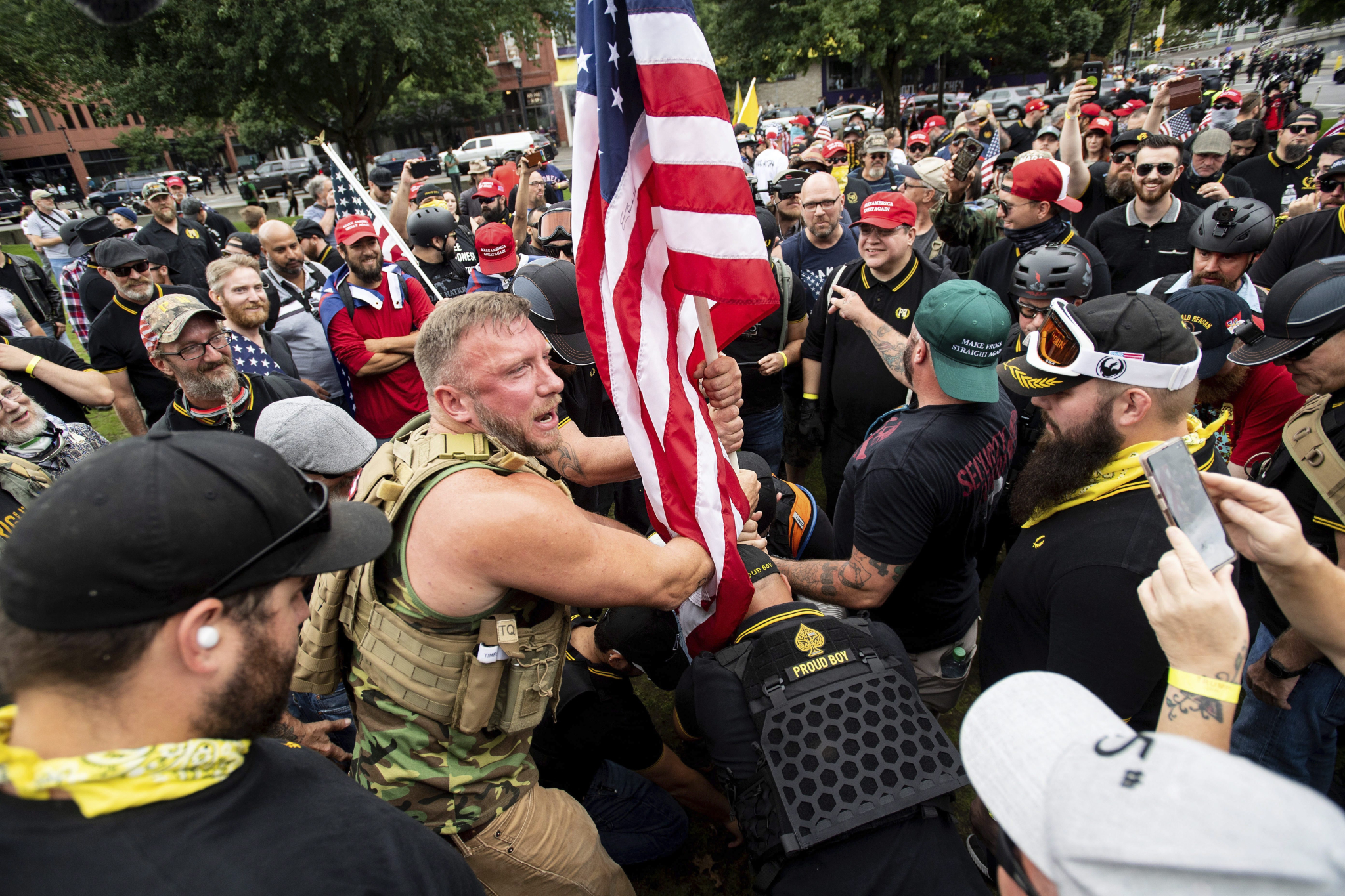 Members of the Proud Boys, a far-right group with Canadian roots, plant a flag at a rally in Portland, Ore., on Aug. 17, 2019. Photo by Noah Berger/AP Photo
Previous story
Next story

This is the sixth of a series of stories Emma McIntosh is writing as part of National Observer's special coverage of the U.S. election. Read the first, second, third, fourth and fifth stories here.

Long before Donald Trump was elected president of the United States — after a campaign kickstarted by xenophobia and racism — hate crime was already on the rise in Canada.

More hate groups were active in Canada than researchers had previously thought, a study found in September 2016, two months before the presidential election. And Canadian attitudes were shifting: an EKOS Research poll from 2015 found that 41 per cent of Canadians said the country was taking in too many immigrants from visible minority groups.

Politicians were already tapping into rhetoric that critics called Islamophobic ⁠— the former Conservative federal government’s attempt to ban niqabs in citizenship ceremonies was one example, said Barbara Perry, director of the Centre on Hate, Bias and Extremism at Ontario Tech University. Canada also has a long history of racism, from settler colonialism to slavery, the internment of Japanese Canadians during the Second World War and residential schools.

“There was some fertile ground there, I think, for the far right to play off of,” Perry said.

“And then Trump burst onto the scene and blew it up.”

In the aftermath of the vote, as the United States saw a sharp uptick in hate-motivated incidents, Canada did, too.

“The election in 2016 totally eliminated all sense of civility from politicians, totally evaporated the expectation of civility in conversations about politics,” said Mohammed Hashim, the executive director of the Canadian Race Relations Foundation.

Now, the 2020 U.S. presidential election is upon us. And whether Trump is re-elected or not, the racism he tapped into isn’t going away any time soon in the U.S or in Canada, experts told Canada’s National Observer. That genie can’t be stuffed back in its bottle.

In the U.S., the FBI has warned police across the country to expect an increase in violent attacks from extremists “across the ideological spectrum.” The RCMP didn’t respond to questions about whether they’re expecting anything similar north of the border, but Perry said she’s concerned about the potential for violence in the days following the election.

Whether Donald Trump is re-elected or not, the racism he tapped into isn’t going away any time soon in the U.S or in Canada, experts say. #Election2020 #cdnpoli

“I really hope I’m wrong and being overly pessimistic,” she added.

Prime Minister Justin Trudeau has said the Canadian government is readying itself for possible “disruptions” after the election.

What happens next will influence us across the border, like it or not, Hashim said. Canadians react to norms set by our neighbours to the south, he added, and unrest there tends to trickle north.

“The risk of that is violence, it’s civil unrest, which we’re seeing on a mad scale in North America right now, and I’m worried about who that inspires ... My suspicion is that things like that inspire people who are disturbed and who are prone to violence.”

‘A dynamic time for the far right’

In 2016, reaction to Trump’s victory was swift: the next morning, graffiti using a racial slur and referring to the new president was found in a Regina neighbourhood. Similar incidents were reported in the weeks that followed: in Ottawa, for example, swastikas were painted on a synagogue, while racist posters were placed in a park in Toronto.

“When those extreme voices become more normalized ... conversations that are usually beyond the fray of acceptability in society now have an opportunity,” Hashim said.

Such movements manifest differently here, said Erin Tolley, an associate professor of political science at the University of Toronto. Extreme-right political candidates have failed to get a foothold here the way they have in the United States, she added, although some politicians here have dabbled in Trump-like speech.

Canada has stricter hate crime laws than the U.S., she said, and the message that sends seeps into how people express racism.

“Canadians have learned that explicit racism is wrong and so they’ve learned to express their racial prejudices in ways that are much more implicit,” she said.

“That’s one reason why you’ll hear people say that in Canada, the ways people express their racism, people often refer to that as ‘polite racism.’ There’s nothing polite about it, it’s still racism ... The smug satisfaction that we’re much more open and tolerant than the United States, it’s a fiction.”

Activity from hate groups, emboldened by the election of a political leader who echoed their rhetoric, also increased here in the early years of the Trump administration and eventually hit a plateau, Perry said.

In 2017, the number of criminal incidents motivated by hate that were reported to police in Canada jumped by 47 per cent, Statistics Canada found. Although fewer incidents were reported in 2018, the most recent year for which data is available, the numbers remained high, Perry said.

“There was a real burst of engagement offline and obviously online,” she said. “Just so many groups visible and active on an array of social media platforms ... it’s been a dynamic time for the far right.”

Certain events added fuel to the fire. Canadians attended the infamous 2017 Unite the Right white supremacist rally in Charlottesville, Va., where a woman was killed by a neo-Nazi who plowed his car into a crowd of anti-racism protesters.

Trump defended the hate groups in attendance at the time, saying there were “very fine people on both sides.”

The president also fanned the flames this fall as the campaign hit a fever pitch. During the first debate in September, Trump refused to condemn extreme-right groups like the Proud Boys, which, as it happens, originated in Canada. Instead, Trump told them to “stand by,” a statement that Perry said hate groups in the U.S. and Canada saw as a show of support.

“It was interpreted by many as a call to arms,” Perry said, referring to Trump’s statements. “We’ve seen a lot of chatter about (Canadian hate groups) saying, ‘Yep, we’re there, too ... if you need us, we’re happy to come across the border.’”

The president has also repeatedly claimed, without evidence, that voter fraud is taking place, claims that Perry said have heightened the tension. Meanwhile, analysts are warning that the results of the election might be contested.

On Monday, the FBI confirmed it was investigating an incident Friday in which Trump supporters in vehicles surrounded a campaign bus for his opponent, former vice-president Joe Biden, on a Texas highway. The Biden campaign said the Trump supporters tried to run the bus off the road. (Biden and his running mate, Sen. Kamala Harris, were not on the bus at the time and no one was hurt.)

Hashim said he worries for the safety of people of colour here when he sees unrest in the U.S.

“What is really scary for me is when we see a rise of militia groups in the U.S.,” he said. “I don’t know if we’re going to have similar rises in Canada.”

‘It’s time for regulators to step in’

No matter who wins the election, Canada will have to reckon with the racism and hate that came to the surface after 2016.

There are no easy solutions, but one way to start tackling it would be through stricter hate crime legislation and better enforcement of the rules we do have, Perry said. As an example, she pointed to an incident in Nova Scotia last month where the RCMP were criticized for failing to stop an angry mob that barricaded Mi’kmaq fishermen inside a lobster storage facility, smashed its windows and set a van on fire. (The RCMP has said its officers tried to de-escalate the situation.)

“Something is wrong there when (police) don’t have the will to protect communities,” Perry said. “That’s got to change.”

Canada should also crack down on social media platforms, where hate speech has flourished, Hashim said.

“I don't have a lot of faith in social media companies to regulate themselves, so I think it’s time for regulators to step in.”

Tolley said she’d like to see politicians speak out more against racist acts when they happen, but polling that shows a significant share of Canadians holding prejudiced views “sheds some light on why politicians are quite restrained sometimes in their rebuke of Islamophobia and racism and anti-immigrant racism.”

The federal government needs to “find a spine,” Perry said. As an example of what politicians should be doing, she pointed to a case in June where federal NDP Leader Jagmeet Singh was kicked out of the House of Commons after saying a Bloc Québécois MP was racist when he did not support a motion that acknowledged systemic racism.

“We are never going to move forward if we’re afraid to name it,” Perry added.

“Leaders have to find the courage to acknowledge, explicitly, the kinds of issues we’re talking about.”

So it's on us. Humans who

What do I want? A future where we can express our remorse and fragility and to learn from it.

Kenney, Moe and Ford will use

Kenney, Moe and Ford will use it to fire up their base