Trump 'could go from the presidency to prison,' Democracy Now!'s Amy Goodman forecasts

By Luke Ottenhof | Opinion | November 6th 2020
#28 of 47 articles from the Special Report: Conversations 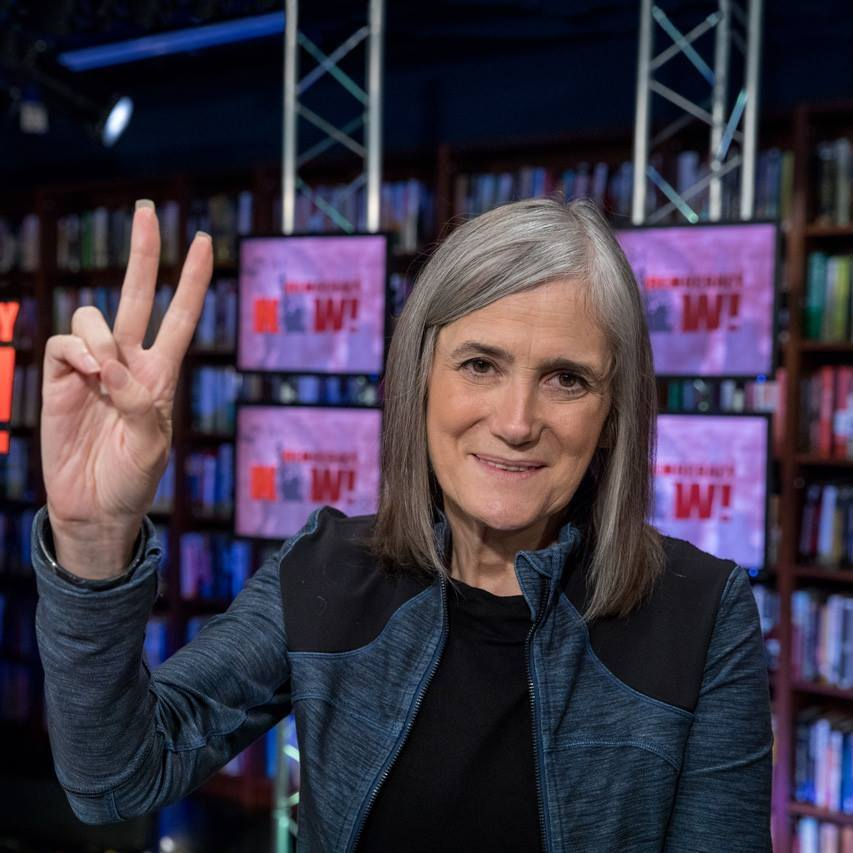 Just before 7:00 PM eastern time, after a Thursday that saw him losing precarious leads in key battleground states Georgia and Pennsylvania as vote counting continued, President Donald Trump was hunched wearily at a press podium in the White House. He was every bit the picture of a defeated leader, literally and figuratively bricking himself into a corner, his decrepit, white supremacist kleptocracy on the brink of total collapse. He returned sluggishly to his usual rhetoric, and spouted lies about voter fraud and election interference.

American media’s pundit class did not mince words. CNN’s Jake Tapper called it “pathetic,” and “sad,” while Anderson Cooper likened the president to an “obese turtle on his back flailing in the hot sun.” These were immediately played out for dramatic and comedic effect on social media.

In a public conversation with Canada’s National Observer editor-in-chief Linda Solomon Wood immediately following the president’s press conference, Democracy Now! co-founder and host Amy Goodman was similarly direct, but noted that Trump’s fabrications have frightening real-world ramifications. Indeed, a few hours after the press conference in which Trump suggested that election interference was occurring in Philadelphia, the city’s police interrupted an alleged plot to attack a building where votes were being counted. Police arrested two men and seized an undisclosed number of weapons. Their vehicle was reported to have been adorned with stickers promoting QAnon, a far-right conspiracy theory which the president has often platformed.

“Trump lies as he breathes,” said Goodman. “It is a terrifying spectacle to watch this man give a speech from the people’s podium.”

Goodman told Solomon Wood that this last-minute desperation tracks with the fact that the stakes for Trump are perhaps higher than ever: “He could go from the presidency to prison.”

The hour-long interview with Goodman, a veteran investigative journalist renowned for her reporting on East Timor’s independence movement in 1991, focused on what the next four years hold for the U.S. While the election remained undecided, Goodman reflected on the president’s disastrous reign that has culminated in the deaths of over 230,000 Americans during the COVID-19 pandemic.

Goodman said the United States’ staggering pandemic numbers can be attributed to Trump’s “complete incompetence and malevolence,” pointing to the president’s super-spreader campaign events. “We have 20 percent of the deaths and infections, and yet our population… is a little over four percent of the world’s population,” said Goodman.

Though they are dependent upon concrete election results and the president’s own compliance with a peaceful transfer of power (which he has often failed to guarantee), the next four years in the U.S. could be marked by a sea change in success for activists and organizers across the country. Goodman said this might be spurred by the differences between Trump and Democratic presidential candidate Joe Biden, positing that while Biden represents the centrist establishment, his opposition to social justice movements may be less vehement—or at least less delusional.

“President Trump represents a wall,” said Goodman. “What Biden represents is, I think, a door. He’s not willing to fully open [it]. It’s up to people, the pro-democracy movements in the United States, to kick that door open. Otherwise, it will be slammed shut, and be the equivalent of that wall.”

Goodman also noted that while Trump’s “vile” and “crude” rhetoric and policies might be erased, the cruelty embedded in U.S. politics neither end nor begin with this president. “President Obama spoke of all people as having dignity and his language was deeply respectful, but he deported more immigrants… than Donald Trump has,” said Goodman. “Biden was his partner.”

But Biden’s politics aren’t the rule in the Democratic party. The beloved representatives known as The Squad—Alexandra Ocasio-Cortez, Ilhan Omar, Ayanna Pressley, and Rashida Tlaib—lean left. This quartet and others on their beat have four more years to push the Democrats’ needle away from centrist policy and toward meaningful, material change like the Green New Deal and Medicare for All. All of them stand outside of the Democratic establishment, said Goodman.

Outside of Capitol Hill, too, grassroots progressive movements continue to gain momentum after having made historic gains this summer, most notably via organizing by Black Lives Matter and the movement to defund and abolish police forces across the U.S. and Canada. These successes—and the consolidation of grassroots, community power that they suggest—are worth celebrating.

“The silver lining of these years has been the growth of movements both in the streets and in the hallowed halls of Congress,” said Goodman.

Media has a critical role to play in the sustenance and equity of these movements. Goodman chastised the rehabilitation of former government officials, in particular from the George Bush administration, via cushy pundit positions on major network television. If the media is to truly act as a tool of democracy rather than fascism, it must itself be rehabilitated via a shift from centering elite ‘experts’ to platforming the voices of those with lived experience and expertise.

“If you have someone speaking from their own experience, whether it’s a Palestinian child or an Israeli grandmother, whether it’s an uncle on the Standing Rock Reservation in North Dakota fighting the Dakota Access pipeline, or it’s an aunt in Afghanistan, you begin to understand where they’re coming from,” said Goodman.

To underscore the point, Goodman shared the story of the creation of Democracy Now!’s parent company Pacifica Network, a progressive media outlet built to push back against corporate-run media. In 1970, the Ku Klux Klan bombed the network’s Houston station in response to its progressive, pro-democracy approach. The station was restored and then bombed again, in the middle of an Arlo Guthrie song. This violent silencing resonates today—as does the attendant imperative to fight back.

“Why did the Klan want Pacifica destroyed?” posed Goodman. “[They] understood how dangerous independent media is because it allows people to speak for themselves… We are all interdependent. We need a medium that reflects the voices of people on the front lines, not that minority elite.”

Apparantly she hasn't read the 'Biden Plan' on the environment. It's pretty much the Green New Deal.