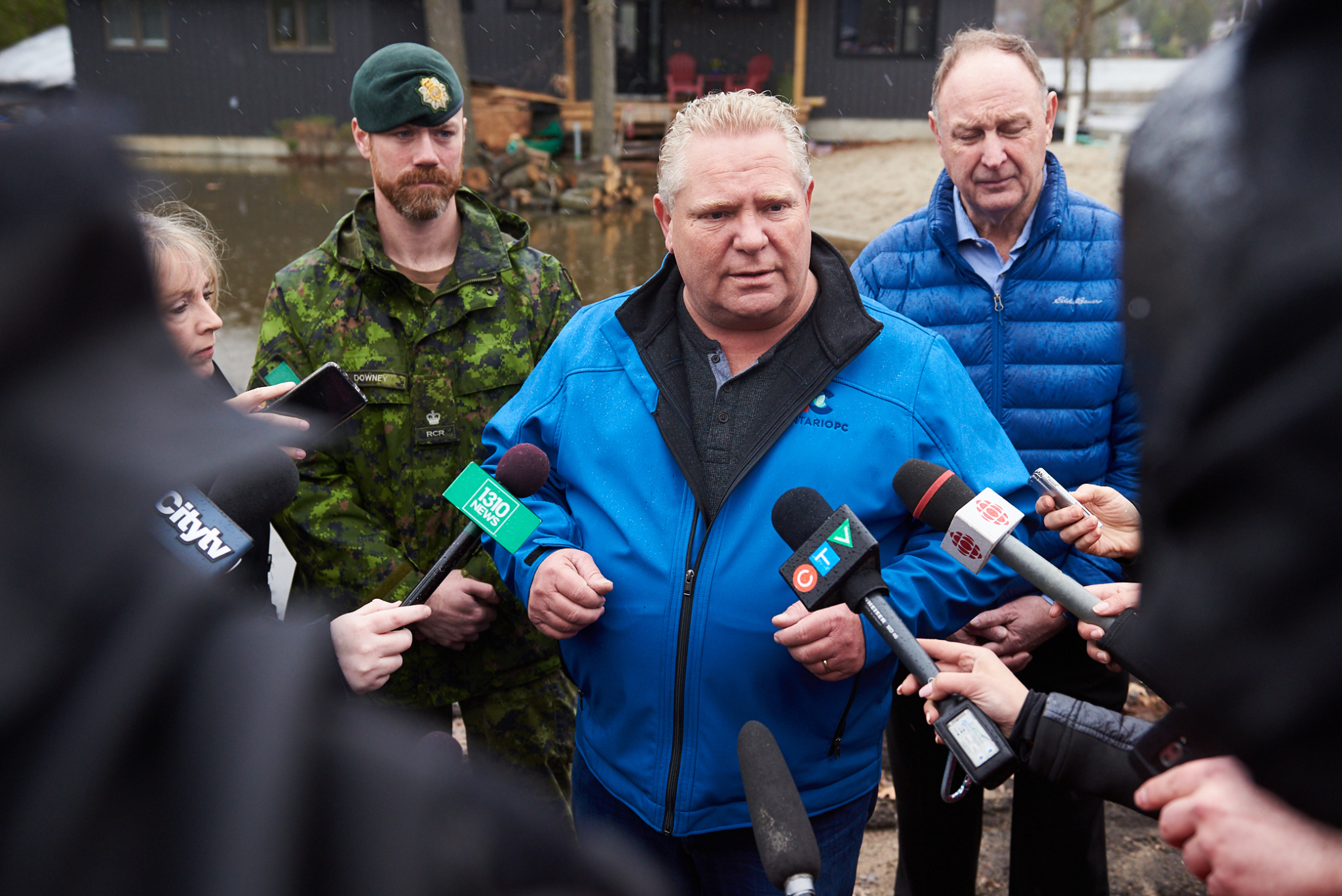 Ontario Premier Doug Ford tours flooding in the Ottawa region in 2019. Now, the Ford government is making changes to how the agencies that oversee watersheds and flood mitigation work. File photo by Kamara Morozuk
Previous story
Next story

The Doug Ford government is rewriting the rules for agencies that protect Ontario watersheds, undermining their powers and allowing developers to skip checks and balances, environmental advocates say.

The changes to the rules governing them undermine the agencies’ ability to ensure development in flood-plains is done safely, said Conservation Ontario, a non-profit representing the 36 conservation authorities.

The changes were nestled inside Bill 229, a bill introduced Thursday to enact measures the government outlined in its 2020 budget.

Ontario first created conservation authorities in 1946 after the province found that decades of poor planning had led to drought, deforestation, erosion and increased flooding. The current system was designed based on lessons learned in the wake of hurricane Hazel, which struck southern Ontario in 1954, killing 81 people and destroying homes that had been built on flood-plains. After the disaster, Ontario put conservation authorities in charge of flood forecasting and making sure development near waterways was done safely.

The Ford government’s rewrite of those rules would chip away at conservation authorities’ power, allowing the minister of natural resources to take over some decision-making on developments. It would also allow developers to appeal conservation authorities’ decisions directly to the minister, who could then overturn them. And it would take away the agencies’ ability to appeal municipal planning decisions they believe could be harmful for conservation.

“It is a problem because it politicizes a process that is not political,” said Ontario NDP environment critic Ian Arthur.

Conservation authorities oversee Ontario watersheds. Doug Ford's changes to how they work could allow developers to circumvent checks and balances brought in after hurricane Hazel in 1954, environmental advocates say. #onpoli

“The climate crisis is only going to worsen flooding,” he said. “It’s just so short-sighted and reckless.”

Reduced flood protections could also be a “huge liability and safety risk,” said Tim Gray, the executive director of the non-profit Environmental Defence.

“Anything that removes oversight from an ecological or flood hazard perspective has the ability to increase risk,” he added.

Andrew Buttigieg, a spokesperson for Ontario Environment Minister Jeff Yurek, didn’t directly answer when asked about concerns around flood mitigation and safety. But he said the new rules would “increase accountability, consistency and transparency by streamlining the land use planning process,” and that improving the governance of conservation authorities is part of the province’s flood mitigation strategy.

They have a special role in development: While a municipal government might be concerned about economic issues or the environmental impact within its boundaries, a conservation authority looks at the cumulative effects on entire watersheds, which can span hundreds of square kilometres. The authorities employ scientists who assess the impact of each project.

The new rules, if passed, would theoretically allow the province to overrule concerns raised by those scientists.

One example is a controversial development in Pickering, Ont., that would pave over a protected wetland. Though the TRCA hasn’t officially decided whether to issue a permit or not, it has said it doesn’t generally support projects on protected wetlands ⁠— if the TRCA decided to deny the permit, the new legislation would allow the Ford government to overrule it.

“There will never be an answer of no,” Gray said.

The TRCA is also concerned about the changes, and in a statement Friday called on “partner municipalities, residents throughout our jurisdiction, and our network of supporters” to reach out to the province on its behalf.

“We really want to be able to protect our watersheds,” Nelson said. “And being a major landowner in the GTA, we want to ensure that our public lands are also protected.”

Conservation authorities had been working with the province in good faith to streamline their permitting processes and tell the government what types of changes could be helpful, Gavine said.

“We’ve made great strides in improving turnaround times,” she added. “I believe that the changes that are being presented in the (new legislation) are not necessary in light of this improved work that we’ve seen.”

The legislation is likely to pass, since the Progressive Conservative government holds a majority.

It’s not clear what the full impact of the changes could be because the province has said it’s also writing a new set of regulations to go with the new rules, said Gavine. (Buttigieg didn’t answer when asked when the regulations would be finished.)

“I believe there’s other ways we could work co-operatively,” Gavine said.

“We fear that it’s going to impact our ability to look at the health of Ontario’s environment.”

Ford's performance as a COVID

Ford's performance as a COVID warrior in Ontario remains to be seen.
Ford's destruction of Ontario's already beleaguered Conservation efforts is well documented in the various slash and burn legislative changes he has introduced at the behest of the all-powerful and greedy development (industrial and residential ) sector, including the real estate barons. This legacy of mindless growth/get rich quick exploitation may well destroy the CPO's prospects for future electoral glory. Sure - right now people are hurting, unemployed, evicted, but these people are unlikely to profit from the party's measures to enrich the already gorged capitalists. In fact it drives another wedge into the widening income gap.