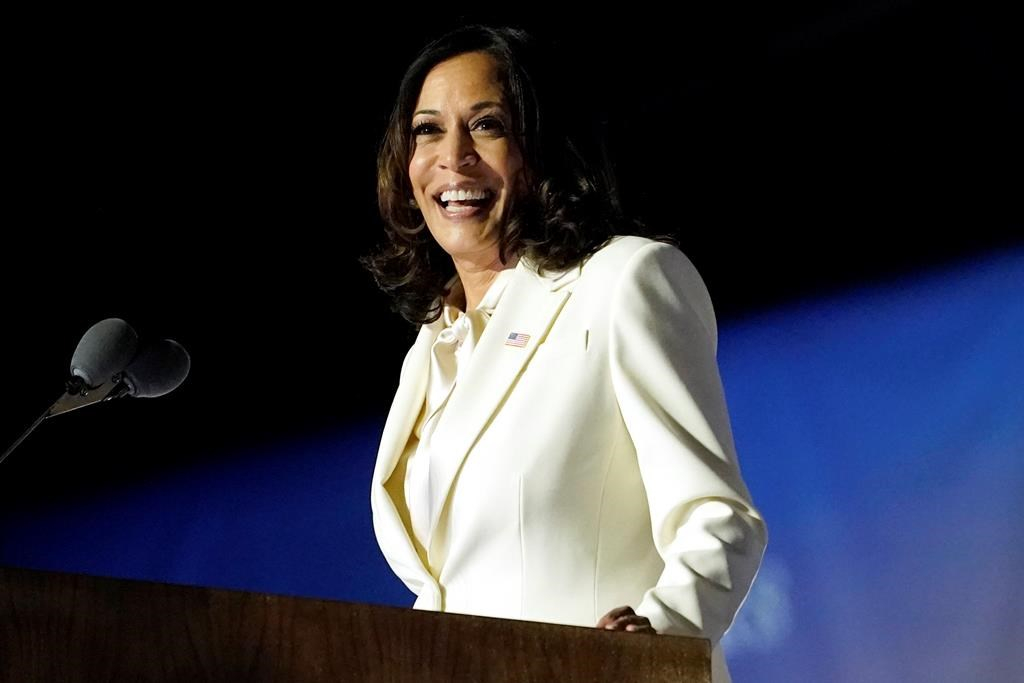 The election of Kamala Harris as vice-president of the United States will inspire more young Black women in Canada to engage in politics and run for office, says Velma Morgan, a Black Canadian activist based in Toronto.

Harris's father was born in Jamaica, her mother in India. She is the first woman and the first Black or South Asian person elected to the vice-presidency.

Through Morgan's work as the chair of Operation Black Vote, a not-for-profit, multi-partisan organization that aims to get more Black people elected at all levels of government, she supported Annamie Paul in her bid for the Green party leadership.

"The combination of those two (Harris and Paul), young girls are seeing themselves," Morgan said in an interview.

"Representation does matter," she said. "You can't be what you don't see."

NDP Leader Jagmeet Singh, who became the first person of colour in Canada's history to run for prime minister during the 2019 election, said Harris's election will encourage a future generation of Canadian women to get involved and run in elections.

"Each person who breaks a barrier inspires more people," he said in an interview.

"We're only here today because of the people who broke barriers before us."

Singh said he was happy about — and proud of — the positive impact he had on young people of colour in Canada during the election campaign last year.

"Young kids would come up to me and literally tell me, 'Thank you. Seeing you running for prime minister makes me feel like I could do anything,'" he said.

Liberal MP Greg Fergus, who is chair of the parliamentary Black caucus, said there is a need to elect more Black people to the House of Commons.

The election of Kamala Harris as vice-president of the United States will inspire more young Black women in Canada to engage in politics and run for office, says Velma Morgan, a Black Canadian activist based in Toronto. #KamalaHarris

Fergus said there has been some progress, but the number of Black MPs do not yet represent the "democratic weight" of the Black population in Canada. According to the 2016 census, there were just under 1.2 million Black people in Canada, making up 3.5 per cent of the country's population.

"We're giving them the tools to participate, whatever way they want to participate, whether it's to run, or to volunteer or to just help out," she said. "We've been trying to get the word out to say, 'You know what, we're here, there's not a lot of us, but we can change that by bringing a lot more people on.' "

NDP MP Matthew Green, a Black person representing the riding of Hamilton Centre, remembers in 2008 when he gathered with his community to celebrate the election of Barack Obama as the first Black president of the United States.

But he said the goal shouldn't only be to achieve representation and reflect the diversity of the population. It should also be to achieve inclusion and equity.

"Having diverse people, women elected, for me personally, is only important if their legacy is dismantling the barriers that they faced to get there," he said.

He said people have traditionally been privileged in Canada by race, gender and economics.

"(The system is) disproportionately, advantaging white men … that still remains a fact," he said.

"As a city councillor, the first elected person of African-Canadian descent in my city's history, I was still racially profiled by police in my own community."

He said Harris — a former district attorney in San Francisco and then attorney general of California — was part of a system that also incarcerated and disenfranchised Black and Latino communities and low-income people throughout her career. What really matters, he added, is whether she will be able to help marginalized people break barriers.

Former MP Celina Caesar-Chavannes, who left the Liberal caucus several months before the 2019 election to sit as an Independent, said that claiming "diversity is our strength," as the Liberals often do, is misleading.

"Having people of different colours and different races or ideas within your systems or organizations does not mean that you're going to build strength if those people feel excluded," Caesar-Chavannes said in an interview Friday.

She said collective strength comes when Canadians make spaces inclusive, so racialized people can voice their ideas and feel like they belong.

"That for sure creates a system that is more fair and more just," she said.

Caesar-Chavannes, expected to detail her disillusionment with the Liberal brand of politics in her upcoming book, "Can You Hear Me Now?" to be published in February, said she's not optimistic.

"If we never address the root cause, and we keep putting Band-Aids on a situation, it's not going to get better," she said.

Singh said it's sometimes hard to understand that Canada has systems that are designed to exclude people.

"We look at the way the criminal justice system works, we look at the way policing works, and realize that there are systems in place that have to be changed because, right now, they're designed to discriminate," he said.

Some of these systems have to be changed and some have to be dismantled, he said. But he said he believes there's enough appetite in Canada for a person of colour to be elected prime minister.

This report by The Canadian Press was first published Nov. 14, 2020