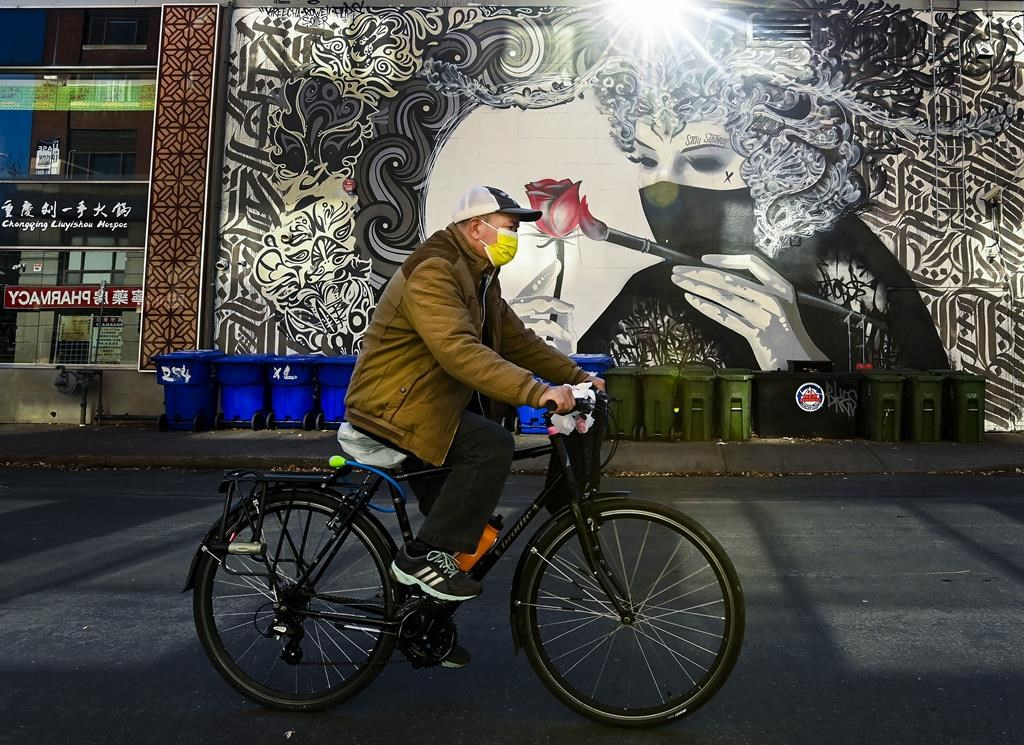 A man wearing a protective mask rides his bicycle past a face mask mural during the COVID-19 pandemic in Toronto on November 12, 2020. File photo by The Canadian Press/Nathan Denette
Previous story
Next story

Quebec Health Minister Christian Dube said the slight decline was "encouraging," but said ongoing vigilance around public health protocols will be critical if residents want to contain the spread of the virus.

"I think it's encouraging to see that we can have a good day, but it's going to take several good days," Dube told reporters during a Sunday morning news conference in Montreal.

"I'm going to let the next days bring us more good news, but in the meantime, we need to continue to follow safety measures," he said.

The virulence of the novel coronavirus was dramatically demonstrated in Nunavut over the weekend, where territory-wide case counts more than doubled over the past 48 hours.

The 10 new cases reported on Sunday, all linked to an outbreak in the community of Arviat, took the overall total to 18. Arviat's first positive diagnosis was only confirmed on Friday.

"Due to the number of cases of COVID-19 in Arviat, anyone ... who left the community on or after Nov. 2 is being asked to immediately isolate for 14 days wherever they are," territorial Chief Public Health Officer Dr. Michael Patterson said in a statement.

Canada's top doctor also urged residents not to let their guard down in indoor settings as winter approaches.

Dr. Theresa Tam has exhorted Canadians to be more proactive in their efforts to stem the spread of COVID-19 to prevent hospitals from being overwhelmed in the weeks ahead.

Despite the modest decline in several infection hot spots, numbers continued to soar in much of the country.

In Manitoba, new COVID-19 cases surged to 494 on Sunday compared to 237 the day before. The province reported 10 new deaths, seven of which were linked to an outbreak at a Winnipeg care home where dozens of residents have died.

Shortly after the province reported the spike in infections, Justice Minister Cliff Cullen criticized Manitobans who attended a rally on Saturday to protest against mandatory masks and other lockdown measures.

The event in Steinbach, Man., about 60 kilometres south of Winnipeg, was "incredibly unfortunate, dangerous and wrong," Cullen said in a statement.

He urged residents to follow public health guidelines and warned that law enforcement officers would ticket anyone found breaking the rules.

Premier Scott Moe said Sunday that more measures could be coming to fight COVID-19 in the province in addition to those already slated to take effect this week.

Effective Monday and for the next 28 days, masks will be mandatory in indoor public spaces in any community with more than 5,000 residents. Restaurants and bars must also stop selling alcohol by 10 p.m. and make sure everyone has finished their drinks by 11.

After the new measures were announced on Friday, hundreds of doctors who signed a letter earlier in the week urging stronger action penned a new missive saying the new rules don't go far enough.

This report by The Canadian Press was first published Nov. 15, 2020.

-with files from Rob Drinkwater in Edmonton and Shawn Jeffords in Toronto.