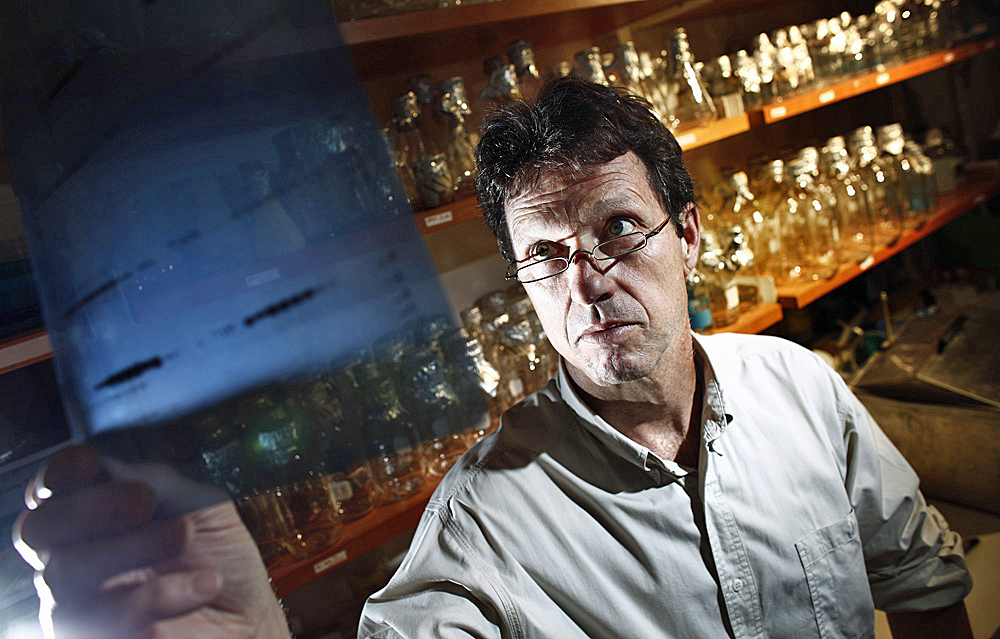 Whether the next pandemic is a coronavirus or flu doesn’t really matter, says retired professor Earl Brown. What matters is that the conditions for viruses to become deadly and jump onto the human species are everywhere. Photo courtesy of Earl Brown
Previous story
Next story

It’s tempting to think that viruses with pandemic potential emerge from the wilderness fully formed, waiting for some unlucky soul to bite into an infected bat and trigger the deaths of a million people, but evolution is rarely so lazy, and we may need to take more responsibility than once thought.

In his book, How to Survive a Pandemic, emerging infectious disease expert Dr. Michael Greger explains that most pandemics are caused by viruses and bacteria that begin in animals and leap onto us, so-called zoonotic infections. Smallpox, he writes, probably came from camels, whooping cough from pigs, typhoid fever from chickens, influenza from ducks, leprosy from water buffalo and some of the viruses that cause the common cold from cattle and horses. Something like 75 per cent of the viruses assaulting the human species originated in animals.

This is a consequence of proximity and time. The ailments listed above probably saw their origins only in the last 10,000 years, for as long as we have domesticated other species, bringing them into daily contact with ourselves and other livestock, and providing their viruses with new and untested hosts. The last ingredient is mutation.

The lungs of mice

Earl Brown is a retired professor in viral evolution from the University of Ottawa. In spite of the popular perception of viruses as indiscriminate aggressors, he said most have evolved to be harmless in their host of choice.

“They tend toward benign-ness,” as he put it during a recent phone interview.

The reasons for this are clear enough. Ducks are the original host of influenza, and if influenza made its host duck too sick to fly from pond to pond, the virus would fail to infect new ducks and disappear. But if influenza caused only mild symptoms, or had no impact on duck health at all, it could freely hitch a ride from pond to pond to pond, infecting the majority of the world’s ducks without the need to make them dangerously ill.

Humans have a viral equivalent: herpes. Brown said this virus has probably been with us since time immemorial. Its most successful form, oral herpes, lives comfortably in 95 per cent of our planet’s 7.8 billion people, occasionally presenting as cold sores, but otherwise avoiding scrutiny.

Viruses such as influenza are famously sloppy at reproduction, producing swamps of mutated offspring every time one cell becomes millions, the majority of these being too misshapen even to survive. The few faithful children, however, near enough to the ideal condition of their parents, carry on the species, and so the virus doesn’t end up changing much over time.

But when you take this mess of mutants (influenza in ducks) and bring them into contact with a new species (human beings), eventually one of those misfit children will be ideally suited to jump the species barrier, and once they’ve made the leap, their propensity for rapid mutation becomes a selective advantage, allowing them to settle down in their new host in whatever manner encourages their survival. Typically, this means evolving toward “benign-ness,” but not always.

We must dismantle the bomb that is factory farming in all its forms, @Zack_Metcalfe writes, whether that means returning to small herds and flocks raised outdoors on family farms or moving away from animal products altogether.

If a virus kills its host, it tends to die also, putting a natural limit on the virulence of things like influenza in ducks and herpes in humans. But what if that weren’t the case? What if a virus could destroy its host and still successfully spread? Such a scenario is rare in nature, so Brown created one in his lab.

He took a sample of human influenza (which has been with us since we domesticated ducks 4,500 years ago) and used an enormous dose to infect a mouse. As he described it, the virus did very poorly; the mouse in question hardly got sick. He then recovered this virus from the lungs of the first mouse and used it to infect a second mouse, which got a little sicker. He repeated this viral education through 10 mice, and by the 10th mouse, the virus was not only extremely infectious to mice, it had become lethal.

He’s repeated the experiment several times in his career and received precisely the same result — the predictable transformation of a nuisance virus in humans to a plague among mice. Remove the difficulty of transmission from one host to the next, and a virus can become an indiscriminate killer.

In the trenches, on the plate

But do such conditions of effortless transmission exist outside Brown’s lab? As argued by Greger in his book, and by others in the infectious disease community, the 1918 flu pandemic was triggered by just such an unnatural experiment.

When this particular brand of flu began to fester in the trenches of the First World War, it had no trouble at all leaping from soldier to soldier. These men were lacking in food and sleep, constantly wet, cold and wounded, their immune systems dampened by both the active and passive horrors of war. Even when the virus killed a man, his comrades couldn’t necessarily escape the body, and infections continued unabated. The result was evolutionarily inevitable, and not unlike the mice of Brown’s lab — the deadliest virus in human history.

It began as muscle aches and fever in its victims, and ended with bleeding from the eyes, ears and mouth, and then the vomiting of blood, blisters on the skin, lungs turned to jelly and other assorted horrors. Never before, said Brown, had a virus killed so many people in so short a time, raging around the globe twice in a single year before disappearing altogether for lack of new hosts. Fifty to 100 million people were dead.

The accidental experiment acted out in the trenches of the First World War was being repeated by the 1950s, this time with chickens. As demand for poultry began to increase and conditions of intense confinement became the norm in the early days of factory farming, chicken farms that became infected with influenza from ducks (an easy leap) generated viruses with extraordinary lethality in no time at all. Nowadays, we have biosecurity to frustrate the pandemic pathway somewhat, but the dense and intense confinement of factory farming has not only grown, it’s gone global.

Presently, one billion pigs, three billion ducks and a staggering 69 billion chickens (the three most commonly killed terrestrial animals in the world) are slaughtered annually to meet growing demands for meat. This has resulted in a steady swell of pathogenic viruses erupting in livestock and, following the rules of proximity, time and mutation, occasionally leaping onto human beings, bringing all their lethality with them.

“You can see it throughout agriculture,” said Brown. “If you want to read the infectious disease textbooks, they keep getting thicker and thicker.”

Nearly nothing mutates as quickly as coronaviruses, said Brown, themselves responsible for about 20 per cent of common colds. As a consequence, they are masters of change.

COVID-19, which began its conquest of humanity in late 2019, is very comfortable in humans, and the more people it infects, the better it adapts. This is why policies aimed at mass immunity through mass infection are so dangerous, and why back-to-school initiatives are so concerning. Right now, Brown said, COVID-19 is most dangerous to the elderly, whereas children under the age of 10 are half as likely to be infected as the general public and 80 per cent more likely to be asymptomatic. If schools lead to mass infection, however, Brown is concerned the virus will learn to better infect children. The more opportunities we present the virus to learn, the worse off we’ll be.

But where did COVID-19 come from? The closest wild viral relative found to date occurs in bats, but genetically, the wild virus and the modern human virus are only 96 per cent identical. This four per cent difference, said Brown, represents 50 years of evolution that have not yet been accounted for, but which did not occur in bats.

During a visit to the avian flu labs of the China Agricultural University, Beijing, in 2008, Brown heard stories of enormous captive breeding operations of “wild” animals for sale in the country’s wet markets.

“They said everything you can imagine is being grown in different barns in China,” Brown said. “They said, ‘We didn’t know the half of it.’”

This is where Brown suspects COVID-19 spent the last 50 years, passing from bats through the multispecies soup of confinement, degradation and eventual human consumption of wild animal captive breeding, all of which endowed this virus with pandemic potential. It cannot be said for sure, but COVID-19 might have been as inevitable as the 1918 influenza.

There is another, oft-underappreciated factor in the formation and spread of viruses with pandemic potential, and that’s the shifting epidemiology of humanity itself. In a single century, the majority of people globally have moved from open country to densely packed cities, and thanks to modern medicine, those who are elderly or immunocompromised have extended their lifespans by years or decades. There are more of us now than ever, closer together than ever and with more susceptible individuals than ever.

Whether the next pandemic is a coronavirus or flu doesn’t really matter, Brown said. What matters is that the conditions necessary for viruses to become deadly and to jump onto the human species are everywhere, and growing relatively unchecked. The factory farming of animals and the increased susceptibility of the global human population are two powder kegs that we’ve set right next to each other, and it would get much worse than COVID-19. The H5N1 flu virus, for example, forged from the factory farming of chickens, has a 50 per cent mortality rate when successfully transmitted to people.

Modifications to society that respect the inevitabilities of viral evolution are something to consider, said Brown, but we must also dismantle the bomb that is factory farming in all its forms, whether that means returning to small herds and flocks raised outdoors on family farms or moving away from animal products altogether by engaging with the vegan movement or the growing market of meat alternatives.

“We can all try to be more conscious,” Brown said. “We don’t have to eat as many (animals) as some people do. Sadly, this topic becomes very emotional and politicized, but if you want to talk practically, eating vegetables is safer than growing chickens.”