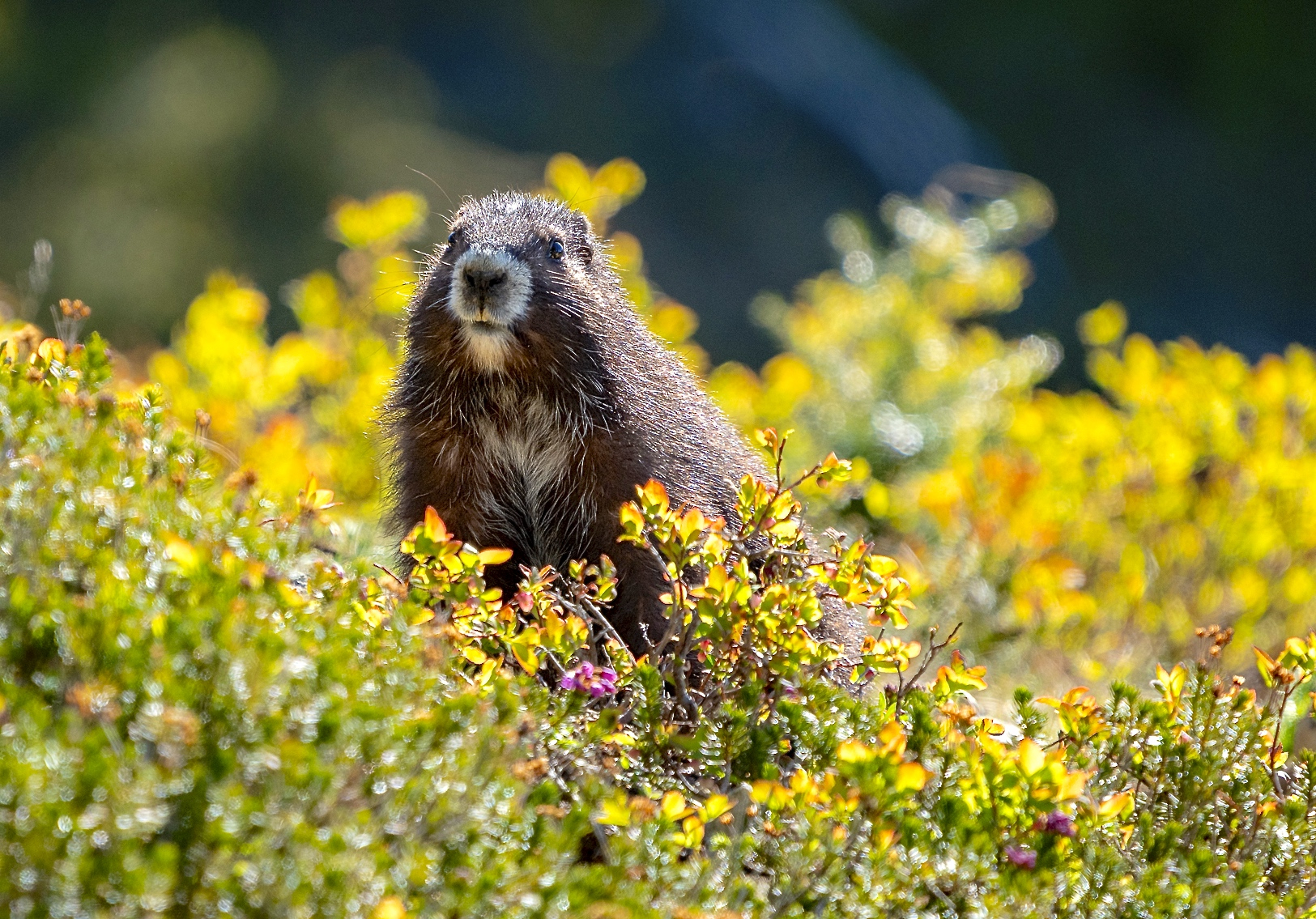 An endangered Vancouver Island marmot peeks its head out amid the alpine vegetation. Photo Ryan Tidman, courtesy of the Marmot Recovery Foundation
Previous story
Next story

Vancouver Island marmots may just be the antidote required for the dystopian times we are living in.

If you must be trapped inside during this current winter of discontent, alone at a desk, scrolling through hours of video — best it be watching one of the most endearing animals on the planet.

Researchers looking to conserve Canada’s most endangered mammal take advantage of the creature’s seven-month hibernation season to mine footage and field data for more insights that will help the animals survive, said Adam Taylor, executive director of the Vancouver Island Marmot Recovery Foundation.

The process does not get old over time, Taylor said.

After years of study, he still gets a kick out of watching the highly social, fuzzy, chocolate brown critters laze on rocks, munch the alpine vegetation or alternately tussle or boop noses with one another.

Caught on camera: a pair of yearlings practice for the future when they may have to defend their turf. #cameratrap pic.twitter.com/i4tuSQ51UN

“They are entertaining to watch. And there's no doubt about it, they are unbearably cute,” said Taylor.

The biologist describes the marmots as a good “gateway animal” to hook people into caring generally about the conservation of species at risk.

“We need success stories in the conservation world. This is not an easy time to work with wildlife,” says Adam Taylor, executive director of the Vancouver Island @MarmotRecovery.

“They are really good ambassadors,” Taylor said of this cat-sized member of the squirrel family.

“I hope somebody discovers the Vancouver Island marmot and then finds this world of other endangered species that also need our help.”

But for all their cuteness, the Vancouver Island marmot is a role model in resiliency, Taylor added.

Despite enduring a harsh climate, challenging conditions and changing habitat due the impacts of human activity, the marmots represent a potential good news story that illustrates the possibility of bringing a species back from the brink of extinction.

The critically endangered species has gone from a low count of just 30 wild marmots living in handful of locations in 2003 to approximately 200 living in colonies across 20 Vancouver Island mountains by 2019.

Through a captive breeding and release program in conjunction with the Toronto and Calgary zoos, habitat restoration and monitoring activities, the foundation and its partners have seen the Vancouver Island marmot repopulate areas where it was completely extirpated, Taylor said.

The last two years have resulted in a combined population of more than 100 pups born in the wild, he said.

“So to that extent, yes, we’ve had success,” Taylor said.

“I think there's reason for real optimism, that we have some science and some modelling that is demonstrating that we have an approach that can bring this species back.”

But he was very cautious about labelling the recovery effort as a definitive triumph of any sort.

“And if we walked away today, the species would absolutely fly back into extinction very quickly.”

The Vancouver Island marmot population is still growing slowly and is extremely vulnerable to damaging bouts of predation from wolves and cougars that can more easily access colonies along the logging roads puncturing high alpine forests.

And the ever-present danger of starvation during or following hibernation is being exacerbated by climate change as the snowpack drops and spring melts quicken, limiting the supply of vegetation the marmots rely on, he said.

As well, a colony’s ability to rebound after any significant population loss can be hindered if the animals’ travel routes to each others' communities are severed or disrupted by industrial activity or projects, Taylor said.

The foundation must still assist the marmots to boost their recovery, he noted.

Just before and following hibernation, the foundation provides the marmots — which can lose one-third of their weight during their winter snooze — with supplemental vegetation biscuits to fatten them up and improve reproduction rates.

Plus, the captive-bred marmots are subject to a halfway house approach when being released into the wild.

The marmots appear to have a better survival rate when they are released on Mount Washington and its attendant ski runs for their first year in nature before being recaptured and released into more challenging environments in areas such as Strathcona Park, Taylor said.

The practice seems to condition them to a natural environment and has boosted their survival rates five-fold, he said.

It does seem counterintuitive that such a highly modified habitat would benefit the marmot, especially given the negative impacts human activity has posed in the past, Taylor agreed.

But the ski hill’s operators avoid activities that might endanger the marmots, prevent tree growth on the runs, which mimic the avalanche slopes favoured by the critter, and the constant presence of humans deters predators, he said.

“Hindsight is 20/20. But if you look at a ski hill, it looks exactly like marmot habitat,” Taylor said.

“And at the absolute lowest point, when we had fewer than 30 Vancouver Island marmots left in the wild, 10 of them were living at that ski resort.”

The recovery effort eats up a good chunk of money and time, Taylor said.

But Canadians should feel a responsibility to protect it, he said.

“We have a moral obligation,” Taylor said, adding the Vancouver Island marmot is one of only five endemic species to Canada and the only one at risk.

“But asking how the world would be different if we lost the Vancouver Island marmot is in some ways the wrong question,” he said, noting it nearly happened once before without many people being aware of the fact.

However, saving the Vancouver Island marmot is also critical for reasons outside their own survival, Taylor stressed.

The world is facing massive declines in biodiversity and a growing list of species bordering extinction, he said.

The marmot can offer a portion of hope in this doomsday scenario, Taylor said.

“We need success stories in the conservation world. This is not an easy time to work with wildlife,” he said.

“We need to be able to demonstrate that it's possible to bring these species back because that's the task that we're going to be engaged in more and more often. And if we don't have success stories, then it's going to be really hard for us to justify why we want to save any one of these species.”

It's a stressful world right now. I don't know how extra marmot pictures will help, but I feel that they will. Here's Hulk from Mt Arrowsmith. Photo by Ryan Tidman. pic.twitter.com/lB2wcILStj

Without fast action from Canada and the U.S., North American right whales could perish