Fossil fuels will decline but, unless Canada takes action, remain a big player in Canada's energy use by 2050: report 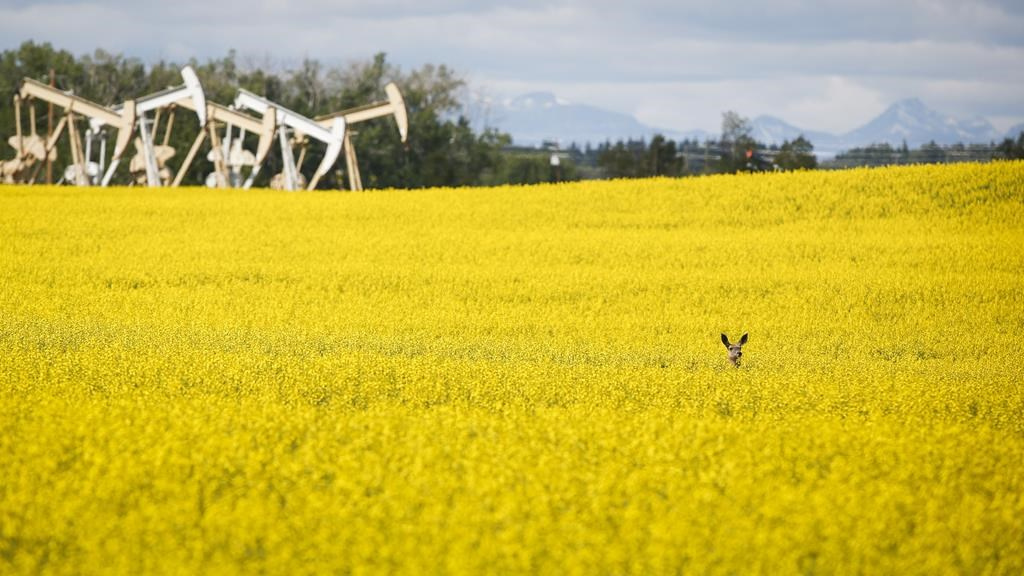 Pumpjacks draw oil out of the ground as a deer stands in a canola field near Olds, Alta., on Thursday, July 16, 2020. File photo by The Canadian Press/Jeff McIntosh
Previous story

The Canada Energy Regulator says reaching net-zero emissions over the next 30 years will require a much more aggressive transition away from oil and gas.

The annual Energy Futures report released Tuesday comes just a few days after the federal government tabled a bill to enshrine into law its target to reach net-zero emissions by 2050.

But the report projects that even with many more policies to curb emissions than are currently in place, oil and gas would still make up nearly two-thirds of energy sources three decades from now.

"Achieving net-zero (greenhouse gas) emissions by 2050 will require an accelerated pace of transition away from fossil fuels," the report says.

Net-zero means either no emissions are produced, or any that are produced are absorbed by nature or technology so no more are added to the atmosphere, where they contribute to global warming.

Regulator CEO Gitane De Silva told The Canadian Press in an interview that the goal of the report isn't to comment on existing policy, but to paint a picture of where things could go using a variety of assumptions.

"Really, our hope is that this information will help inform that policy process going forward," she said.

The 104-page report looks at two potential scenarios for energy use in Canada. One involves using only the climate policies already in place. Another "evolving scenario" adds in the impacts of expanding those policies, including hiking the carbon tax, lower market prices for oil and gas, and lower costs to transitioning to renewables like wind and solar.

The current carbon tax is to stop rising in 2022 at $50 per tonne of emissions produced. The government is to review it at that point. The regulator's report looks at what would happen if the carbon tax was hiked to $125 a tonne by 2050.

Reaching net-zero emissions over the next 30 years will to require a much more aggressive transition away from oil and gas. #cdnpoli #ClimateChange #GHG #climatecrisis

Under the status quo scenario, demand for oil and gas remains relatively stable over the next three years.

Canada currently gets about one-sixth of its energy from electricity, about 20 per cent of which comes from burning fossil fuels.

In the evolving policy scenario, the report projects electricity will generate more than one-quarter of Canadian energy by 2050, and that fossil fuels will provide about 10 per cent of that.

Darren Christie, the chief economist at the Canada Energy Regulator, says COVID-19 added much more uncertainty to this year's projections, because fuel consumption and production fell substantially during the pandemic restrictions.

He says it's also not entirely clear how, or if, the country's work and commuting habits will return to the pre-pandemic normal.

"It really changes our starting point," he said.

Overall energy use is down six per cent because of the pandemic, and oil production in Canada is down about seven per cent.

The evolving scenario projects that crude oil and natural gas production will both grow between 17 and 18 per cent by 2039, but will then start to fall, dropping seven or eight per cent by 2050.

De Silva notes that if the three oil and gas pipelines under construction get finished — Keystone XL, Trans Mountain and Enbridge Line 3 — they will together be the final pipelines Canada needs to build to handle the projected growth and fossil fuel production before it begins to decline.

The report suggests Canada will also have to seriously pick up the pace on electric vehicles to meet its current targets. Even under the evolving scenario, the report projects only half of the passenger vehicles sold will be electric by 2050, a decade after Canada wants them all to be electric.

The large driver in that is the cost of electric-car batteries, said Christie.

Misleading Headline: "Fossil fuels to decline but remain big player in Canada's energy use by 2050: report"

As the article points out, the CER sets out various scenarios based on different policy directions. The CER, IEA, and EIA make projections, not predictions or forecasts. Our climate policy decisions and emissions trajectories are up to us. Not set in stone. Not inevitable.
1st sentence: "The Canada Energy Regulator says reaching net-zero emissions over the next 30 years will require a much more aggressive transition away from oil and gas."
That pathway is entirely possible, if we decide to take it.

Fossil fuel boosters frequently cite IEA "predictions" and "forecasts". Typically, they refer only to the first (or base) scenario and fail to mention the others. The first scenario (Current or Stated Policies) leads to climate disaster. Which the oil lobby conveniently fails to mention.
*
The oil lobby distorts IEA reports by rebranding scenarios as "predictions" and "forecasts".
IEA's World Energy Outlook scenarios are NOT predictions. The IEA does not make predictions about the future.
The most recent IEA report (Oct 2020) cited by the War Room sets out four possible scenarios based on different policy directions and emissions trajectories. Projections, not predictions. Which path we choose is up to us.
IEA: "The world energy outlook does not offer a forecast of what the energy system will look like but instead presents various projections to 2040 based on different policy assumptions, in order to give policy makers the tools to decide what path to follow."
*
"Commentary: Understanding the World Energy Outlook scenarios"
https://www.iea.org/newsroom/news/2019/october/understanding-the-world-e...
"Today’s energy choices will shape the future of energy, but how should we assess their impact and adequacy? This is the task the World Energy Outlook takes on. It aims to inform the thinking of decision makers as they design new policies or consider new investments. It does so by EXPLORING POSSIBLE FUTURES, the ways they come about and some of the main uncertainties – and it LAYS OUT THE CONSEQUENCES OF DIFFERENT CHOICES FOR OUR ENERGY USE, energy security and environment.
"One key element of this is to ASSESS WHERE THE GLOBAL ENERGY SYSTEM IS HEADING, BASED ON THE POLICY PLANS AND INVESTMENT CHOICES WE SEE TODAY. A second is to assess WHAT WOULD NEED TO BE DONE DIFFERENTLY IN ORDER TO REACH THE CLIMATE, ENERGY ACCESS, POLLUTION AND OTHER GOALS that policy makers have set themselves.

"While carbon emissions have flattened in recent years, the report finds that global energy-related CO2 emissions increase slightly by 2040, but at a slower pace than in last year’s projections. Still, THIS IS FAR FROM ENOUGH TO AVOID SEVERE IMPACTS OF CLIMATE CHANGE.
"The world energy outlook does not offer a forecast of what the energy system will look like but instead presents various projections to 2040 based on different policy assumptions, in order to give policy makers the tools to decide what path to follow. The main case is called the New Policies Scenario, and it models current and announced energy policies, including those in the Paris Agreement. This year, the report introduces the Sustainable Development Scenario, which offers an integrated way to achieve a range of goals: climate stabilization, cleaner air and universal access to modern energy." (2017)
• www.iea.org/newsroom/news/2017/november/a-world-in-transformation-world-...

IEA: "Regardless of which pathway the world follows, climate impacts will become more visible and severe over the coming years, increasing the pressure on all elements of society to find solutions. THESE SOLUTIONS CANNOT BE FOUND WITHIN TODAY'S OIL AND GAS PARADIGM."
IEA World Energy Outlook special report: "The Oil and Gas Industry in Energy Transitions" (January 2020)
• https://www.iea.org/reports/the-oil-and-gas-industry-in-energy-transitions

Here's what else the IEA has to say: The world has more fossil fuel reserves than it can afford to burn:
"No more than one-third of proven reserves of fossil fuels can be consumed prior to 2050 if the world is to achieve the 2C goal, unless carbon capture and storage (CCS) technology is widely deployed."
World Energy Outlook 2012
• www.iea.org/publications/freepublications/publication/English.pdf