Liberals commit to carbon-pollution target of net-zero by 2050 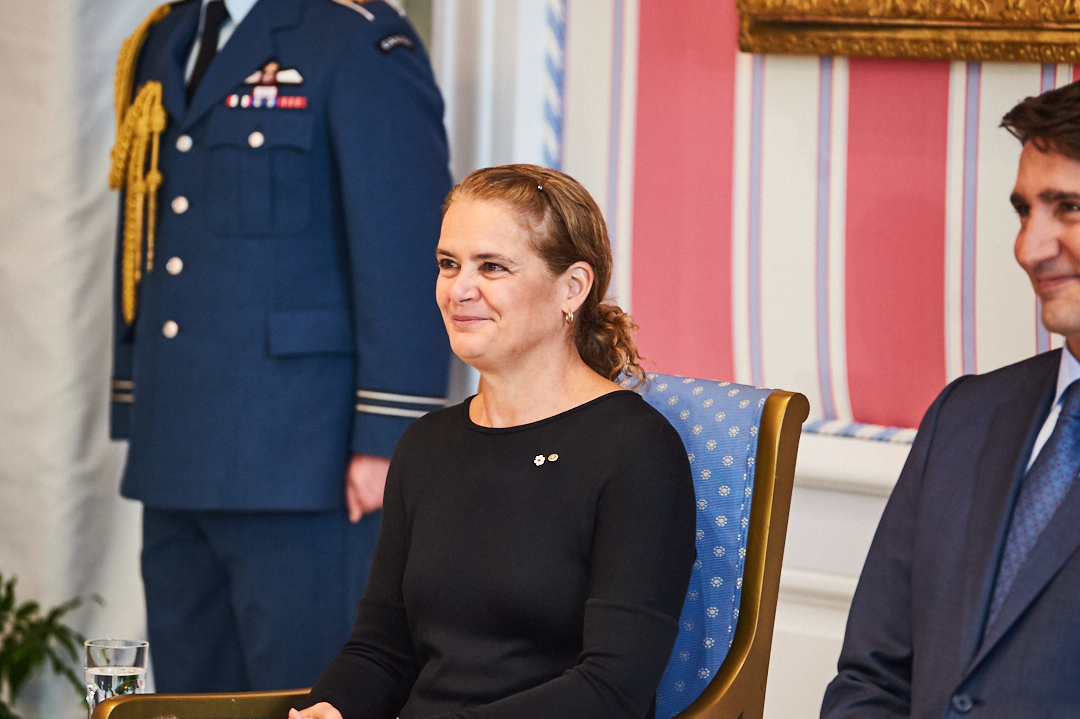 Governor General Julie Payette sits at the swearing-in ceremony for the cabinet on Nov. 20, 2019. Photo by Kamara Morozuk
Previous story
Next story

The Trudeau Liberals will attempt to move forward on their campaign promises of setting a target of “net-zero” carbon pollution by 2050, planting two billion trees and protecting a quarter of Canada’s oceans and land.

Governor General Julie Payette revealed these and other details in her speech from the throne in Ottawa on Thursday. She did not get into specifics about how exactly the government plans to zero out the 592 megatonnes of greenhouse gases Canada is projected to emit by 2030.

The government made it clear that it plans to continue with its carbon-pricing system, in the hopes of making it more costly to pollute and so depressing emissions over time. But Payette did not spell out precisely how the carbon price will be raised beyond the Liberals’ current plans to bring it to $50 a tonne by 2022.

There was also a nod to continued government support for the expansion of the fossil fuel industry, which produces the largest proportion of Canada’s carbon pollution, with Payette stating the government will work “just as hard to get Canadian resources to new markets” as it does on fighting the climate crisis.

“Canada’s children and grandchildren will judge this generation by its action — or inaction — on the defining challenge of the time: climate change,” Payette said, according to prepared remarks.

“From forest fires and floods, to ocean pollution and coastal erosion, Canadians are living the impact of climate change every day. The science is clear, and it has been for decades.”

After the speech, Bloc Québécois Leader Yves-François Blanchet indicated he would support the government’s priorities, meaning if the speech leads to a vote of confidence in the minority Parliament, it will pass with Bloc support.

Can Canada have it both ways on climate?

Environmental experts who spoke with National Observer following the speech acknowledged the government did make a point of emphasizing climate action as part of its priorities.

But they also argued it was not good enough for the Liberals to continue their pursuit of cutting carbon pollution in the transportation, building, electricity and other sectors and yet allow oil and gas emissions to continue to rise.

“We’ve seen three decades of failure on climate change because of that approach. Canada can either decide to be a climate leader, or it can decide to expand oil and gas. It cannot do both,” said Dale Marshall, national program manager at Environmental Defence.

Keith Stewart, senior energy strategist with Greenpeace Canada, said the government faces a stark choice as it tries to help workers in the fossil fuel sector who are suffering.

“The question is, will they try and address that by approving (Teck Resources' $20-billion, 260,000-barrel-per-day open-pit oil mine), and trying to build more pipelines? Or by a comprehensive transition that helps move Canada off fossil fuels, while treating those workers and communities fairly?” Stewart said.

The throne speech, however, did show that the government acknowledges it has a clear mandate from Canadians to do more on climate, said Merran Smith, executive director of Clean Energy Canada.

This level of commitment was “more than we’ve seen in the past,” she said. “The fact is that there is a global energy transition happening; I think we are all watching it happen faster than anybody predicted,” Smith said.

“When you look at the pace of electric vehicles, the costs are going down — there are more models than was anticipated — and the cost of batteries is going down far faster than expected.”

Smith said she took from the speech that the government would be focusing on preparing Canada for a low-carbon economy — and that this would be one area where the parties in a minority Parliament could work together.

“That’s the right choice, because there’s lots of jobs to be had as we build out our clean-energy sector,” Smith said.

Catherine Abreu, executive director of Climate Action Network Canada, said it was clear after four years of Liberal climate action, “they still have work to do, putting the puzzle together.”

"Getting to net-zero by 2050 is going to take measurable, near-term goals, a stronger interim 2030 target and accountability mechanisms to keep Canada on track,” Abreu said.

“It’s also going to take a real plan to diversify Canada’s economy away from high-emitting sectors like oil and gas while generating good, green jobs. That means redirecting government dollars away from fossil fuel subsidies and toward climate solutions. We did not hear about these elements today."

Payette said the government will “set a target to achieve net-zero emissions by 2050,” an “ambitious but necessary” goal for both economic growth and environmental protection.

That is in line with what Prime Minister Justin Trudeau promised to legislate during the fall federal election. The Liberals said the “net-zero” aspect “means some sectors could still emit carbon pollution, but these emissions would be offset by other actions.”

The global scientific consensus, as stated by the Intergovernmental Panel on Climate Change (IPCC), is that emissions must drop to zero by mid-century in order to have a decent shot at limiting global heating to 1.5 C above pre-industrial levels, and avoiding more extreme consequences of climate change.

But the IPCC has also said global carbon pollution has to plummet to 45 per cent below 2010 levels by 2030. Meanwhile, a recent United Nations emissions-gap report said Canada’s emissions in 2030 would actually be 15 per cent above its official reduction target.

Another recent report by the Global Carbon Project has also found carbon pollution has actually been rising globally, not falling, since the Paris climate accord, and is expected to go up again by 0.6 per cent in 2019.

The Governor General also said the government will “continue to lead in ensuring a price on pollution everywhere in this country, working with partners to further reduce emissions.”

Environment and Climate Change Minister Jonathan Wilkinson told The Canadian Press on Wednesday that the Liberals would put off making a decision on where the carbon price would go beyond $50 a tonne for at least another two years.

He said his first priority would be figuring out how Canada will meet its current target under the Paris agreement of 30 per cent below 2005 levels by 2030. He will then figure out a new, tougher emissions-reduction target in time for the next United Nations climate change conference in late 2020.

It will also “continue efforts to reduce plastic pollution,” which would build on the government’s promise in 2019 to ban single-use plastics by 2021 and move toward implementing a “zero plastic waste” strategy.

In addition, the government committed to providing “help for people displaced by climate-related disasters," another campaign promise.

“And while the government takes strong action to fight climate change, it will also work just as hard to get Canadian resources to new markets, and offer unwavering support to the hard-working women and men in Canada’s natural-resources sectors, many of whom have faced tough times recently.”

Scheer slams speech as a disappointment

While Blanchet signalled the Bloc's tentative endorsement, Conservative Leader Andrew Scheer emerged saying Conservatives were “very disappointed” and would be moving an amendment on Friday that he said would “highlight” gaps in the government's priorities.

There was “nothing about our energy workers in Alberta and Saskatchewan” in the throne speech, Scheer said, despite Payette’s line about getting Canadian resources to new markets.

“Today's throne speech was, I believe, an insult to the people of Alberta and Saskatchewan for not recognizing the anger and resentment that exists there,” Scheer said.

He did, however, allow that the government’s commitment to working with businesses to “make Canada the best place to start and grow a clean-technology company” was a worthwhile endeavour.

NDP Leader Jagmeet Singh said he didn't want to put Canada back into an election, but "at this point in time, we are not satisfied.”

“We need real action” on fighting the climate crisis, Singh said, but it was not what he heard in the speech. “I want government to work for people, and I want to solve the problems that people have told me about.”

The Green party's interim leader, Jo-Ann Roberts, said the speech contained "no surprises" and the party was "disappointed by the lack of specifics and timelines in many areas."

"While the Green party applauds the government for acknowledging the call by Canadians to address issues like climate change, health care, housing affordability and Indigenous rights, we are disappointed in the lack of urgency demonstrated in the absence of details."

(Editor's note: This story was updated at 8:01 p.m. Eastern on Dec. 5, 2019, to include reaction to the speech from various individuals.)

A 2050 target is way too far off when we have been warned we have a decade to make dramatic reductions, or potentially trigger devastating cascades of heating events, from which we can't recover. Let's see a 2021 target that's ambitious, and then a new target every 2 years that ratchets down our emissions rapidly. By 2050 we'll be totally hooped, given the endless heel-dragging and hypocritical flowing of subsidies to fossil fuel interests, of the current climate dawdlers in government.

In my municipality, we've seen the debacle of our elected government debating whether they should soften their targets, because they keep failing to meet them. That's a special kind of reverse logic, for the chronically irresponsible.

Someone please point out to those pollsters that claim two thirds of Canadians voted for pipeline-supporting parties: Many of us had no choice, having been robbed of the chance to vote for a party with a serious platform on climate, due to Trudeau's purposeful failure to bring in electoral reform. On pipelines, Libs and Cons are Dumb and Dumber, and one should not conclude a vote for Dumb, to keep Dumber at bay, represents buy-in to the moral cravenness and stupidity of advancing pipelines.

Year by year, our risks will rapidly escalate, and none of us will be grateful to governments which blew their opportunities to make a difference when they could have. Everything good is literally at stake.

Promises, promises and more promises.............
.....There was also a nod to continued government support for the expansion of the fossil fuel industry, which produces the largest proportion of Canada’s carbon pollution.... huh?

Two observations on the big

Two observations on the big picture.

First, the problem with working together on a shared goal is that the overall results can be hijacked by one bad actor. So if 188 countries meet their net-zero goal but (for example) the US decides to expand emissions for economic growth then the whole planet loses. If we need planet earth to hit net-zero in 2050 (for example) then countries representing a significant portion of emissions better put in place plans to overshoot their targets.

Second, let's be clear about the goal. "Net zero in 2050" means we will (to the extent we understand planetary ecological processes) stop making things worse starting in 2050. This is based on science to hold warming at 1.5C that is about a decade old, so this is also saying "we will wait until the last possible moment to be held to our commitments". Given that most predictions are coming true years earlier than they were supposed to (which probably has something to do with humanity consistently emitting more GHGs than we were supposed to), we need more ambition sooner if we are to have a decent chance at this probably inadequate long term goal.