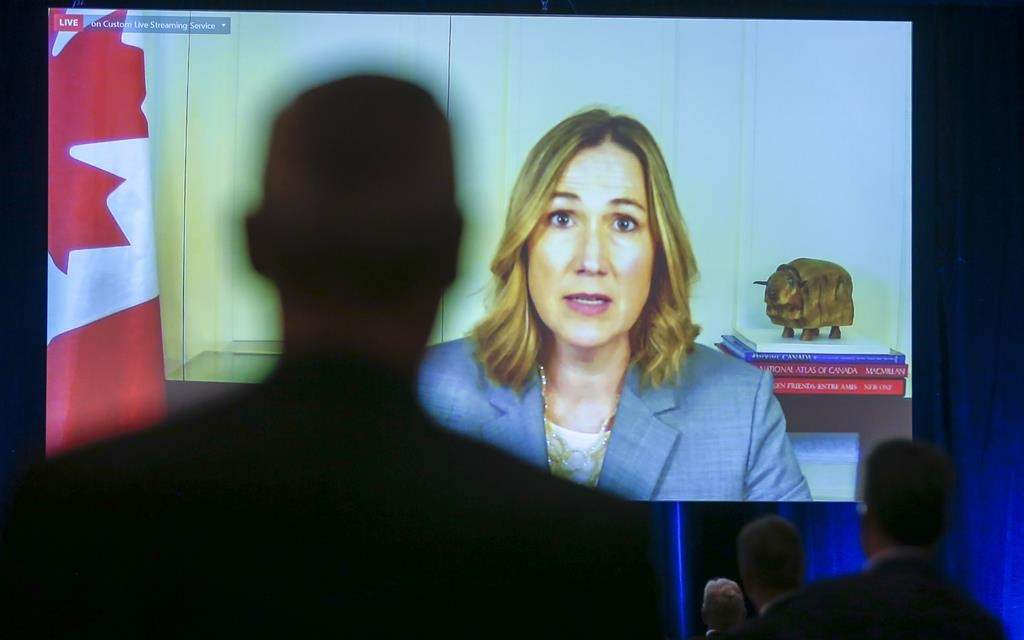 Canada's Ambassador to the United States Kirsten Hillman speaks via video link at the Global Business Forum in Banff, Alta., on September 24, 2020. File photo by The Canadian Press/Jeff McIntosh
Previous story
Next story

President-elect Joe Biden's new climate envoy may be the same person who nixed the Keystone XL pipeline expansion in 2015, but the project itself has evolved significantly since then, Canada's U.S. ambassador said Tuesday.

Biden's choice of John Kerry as a special presidential adviser on climate might seem to be the stake through the heart of the undead $8-billion pipeline, considering the former secretary of state was the one swinging the hammer five years ago.

Kirsten Hillman, however, doesn't see it that way.

"Times have changed," the ambassador said in a conference call after a panel discussion hosted by the Montreal Council on Foreign Relations.

"The project itself is not the same project; the company itself, (TC Energy), has made enormous innovations; and the sector is enormously innovative — they're cutting their emissions in important ways."

Canada, too, has evolved since then, she said, having established a long-awaited carbon-pricing system and committed to virtually eliminating emissions in 30 years — a target enshrined in legislation introduced just last week in the House of Commons.

"So regardless of who we will be talking to, we will bring our facts to that conversation."

Moments after Hillman finished speaking, Kerry took the podium in Delaware, where Biden was introducing his newly named senior cabinet appointees, and promptly framed his job as an aggressive foreign-policy endeavour.

"To end this crisis, the whole world must come together," Kerry said, predicting that next year's UN climate conference in Scotland would be the moment of truth.

"At the global meeting in Glasgow one year from now, all nations must raise ambition together, or we will all fail together. And failure is not an option."

America's new climate envoy is John Kerry nixed the #KeystoneXL pipeline expansion in 2015, but the project itself has evolved significantly since then, Canada's U.S. ambassador says. #KXL #fossilfuels #climatecrisis

Biden was vice-president throughout the eight years that Keystone XL became a political football for former president Barack Obama. It was a persistent irritant to Canada-U. S. relations and a flagship cause for progressives and environmentalists around the world.

During that time, it came to define the widening fissure between an energy industry that's straining to redefine its mission in the 21st century and a public increasingly opposed to North America's dependency on fossil fuels — a tension that has created deep-seated political challenges in Canada, where the oilpatch is central to the country's economic fortunes.

Biden's campaign left little doubt about his plans back in May, when it finally declared he was "strongly opposed" to the project and would "stop it for good" next year by rescinding approvals issued by President Donald Trump.

That hasn't prevented TC Energy from doing its best to frame Keystone XL as a proposal the Biden administration can get behind, particularly as the U.S. looks for ways to kick-start its pandemic-bruised economy.

The company has awarded more than US$1.6 billion in contracts to American construction firms, work it says will support more than 7,000 union jobs next year, and plans a clean energy training fund worth US$10 million. It has inked an investment agreement with a group representing First Nations in Alberta and Saskatchewan.

The project is designed to ferry up to 830,000 additional barrels a day of diluted bitumen from the Alberta oilsands into Nebraska and eventually to refineries along the U.S. Gulf Coast. Some 200 kilometres of pipe have already been installed, including over the Canada-U. S. border, and construction has begun on pump stations in Alberta and several U.S. states.

"We are constantly evaluating new and innovative ways to reduce emissions and improve efficiencies," Cunha said in a statement.

"We have long been committed to leadership in protecting the environment, while delivering the energy North America needs every day in the safest and most responsible means possible."

Notwithstanding aggressive efforts to slash emissions, fossil fuels will remain an integral part of life in both Canada and the U.S. going forward, said Hillman, which is why Keystone XL discussions need to be part of a broader strategy linking energy and the environment.

"These things exist in an entire context, and that context is one where there is enormous potential for collaboration with the Americans."

A new report from Canada's federal energy regulator noted Tuesday that regardless of those efforts, oil and gas is likely to remain a factor for decades to come.

"Achieving net-zero (greenhouse gas) emissions by 2050 will require an accelerated pace of transition away from fossil fuels," the report says.

But the report projects that even with many more policies to curb emissions than are currently in place, oil and gas would still make up nearly two-thirds of energy sources three decades from now.

Canada's Ambassador to the U

Canada's Ambassador to the U.S. Kirsten Hillman: "The project itself is not the same project; the company itself, (TC Energy), has made enormous innovations; and the sector is enormously innovative — they're cutting their emissions in important ways."
Codswallop.
The emissions from the pipeline operation itself are not the issue. New export pipelines enable oilsands expansion.
Oilsands emissions do nothing but climb year after year.
Oilsands expansion will prevent Canada from meeting its inadequate targets for decades.
The industry's climate plan is a plan to fail.
*
Hillman: "Canada, too, has evolved since then, she said, having established a long-awaited carbon-pricing system and committed to virtually eliminating emissions in 30 years"
Setting distant targets that you have no intention of meeting is just political gamesmanship. The federal govt has so far failed to provide a roadmap for reaching its targets. Canada is on track to miss its 2030 target by miles.
Canada's carbon price is too low to be effective. As the federal govt knows, the price on carbon pollution needs to be far higher:
"Secret briefing says up to $300-per-tonne federal carbon tax by 2050 required to meet climate targets" (National Post, Mar 30, 2017)
news.nationalpost.com/news/canada/canadian-politics/secret-briefing-says-up-to-300-per-tonne-federal-carbon-tax-by-2050-required-to-meet-climate-targets
*
John Kerry: "At the global meeting in Glasgow one year from now, all nations must raise ambition together, or we will all fail together."
The oil industry, its government partners, and oil-soaked politicians are banking on failure.
Carbon Tracker 2019: "Every oil major is betting heavily against a 1.5 degree C world and investing in projects that are contrary to the Paris goals."
*
"TC Energy spokesman Terry Cunha described Keystone XL as setting 'the standard for responsible and sustainable energy infrastructure development'. … Notwithstanding aggressive efforts to slash emissions, fossil fuels will remain an integral part of life in both Canada and the U.S. going forward."
Nothing "responsible" about banking on the IEA's climate disaster scenario. In an age of rapid climate change, there is no responsible expansion of fossil fuels.
*
Too many stenographers, not enough journalists. The Canadian Press failed to interview critics to provide pushback.

The UN, the Organization for

The UN, the Organization for Economic Co-operation and Development (OECD), and the federal Environment Commissioner all issued warnings in 2017 that Canada is NOT on track to meet its targets. The main obstacle? Rising oilsands emissions.
OECD: "Without a drastic decrease in the emissions intensity of the oilsands industry, the projected increase in oil production may seriously risk the achievement of Canada's climate mitigation targets."
Mark Jaccard, SFU: "National studies by independent researchers (including my university-based group) consistently show that Mr. Trudeau’s 2015 Paris promise of a 30% reduction by 2030 is unachievable with oilsands expansion.
Even if the oil & gas industry were to magically eliminate its upstream GHG emissions, that effort fails to address the 80-90% of emissions that occur at the consumer end during combustion.
We don't have a fossil fuel future. The sooner we accept reality, the sooner we can start building our sustainable 21st century.