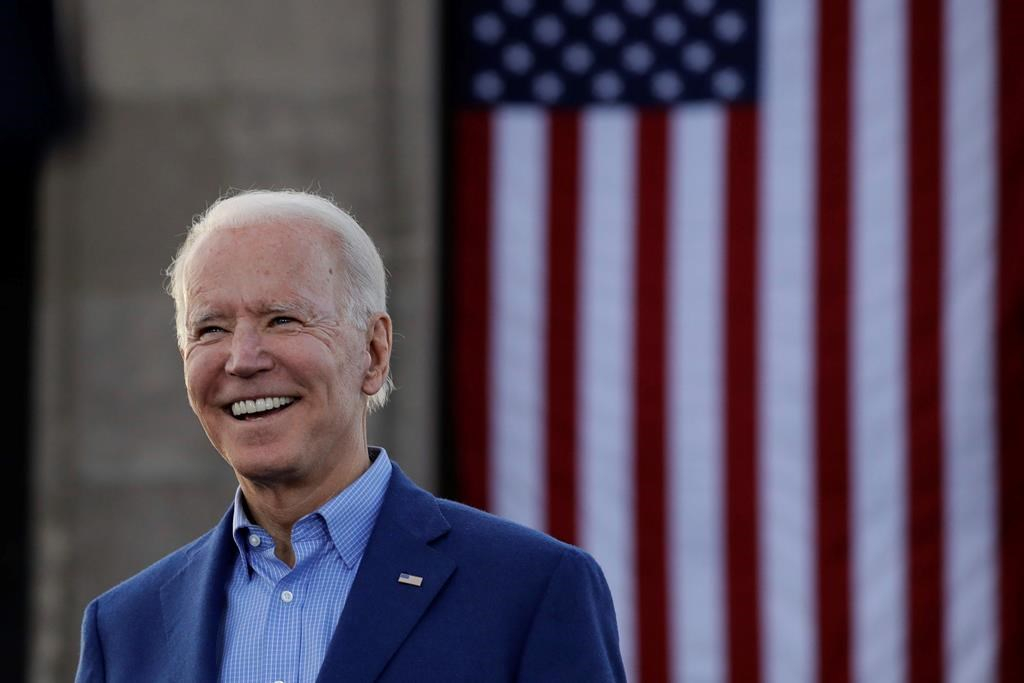 Joe Biden's campaign lobbed a spanner into Alberta's post-pandemic economic recovery strategy Monday with a promise to rip up U.S. President Donald Trump's approvals for the Keystone XL pipeline if the former vice-president succeeds in taking over the White House next year.

Campaign officials finally ended the presumptive Democrat nominee's months of self-imposed silence on how he would handle the politically sensitive expansion project, an ambitious, 1,900-kilometre heavy-oil line that would move 830,000 barrels of Alberta bitumen each day over the Canada-U.S. border to refineries on the U.S. Gulf Coast.

It wouldn't be the first time that Biden has stood in the way of the Calgary-based TC Energy expansion. As vice-president, he was a key member of Barack Obama's administration, which slow-walked the project — championed by the former Conservative government — throughout Obama's second term before finally blocking construction outright shortly after the Liberals were elected in 2015.

Trump, meanwhile, has spent "every day of his presidency" ignoring the looming climate crisis, making matters worse by pulling the U.S. out of the Paris accord, weakening national fuel standards, and rolling back regulations for air and water pollution, Feldman continued.

"That denial of science ends on Day 1 of a Biden presidency," she said. "Biden strongly opposed the Keystone pipeline in the last administration, stood alongside President Obama and Secretary (of State John) Kerry to reject it in 2015, and will proudly stand in the Roosevelt Room again as president and stop it for good by rescinding the Keystone XL pipeline permit."

TC Energy spokesman Terry Cunha issued a statement late Monday that ignored the comments from the Biden campaign, instead extolling the virtues of Keystone XL as an engine of investment and jobs growth "in a time of unprecedented economic uncertainty and unemployment."

"The project will further stimulate millions of dollars in new provincial, state and local taxes along the pipeline route and also ensures our energy demands are met with North American production improving the security of our domestic supply chains," the statement said.

No other pipeline project has been as extensively examined as Keystone XL, it added, "and every study had squarely concluded it can be built safely and in an environmentally sound manner."

The $8-billion US expansion, long a central element of efforts in Canada to expand export markets for Canadian fossil fuel, has been beset by delays, protests and injunctions almost since its inception. It became a major flashpoint in 2011 when celebrity-studded protests outside the White House helped crystallize environmental opposition to the energy sector.

Trump has repeatedly sought to kick-start the project, signing an executive order in the earliest days of his presidency that was thwarted by a federal judge in Montana who concluded the State Department had not adequately assessed the potential environmental impact of the project.

The president signed a fresh permit in March that not only cleared the way for construction, but also appeared designed to prevent further legal problems with State Department permits. But again, a Montana court halted the project on the grounds that the impact on endangered species in the state hadn't been properly assessed.

In the meantime, Keystone XL has come to define the widening fissure between an energy industry that's straining to redefine its mission in the 21st century and growing public opposition to North America's dependency on fossil fuels — a tension that has created deep-seated political challenges in Canada, where the oilpatch is central to the country's economic fortunes.

"Rejecting the Keystone XL pipeline is the touchstone of any meaningful plan to address the climate crisis," said Tamara Toles O'Laughlin, the North American director of 350 Action, the political wing of climate-justice group 350.org.

"Tribal nations, farmers and ranchers, and many other communities who have resisted Keystone XL for more than a decade know this pipeline would derail all plans for climate survival and adaptation."

Alberta Premier Jason Kenney has committed $1.5 billion to the expansion, along with a $6-billion loan guarantee, as his United Conservative government extends outreach efforts in the U.S. in hopes of breathing new life into a sector hit hard in recent months by record-low oil prices and the economic impact of COVID-19.

Without it, the U.S. would remain dependent on heavy crude from places like Venezuela and subject to the sort of market instability triggered in March by a dispute between Russia and Saudi Arabia, she added.

"Rather than speculating about the outcome of the U.S. election, we will spend our time continuing to meet with our U.S. allies and speak to Alberta's role in supporting North American energy independence and security."

During a roundtable discussion last week hosted by the Canadian American Business Council, Kenney said his government would be investing "significantly more" in expanding Alberta's footprint in the U.S. to more effectively advance the province's energy interests.

This report by The Canadian Press was first published May 18, 2020.

Please note: renewables are the only energy source worth investing in.
More crap from C P. pretending solar and wind and geothermal dont exist to save them from(horror) dependence on S A or Venezuelan oil