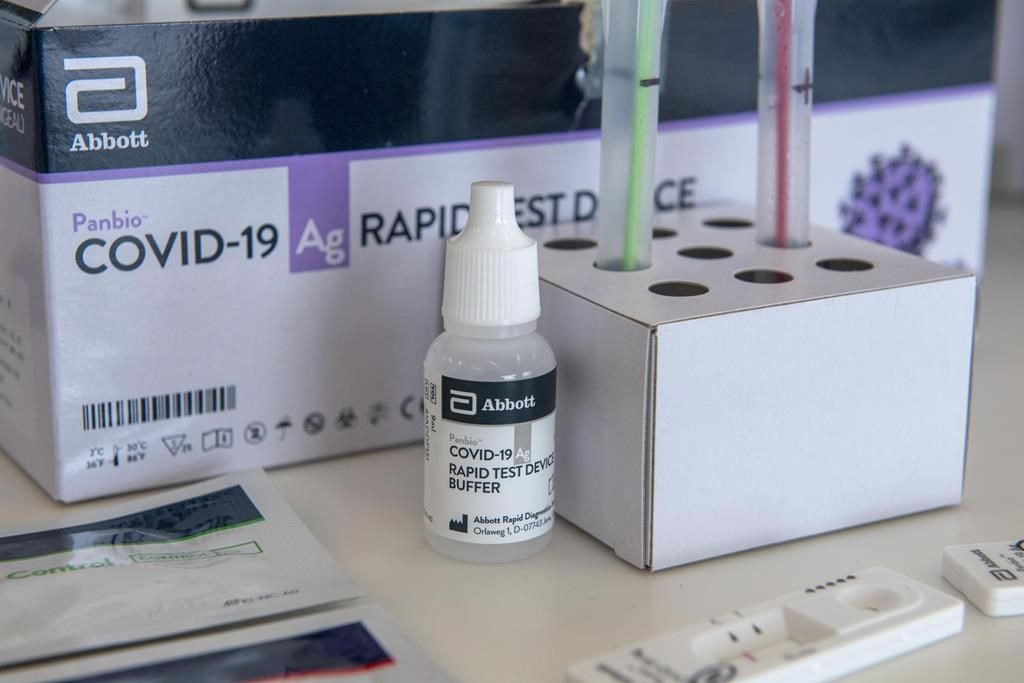 COVID-19 Rapid Test Device kits at Humber River Hospital in Toronto on Tues., Nov. 24, 2020. New tests, treatments and vaccines for COVID-19 have been developed in an unprecedented rush since the pandemic began. File photo by The Canadian Press/Frank Gunn
Previous story

The head of a Canadian biotech industry association says Canada can and does make vaccines — just not the ones expected first to help stop the COVID-19 pandemic.

Prime Minister Justin Trudeau created a firestorm Tuesday when he said Canadians will have to wait a bit to get vaccinated for COVID-19 because the first doses off the production lines will be used in the countries where they are made.

So while vaccinations might start next month in the United States, the United Kingdom and Germany, it will be January at the earliest before any doses are injected in this country.

Canada, said Trudeau, "no longer has any domestic production capacity for vaccines" and it makes sense that the countries that do will prioritize their own citizens.

Andrew Casey, the CEO of BioteCanada, told The Canadian Press Wednesday that Canada does produce vaccines but the technology for the leading COVID-19 vaccine candidates is so new, the manufacturing capacity is being built alongside the vaccines themselves.

"This is the first time the technology has actually been applied," he said. "So you have to then build the facility to manufacture at scale, which is a challenge."

While pharmaceutical company Sanofi has a vaccine plant in Toronto and GlaxoSmithKline has one in Quebec, both make protein-based vaccines, such as the more familiar ones Canadians get every year for the flu.

Canada has spent more than $1 billion to pre-order seven different developing COVID-19 vaccines, and only one being developed jointly by Sanofi and GlaxoSmithKline uses the protein technology.

The first two vaccines expected on the market, from Pfizer and Moderna, each use genetic material known as messenger ribonucleic acid or mRNA. A third with promising trial results, from AstraZeneca, uses a modified common-cold virus that normally infects chimpanzees. Each type trains the human body to develop antibodies to SARS-CoV-2, the virus that causes COVID-19.

"One is like making wine, one's like making Coke," he said. "Yes, they both grow in bottles. Yes, you can drink both out of a glass. But the manufacturing processes used for the two is so completely different. You can't just say well, we'll shut down the protein one, and we'll switch over to the mRNA."

The head of a Canadian biotech industry association says Canada can and does make vaccines — just not the ones expected first to help stop the COVID-19 pandemic. #COVID19 #vaccine #cdnpoli

Conservative health critic Michelle Rempel Garner demanded in question period Wednesday that the government explain whether Canada had even tried to convince the companies to make their products here.

Trudeau didn't answer, but if those negotiations happened, they have not been successful.

Pfizer is expanding production facilities in Kalamazoo, Mich. and Puurs, Belgium to produce most of its vaccine. The company has said it is open to others manufacturing it, but that the technology is difficult to transfer.

Moderna has a 10-year exclusive agreement with Swiss-based Lonza Group AC to make its vaccine, mainly in facilities in New Hampshire and Switzerland. Lonza chairman Albert Baehny said earlier this month the new technology meant Lonza had to remake its production lines "from scratch."

AstraZeneca, which has promised three billion doses of its vaccine, has signed contract deals with at least two dozen manufacturers around the world to produce its vaccine but not in Canada.

A spokesman for Innovation Minister Navdeep Bains said the biomanufacturing sector has been declining in Canada since the mid-1980s.

"When this pandemic began Canada had no flexible, large-scale, bio-manufacturing capacity suitable for a COVID-19 vaccine," said John Power.

He said Canada has been working with experts to address the issue and has made investments, including $140 million in a new National Research Council plant in Montreal.

The NRC said Wednesday the Biologics Manufacturing Centre will be finished next July. It doesn't have an agreement yet to produce a specific vaccine, but is being built so it can produce several biologic vaccines, including of the type being made by AstraZeneca. It will not be able to make mRNA vaccines like those from Moderna or Pfizer.

It is supposed to be able to produce two million doses a month before the end of 2021.

A spokeswoman for GlaxoSmithKline told The Canadian Press the company's Ste-Foy, Que., plant will be part of production of the GSK vaccine eventually but timelines and specifics aren't yet available.

A Canadian-made vaccine from Quebec-based Medicago is also expected to be in production in Canada next year.

Medicago CEO Bruce Clark said the company has been able to adapt a vaccine for influenza to target COVID-19 instead, noting such an adaptation is one of the advantages of biologic vaccines. But Clark said one of the disadvantages is that it's harder to transfer the technology of biologics to be made in other places.

Medicago has facilities in Quebec and North Carolina and is building a new one in Quebec. The existing ones can make about 50 million doses by the end of next year, while the new plant will be able to do as many as a billion annually.

The company has been talking to the federal government for years to get funding for a "full-scale manufacturing facility," he said.

"We were not successful," said Clark. "It's really only been in the context of the pandemic that we've seen funds be freed up to commit to capacity in Canada."

Last month Ottawa agreed to provide $173 million to Medicago for research on its vaccine and construction of an expanded facility. Clark said the 2023 completion date for the new plant could be bumped up with more money.

None of the vaccines in question have finished clinical trials and all must also be approved by Health Canada before they can be used here.